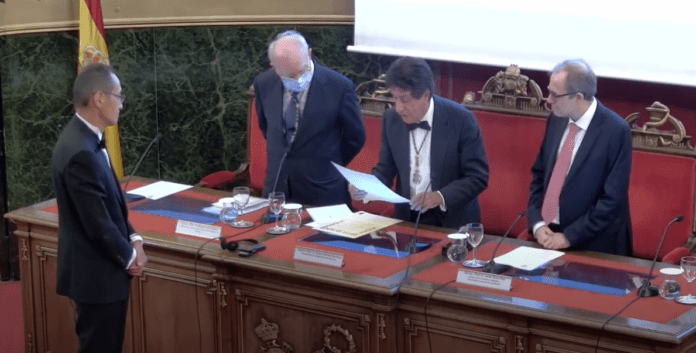 The Royal National Academy of Medicine together with the Fernández Cruz Foundation received this Thursday Shyna YamanakaNobel Prize in Medicine and Physiology 2012 already Juan Carlos Izpisuaprofessor and director of the Institute of Science in San Diego California within Altos Lab. Both were recognized at the XLI Fernández-Cruz Memorial Lecture for their important role in the cell reprogramming and research against aging and the prevention of diseases associated with it.

Thus, in a ceremony presided over by Eduardo Diaz Rubiooncologist and president of the Royal Academy of Medicine, and Arturo Fernandez Cruzpresident of the Scientific Committee of Fundamed and of the Fundación Fernández-Cruz, have awarded Nobel Yamanaka the title of honorary member of the Academy and Izpisua the medal of honour.

In addition, the Foundation delivered a Memorial Award to Professor Rick Klausnerdirector of the research center The High Labsa private entity specialized in the research to reverse aging.

15 years ago the Japanese scientist, Shyna Yamanaka and his team were able to convert skin or blood cells to the previous embryonic state, being able to manufacture a new type of stem cells, called IPS. The discovery of these induced pluripotent stem cells means that they can be reprogrammed to develop as part of any tissue in the body.

This was the beginning of regenerative medicine, leading to the creation of Kyoto University, a new institute for search for new medical applications to IPS cell research.

As Yamanaka indicated in his speech, today there are two existing medical applications for this technology. First of all, the regenerative medicine with cells and on the other hand, the drug development.

At the event, the Nobel Prize winner explained how, through this technology, it was possible to reverse blindness in patients with age-related eye degeneration in the retina of the eye. The scientists, specifically Masayo Takahashi, generated IPS cells from the patient’s own skin cells for retinitis pigmentosa.

“They are pigmented cells and from this constitution of new retinal cells, it was possible to transplant them again to the patient’s own eye following the models”

This was the first clinical trial using human IPS cells in pathology, in which, in addition, there were no serious complications of tumorigenicity, nor immune rejection. So the outcome of the case was published in New England magazine in 2017.

However, to solve some practical problems, they decided to follow another approach: create a stock of IPSpluripotent cells in stock from healthy donors, solving the problem of immunological rejection beforehand and making the immunological type of recipient donors as compatible as possible.

The second aspect of the IPS has to do with the drug development. In this sense, Yamanaka has advanced the next challenges of his research group, among them, four clinical trials for amyotrophic lateral sclerosis (THE A).

This “devastating” disease that produces the progressive death of motor neurons and patients lose the ability to move, can now be investigate this cell death using IPS from skin patients and manufacturing skin motor neurons.

“We were surprised when we tried to regenerate from the IPS of the patients and the motor neurons began to die, they died. Something that did not happen when we manufactured healthy IPS motor neurons”

In this sense, the Japanese scientist put on the table the phase I trial of one of his researchers, Harushia Inouethat Using this technology, he managed to stop the disease in 5 of the 9 patients who participated in the trial.

Shyna Yamanaka concluded her speech highlighting the fantastic decade she had lived in research and pointing out “the new horizon” that we have thanks to Juan Carlos Izpisua. “We know that those same four factors that we used to induce cells can also rejuvenate cells in our body.”

The Spanish hallmark of cellular rejuvenation

The careers of Izpisúa and Yamanaka have run into each other on several occasions. The last one was this year, when the Spaniard managed reverse aging in middle-aged mice and the elderly by partially restoring cells to more youthful states.

The Spanish researcher has discovered a class of RNA that accumulates in the nucleus of the cells of people with progeria, a disease that causes premature aging of the body. Blocking this RNA has managed to reverse the symptoms of the disease in mice, prolonging their lives.

In its turn, Juan Carlos Izpisuadirector of the San Diego Institute of Science made it clear that beyond our genome, there is another level of control called epigenome. This is made up of all those marks that, as life progresses, are added and modify our genome and the expression of our genes.

“Independent of those alterations that occur in our genome over time, and of the mutations that we have or acquire, perhaps by modifying the epigenome, one can deal with the disease”, he indicates.

In this line, he explains that it is not that they correct the mutation that causes the disease, but that tThey try to increase the level of resilience to be able to deal with that disease in a more appropriate way.

Juan Carlos Izpisuadirector of the San Diego Institute of Science.

All in all, Izpisúa concludes by pointing out that “we are facing a new medicine that tries to attack a disease in a general way so that we can fight with all diseases”.