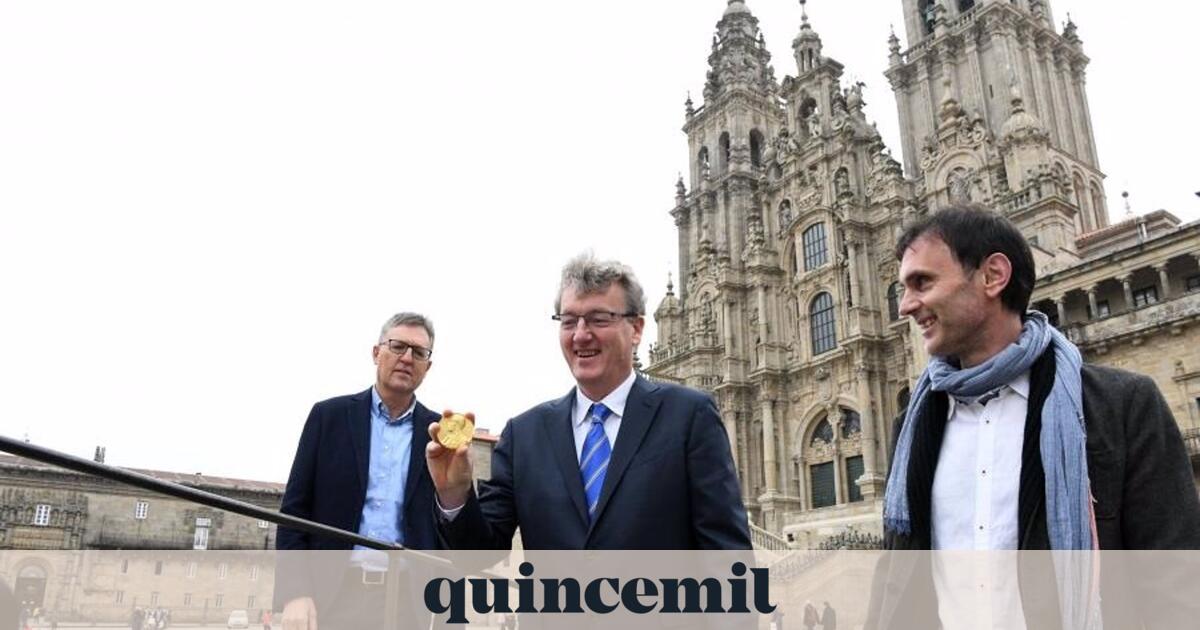 The Nobel Prize in Chemistry 2021, David MacMillan, has claimed this Tuesday in Santiago de Compostela that “all countries need to invest more in science and that investment be diverse”.

A claim that has been proclaimed in a new act in Galicia, a place that he has defined as “special” and “generous people”. Partly due to this good assessment of Galicia and Galicians, the Scot has not hesitated to teach and share in a meeting with the media, at the headquarters of the rectorate of the University of Santiago de Compostela (USC), the medal of the Nobel.

A detail that he has also had with the corporation of the City Council of Santiago, where he has signed in the Book of Honor of the consistory, and earlier this Monday with the students of the Sánchez Cantón de Pontevedra institute, with whom he chatted in a colloquium.

The Princeton University scientist, born in Bellshill (Scotland) in 1968, accompanied by the Professor of the USC Department of Applied Physics, Jorge Mira, and the director of the Singular Center for Research in Biological Chemistry and Molecular Materials (CiQUS), José Luis Mascareñas, explained to those present the discovery that led him to win the international award: asymmetric organocatalysis, a third pathway of catalysts based on small organic molecules.

Together with Benjamin List, MacMillan discovered that, in addition to enzymes and metals, catalysis could be carried out by compounds that do not carry metals, which has meant the revelation of a “greener” method. Thus, certain chemical substances become much more valuable products, both environmentally speaking and economically, in addition to having enormous relevance at an industrial level, “especially for the pharmaceutical industry.”

But how did you come to that conclusion? David MacMillan has explained that when he was doing his graduate degree at Harvard he was working with metallic catalysts and many of them were sensitive to air, Therefore, it had to be used with great caution. Therefore, he considered this to be a problem and decided to work on something else. At the time, Macmillan thought that if the human body uses catalysts all the time they’re in the air, “why can’t we do the same?”

In this way, he decided to use “small organic molecules” that can also be recycled and discovered this third way that allows avoiding the use of metals.

The companions of the Nobel this Tuesday, Jorge Mira and José Luis Mascareñas, They have defined him as an “exceptional” scientist and a “very close” person. Something that the director of CiQUS has summed up, between laughs, in “a normal person”.

Likewise, he has said that he loves Galician wine and, although he has acknowledged that, despite having been in the United States for longer than in Scotland, he still feels “very Scottish” and his heart goes out to Glasgow football club Rangers.

David MacMillan has also made mention of his university years and, questioned as to whether that young chemistry student in Glasgow dreamed of one day being a Nobel Prize winner, has ruled with a resounding “no”, while cheerfully acknowledging that “honestly” maybe “I wasn’t even planning on finishing college.”

In relation to the impact of these awards and how his life has changed since he was awarded this recognition in October 2021, the Scotsman hHe has defined the situation as “very rare” and added that “one day you are a chemist and the next day they call you a ‘celebrity'”.

Return of the program “ConCiencia”

The Nobel Prize winner is currently in Galicia within the framework of the “ConCiencia” outreach programme, led by Professor Jorge Mira, who ise has been happy for the return of this project, which had been without activity for two years due to the pandemic. An “extraordinary” program that places science on the street and makes people aware of the importance of this subject, in the words of José Luis Mascareñas.

In this sense, Mira has valued that ConCiencia is nourished by the contact networks that the USC has and sponsors such as Mascareñas, which he has defined as “the main figure of Galician and Spanish chemistry”, for his work and for inspiring a “leading center” such as CiQUS in Galicia.

More acts of the Nobel Prize

David MacMillan will give this Wednesday, at 7:30 p.m., the conference “Chemistry as a passport to the world: the road from Bellshill, Scotland, to the wonders of invention and discovery”. The exhibition will be open to the public until full capacity is reached at the Abanca Auditorium, in Santiago de Compostela.

Before, MacMillan iwill inaugurate the celebration of the ten years of the Singular Center for Research in Biological Chemistry and Molecular Materials (CiQUS) of the USC with the 1st “Chemistry on the Border” Symposium in the Fontán Building of the Cidade da Cultura starting at 12:45.