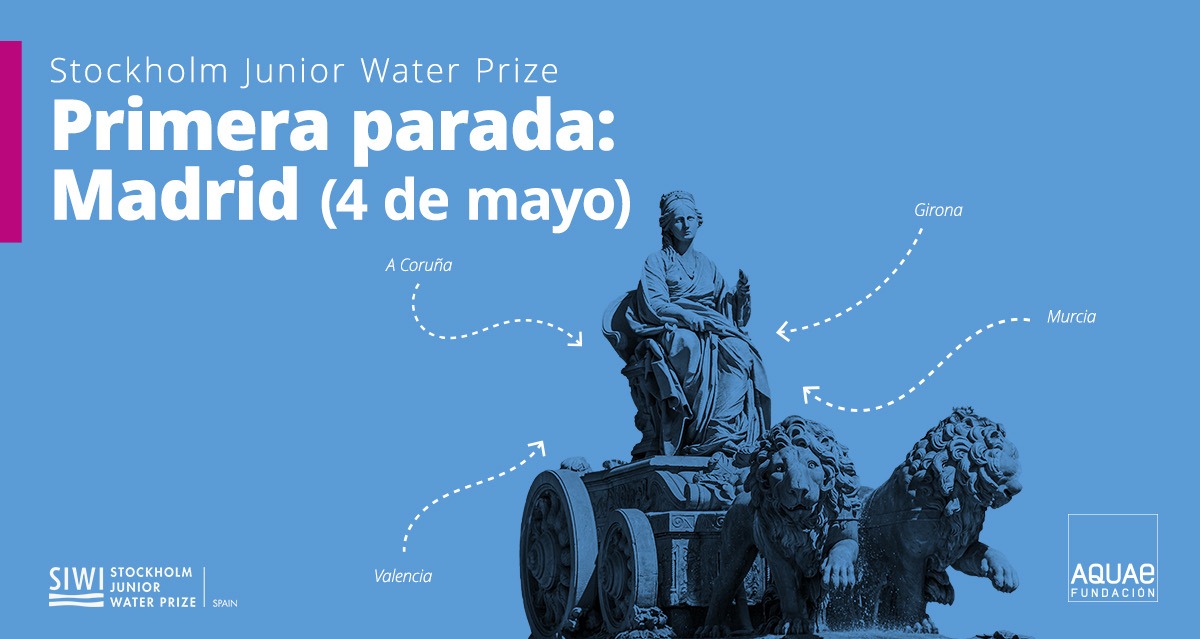 for young people between the ages of 16 and 21, which, each year, receives more than 10,000 research projects on water and sustainability from 35 countries

Murcia, April 18, 2022.- The national competition of the Stockholm Junior Water Prize (SJWP), considered the youth ‘Nobel Prize for Water’, has already selected the four finalists of the 2022 edition. The national phase, organized by the Fundación de Hidrogea, Fundación Aquae, has a student from the IES Los Albares de Cieza, Fernando Piñera, who will compete with the work “Las Norias de Abarán: the turn of physics for energy saving”.

According to their results, the use of the waterwheels would mean a saving of €54,568.25 per year. Therefore, Piñera points out, “it can be concluded that the waterwheels in the town of Abarán represent an alternative method to electric lifting motors, since the use of these historic wheels prevents the emission of quantities of COtwo that contribute to current climate change and the greenhouse effect.

The young student from Cieza will compete with the rest of the finalists for winning the award at a conference organized by the Aquae Foundation, where they will present their projects to a jury of experts who will choose and announce the winner next May.

The rest of the finalists are Juan de Marco, a 2nd year Baccalaureate student at IES El Clot (Valencia); Anna Esteve, from the INS Pere Borrell Educational Center, in Puigcerdá (Girona); and Esther Suárez and Diego Castro, students from the Isidro Parga Pondal Scientific-Technological Classrooms center (A Coruña). The four finalist works coincide in their objective: to find solutions to combat the problems that threaten the environment and people’s lives.

From Madrid to Suecia

The oral presentation and defense of these projects, which will take place at the headquarters of the Aquae Foundation in Madrid, on May 4, will be carried out by their authors through an audiovisual presentation lasting about 20 minutes, followed by a debate with the members of the jury of the Spanish edition. Chaired by Professor Rafael Mujeriego, Emeritus Professor of Environmental Engineering at the UPC, and made up of Amelia Pérez Zabaleta, director of the Water Economics Chair at the AQUAE-UNED Foundation; Jaime Pérez del Val, head of the CSIC’s Scientific Culture Area; Emma Fernández, director of telecommunications companies, and David Calle, creator of the educational channel Unicoos, the Jury will decide the winning project of the national phase.

The author of the award-winning work and his tutor will travel to the capital of Sweden to compete in the international phase of this Award, which will take place in August, after which the winning project of the SJWP 2022 will be chosen.

The world edition of the Stockholm Junior Water Prize is organized by the Stockholm International Water Institute (SIWI), whose objective is to reward great ideas that help improve people’s quality of life by improving water quality, of water resources, the protection of this resource or the treatment of drinking water or residual water.

AQUAE Foundation is the water foundation. A non-profit organization created in 2013 with the aim of promoting initiatives against climate change; promote and support talent and innovation. Work like a think tank which aspires to awaken concern, creativity and a collaborative spirit to achieve a sustainable social, economic and environmental model.www.fundacionaquae.org