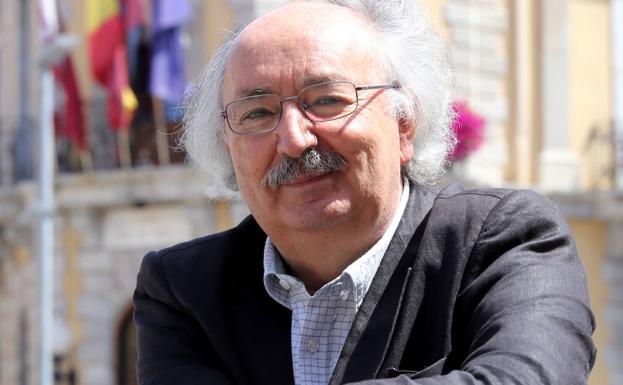 The poet Antonio Colinas in the Plaza Mayor of La Bañeza. / Ruben Cacho

The poet from Bañeza signs a new volume of a project that has been going on for 36 years, where he combines aphorisms, thoughts, prose poems, travel books and diaries

«I started working on ‘Treaty of Harmony’ in the early days of 1986. (…) I don’t think one can speak of ‘thoughts’ when judging the genre of this book. Aphorisms, reflections, impressions, contemplations? Perhaps I would decide on this last meaning, since almost all the parts of the book were born from an objective and serene contemplation, from an impression lived unhurriedly in the midst of pure nature».

With these preliminary words, in 1991 Antonio Colinas presented the first installment of his ‘Treaties of Harmony’, a “testimony of a life” that has just reached its fourth installment, after the publication in 1999 of ‘New Treaty of Harmony’ and in 2010 of ‘Three Treaties of Harmony’. Always hand in hand with Tusquets, the poet from Bañeza, who settled decades ago in Salamanca, now deepens with ‘Treaties of Harmony’ in what is perhaps his most personal literary and vital project with more than 200 new pages added to the three treatises which are also included in this new book, somewhat “revised and polished” by the author.

«I have always worked in various genres, with a special predominance of poetry, which offers us an ideal language to transmit things, but at that time I began to write a series of different texts, which we could consider as aphorisms or thoughts, fragments of a trip or diary, or even prose poems. Those moments, which arose from special situations, led me to start this series of texts that I always recommend”, explains the poet to Ical.

Colinas explains that “this book is a testimony of a life, because there is a lot of life in it, especially from the years in Ibiza, with that protagonism of nature, but there is also the constant dialogue of my origins, of our land, with that Mediterranean world with which I came into contact in the four years in Italy, and which now sometimes appears. It is also a travel book in two ways, physical and interior », he underlines.

Thus, this fourth treatise on harmony, which is by itself as voluminous as the previous three together, is made up of five independent chapters. The first is dedicated to ‘A reading of Pasternak’, where the author of ‘Sepulcher in Tarquinia’ approaches the Russian Nobel Prize, reeling off his masterpiece (‘Doctor Zhivago’) to vindicate «the independence of the intellectual against the barbarity of the war”, a theme sadly “very much alive” today, after the Russian invasion of Ukraine.

Next, in ‘The advanced autumn of life’ he invites the reader to “impose another rhythm on life”, going through some personal readings or rereadings accompanied by his favorite musical accomplices, while the harshest days of confinement slip between the pages (“In these weeks of seclusion there are days, hours, moments, in which it seems to me that my life is a blank page,” he writes).

The volume then dedicates two separate chapters to two trips that Colinas made to Israel and Palestine (which he includes in his ‘Jerusalem Notebook’) and to South Korea (‘En la Montaña Kumgang’, which he qualifies as “the top of the tops, a sacred mountain for all, that knows no centuries, nor conflicting words, nor extreme ideologies”), with which he considers closed “what there may be of a story in the book”. It was the outbreak of the pandemic, precisely, that made him look for a different closure to the volume, which concludes with the section ‘On Breathing’.

«Throughout my life I have worked a lot with the fact and the theme of breathing. In line with the current situation, I thought that the closing would have to be related to it, not only with physical breathing, because if you don’t breathe sick and die, but also with that inner breathing, breathing the rhythm of the poem, with the idea of ​​harmony in short, that it is not only born from a pleasant state, of fullness, but that it comes after difficulties, trials or the death of loved ones. That is when harmony appears, which is not a term to accept lightly », he reflects.

After warning him that in Central American countries such as Honduras or El Salvador they use the term harmony as a synonym for curiosity, Colinas acknowledges that in his ‘Harmony Treaties’ “there is a lot of searching.” «Poetry is a way of being and being in the world, but it is also a search, it is a way of knowing. The reader will see that in this book I ask myself many questions, for some I have found an answer and I hope that the reader will also find it », he points out.

In the final coda of the fourth treatise, Colinas invites the reader to “look inward and breathe”, something that, as he himself admits, “in these times is perhaps difficult.” “What matters is the golden moment, the present. As Machado said, the past no longer exists and the future has not yet arrived, so when one is locked up there is no choice but to look and travel within, and in this interior journey the practice of physical breathing counts a lot and also existential, of an orphic character”, he points out.

In his ‘Harmony treatises’ the reader will recognize the “global vision of a different life”, the one that the author has “humbly” had to live, since in his childhood he already perceived that “he saw everything in a different way”. That initiatory moment gave way in adolescence to the “outburst of poetry and writing”, after which his whole life has been “subordinated to the testimony of writing”.

«Among other things, the reader will find in these pages an ‘extraterrestrial’ life, the life of a person who apparently is out of reality but, as I always say, the poet is not only not out of reality, but works with reality, and in the book you can see how that reality assails us every moment. Especially when the presence of ideological totalitarianism of one sign or another appears in the last parts, which lead to wars like the present one. That is why, coincidentally, the book has a certain topicality at the moment », he concludes.