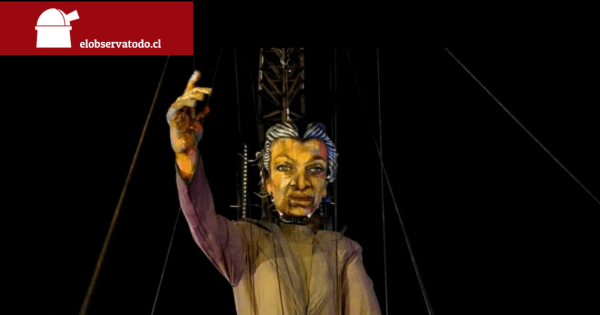 Tour of the giant puppet of the poetess, an international show.

Expectation exists in Coquimbo for the arrival of the great Gabriela Mistral of 5.20 meters which will tour the main arteries of the commune-port with its poetry-making machine and live music.

This explosion of culture is part of the work”Gabriela del Elqui, an explosion of poems”, a high-quality show with lights, which will mean the return of massive events to the territory, after several months with activities suspended due to the pandemic.

The parade will begin on Avenida Videla, in front of the Roofed Gymwhere a minibus will depart with live music, lights and fire to look for Gabriela’s puppet, who will be asleep waiting at the intersection of Avenida Videla and Varela.

From there the show will continue throughout Videla avenue until finishing at Plaza Vicuña Mackenna in the English neighborhood, culminating with “The Return of the Teacher to the Port”. Tour in which the community can participate and that will be broadcast on the social networks of the Municipality of Coquimbo.

To carry out all the work, the Municipality of Coquimbo together with Carabineros organized an entire operation that involves the closure and diversion of streets. A) Yes, From 7:00 p.m., Avenida Varela will be completely closed from the intersection of Calle Matta with Avenida Videla to Plaza Vicuña Mackenna.

Provisional diversions supported by Police and Citizen Security officials will be established at the intersections of Avenida Varela such as Henríquez, Portales, Alcalde, Garriga, Borgoño, Bilbao, Las Heras, Benavente and Melgarejo corner Sierra.

In addition, the community is called to prefer alternative routes to enter Coquimbo from 7:00 p.m. to 10:00 p.m., time of travel through the streets of the city.

Mayor Ali Manouchehri highlights that after several months in which, due to the increase in infections by Covid-19 that kept us in Phase 2, a large number of artistic and cultural activities had to be suspended, that is why this parade “means the return of culture and entertainment to the streets of Coquimbo with the tour of Gabriela Mistral’s giant puppet through our city. I want to invite you to participate in this unique event for the whole family that enhances, in a magical way, the work of our Nobel Prize winner”.

The project in charge of company Plexus Solaris It involved several years of work and design of the puppet and coordination with actresses and actors who will transmit the poet’s sensitivity to the social environment and many international special effects.

“This strengthens the artistic proposal from a work that articulates various disciplines. For example, in the special effects team is Luis Catalán, who worked with the companies La Gran Reyneta (2005-2016) and Royal De Luxe (2005-2011) in Chile and France, places where he developed various special effects techniques for large events in large spaces”, said Claudio Vega, Director of the Plexus Solaris Company.

Another important aspect that the show aims to convey is the sensitivity of the social environment represented by the figure of Gabriela Mistral, for this, “Francisco Mancilla, stage communicator of the project and who was a collaborator and student of Humberto Maturana, has played a relevant role to build an original identity for Gabriela Mistral that highlights her human dimension. A similar contribution is made by Aiksa, a self-taught technical and scenic actress in circus, butoh dance, contemporary dance and scenic atmosphere.”, adds the director.

In this same sense, this comprehensive event brings an interesting musical proposal led by the outstanding composer, musician and performer, Jorge Martínez, who has 30 years of experience. He is part of the Teatro del Silencio (France), part of the team of the Chilean National Theater and of the Plexus Solaris Theater Company: Manufacturers of Dreams.

Coquimbo prepares its streets for the passage of the great Gabriela