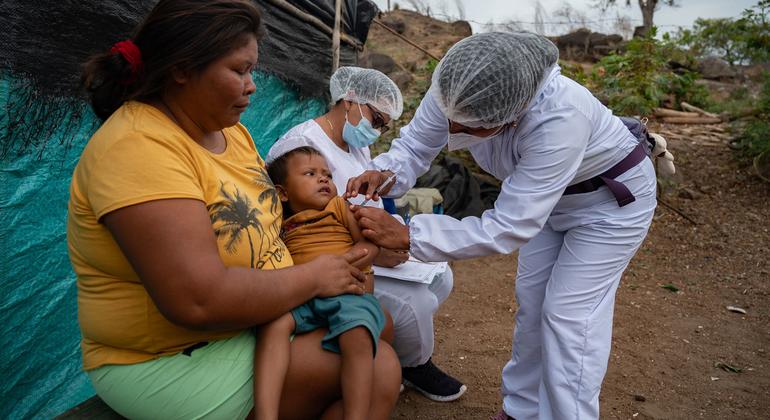 WHO maintains COVID-19 as a global public health emergency

The World Health Organization has decided to keep COVID-19 a global public health emergency even though deaths from the virus have fallen to their lowest level since the early days of the pandemic.

The world recorded more than 22,000 COVID deaths for the week which ended on April 10, the lowest level since March 30, 2020. The WHO first declared COVID-19 a global health emergency on January 30, 2020, just over a month after the appearance of the coronavirus in Wuhan (China).

WHO Director-General Dr Tedros Adhanom Ghebreyesus said the decline in COVID deaths is good news, but some countries are still seeing a spike in cases.

“Far from being the time to lower our guard, it is the time to work even harder to save lives. “Specifically, this means investing so that the tools of COVID-19 are distributed equitably and, at the same time, we strengthen health systems,” Tedros told a press conference in Geneva.

1.4 million people in eastern Ukraine do not have access to running water

A burned out truck in Bucha, on the outskirts of Kyiv, Ukraine

Some 1.4 million people in eastern Ukraine do not have access to running water and another 4.6 million people across the country are at risk of losing supply after six weeks of war following the Russian invasion.

According to UNICEFIn eastern Ukraine alone, there have been at least 20 separate incidents that have damaged water infrastructure. Intensifying fighting in the east and the widespread use of explosive weapons in populated areas threaten to further decimate the water system, which is now at risk of complete collapse after 8 years of low-intensity conflict.

Power outages have stopped water pumps, and explosion damage to pipes is disrupting the flow of water.

“The health risks, especially for children and the elderly, caused by water cuts are serious, as people are forced to use dirty water sources, leading to diarrhea and other deadly infectious diseases“, said Osnat Lubrani, m UN representative in Ukraine.

In Mariupol, thousands of people are drinking dirty water. Major cities in Donetsk and Luhansk regions are also without water supply.

The activist Nadia Murad has presented at the Security Council guidelines on how to collect evidence from survivors and witnesses of sexual violence in conflict safely and effectively.

Murad, who won the Nobel Peace Prize in 2018 for her work to end rape as a weapon of war, she was tortured and raped when she was kidnapped by the Islamic State.

The guidelines aim to reduce the risk of causing further harm to women when they provide tests.

“The Murad Code sets out clear and practical guidelines to focus on the needs of survivors when collecting evidence, and ensure they receive justice and support, rather than repercussions. Survivors deserve at least that,” she said.

The announcement came as the UN denounces increasing reports of rape and sexual violence in Ukraine. The representative of General secretary for sexual violence in conflict called for “rigorous investigations” into the “growing allegations.”

UNESCO has approved the designation of eight new Global Geoparks, a distinction that recognizes geological heritage of international importance.

The list amounts to 177 sites in 46 countries. Two of the new UNESCO Global Geoparks are located in Latin America and six in Europe. Due to pandemic restrictions, new applications from Asia, Africa and the Arab region could not be evaluated this year.

The two new Latin American parks are in Brazil. S’serido it hosts one of the largest mineralizations of scheelite in South America, an important tungsten ore, as well as basalt flows from volcanic activity

The Geopark of the South Canyon Trails, in southern Brazil, is characterized by the Atlantic Forest, one of the richest ecosystems on the planet in terms of biodiversity. In addition, the site has the most impressive canyons in the southern cone.

Two countries, Luxembourg and Sweden, join the Global Network this year with the designation of their first geoparks.