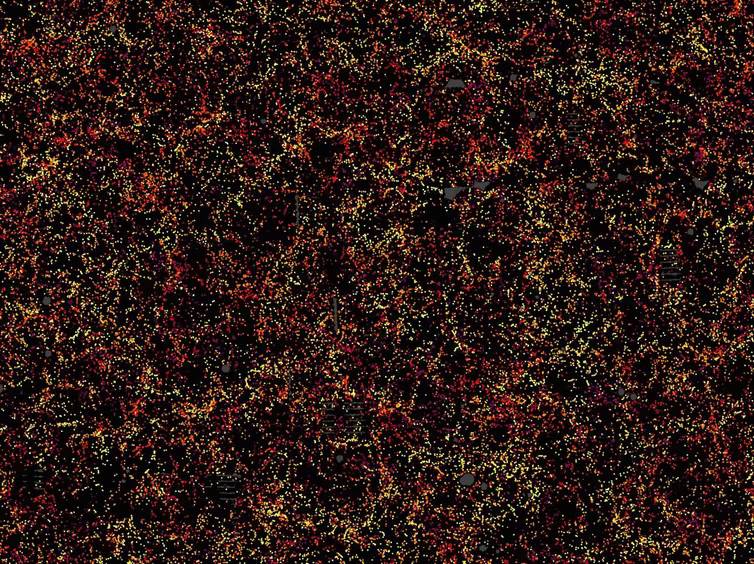 Let’s put in the shaker a shocking title, an ancient question and a few drops of physics. If we shake it well, we will only have to taste it. But will it leave a good taste in our mouths to know what fate awaits the universe? We collect here the witness of all the people who have asked themselves that since ancient times. However, we have an advantage: we can finally provide answers using cutting-edge science and predictions suggest that we could be headed for a violent end, a big rip or Great Tear.

The experimental data fit very well with the big rip, pointing out that it is very likely to happen. The basis is that the universe contains enough dark energy to “stretch” it, expanding it in an increasingly accelerated way. The galaxies will move further and further apart, and the gravitational attraction will gradually become less and less until its effect wears off. Planets and satellites will lose their orbits and stars will be separated from galaxies. Then that Great Tear of the universe will have come.

The large-scale universe is definitely getting bigger and bigger. Specifically, his rate of expansion it’s accelerating. Einstein’s equations indicate that the cause is that it is composed mostly of dark energy, which produces repulsive gravity. But can we refine more?

Let us humbly admit before going any further that our models disguise our ignorance by passing it off as wisdom. In them we imagine dark energy as a fluid described in a very elementary way. We would use variables inherited from the thermodynamics.

On the one hand we would have the pressure of that fluid and on the other its density, that is, the amount of energy per unit volume. If we only had particles with small speeds, that energy would be essentially that of their masses. Thus, it would suffice for us to think of gravitation in the manner of Newton, without depending on Einstein. But that is not possible because in our universe there are also very fast particles, such as photons and neutrinos.

In view of this, we propose then that the universe is a soup of different fluids with their different properties. Thus we make Einstein’s equations tell us about the properties that different fluids must have for accelerated expansion to occur. And not only that, they tell us in what proportions these ingredients should be. Apart from photons (neutrinos and other crap) we will have dark matter in the sector of components that produce attractive gravitation. And they come into conflict with dark energy.

The rate of expansion could become infinite

The most intriguing type of dark energy is the cosmological constant and it represents a very unique barrier. The most usual working hypothesis to describe any of the aforementioned fluids is that pressure and energy density are proportional to each other.

But beware! While the energy density is always positive, dark energy has negative pressure. In fact, it has to be negative enough. The number that governs the ratio of pressure versus energy density plays a crucial role in the solutions of Einstein’s equations. That parameter tells us in the first place if the universe is expanding rapidly or not. In other words, it dictates whether the pressure is negative enough to produce the necessary repulsion.

But even more negative pressure could lead to dramatic behavior: the rate of expansion could suddenly become infinite. In fact, the same would happen to the size of the universe itself (and its scale factor). And that would have catastrophic consequences, destroying all known structures. In fact, everything would be nonsense under these conditions. And also the change of the change would suddenly become infinite.

The possibility of this situation occurring is well known from a theoretical perspective. The surprise is that the Experimental data seem to favor this situation. In other words, there is evidence that the universe could end in a big rip.

Well, it is convenient to make a small nuance to avoid the protests of some colleagues. Depending on the sources consulted, this scenario is not necessarily the one that the statistics most strongly support. But, interestingly, the consensus is that the current range of uncertainty does include the big rip among the very likely final destinations.

Phantom dark energy is to blame

The type of dark energy causing that end of party violent is called dark energy ghost. To offer a little more detail, it is necessary to resort to a system of units chosen for this purpose. Using it we see that the big rip will occur if in absolute value the pressure exceeds the energy density. If they are the same, we are facing a limit case, precisely the famous cosmological constant. This well-known type of fluid was introduced by Einstein. Paradoxically, his goal was to achieve a static universe, without expansion. The genius abandoned him calling it the biggest mistake of his life when Hubble evidenced the expansion of the universe.

But back to what matters. If the universe is going to break into a thousand pieces, what things should we stop worrying about? Will those who still contemplate continuing to pay a mortgage for another 20 years breathe a sigh of relief? I’m afraid I’m not the bearer of good news. The Great Ripping could take about 130 billion years to occur. That is equal to 10 times the current age of the universe.

That estimate is based on selecting a pair of values ​​within statistically valid windows. In the first place, we would say that dark energy represents 70% of the content of the universe. And secondly we would make the relationship between pressure and energy density only 10% larger than for the cosmological constant. And with that, voila! We predict a big rip which will take a long time to arrive.

To fine-tune this entire panorama, we need to have observations of the universe on a large scale in greater quantity and quality. Undoubtedly, the data provided by telescopes will contribute to this. james webb (running) or Nancy Grace Roman (planned), combined with those of other international efforts. And perhaps the most interesting thing is not to solve the enigma of the final destiny of the universe. Neither is the opportunity to solve others that we have not talked about. The truly exciting thing would be the possibility of unknown enigmas emerging. Because, as physicist and Nobel laureate Kip Thorne said, “the right answer is seldom as important as the right question.” (I)