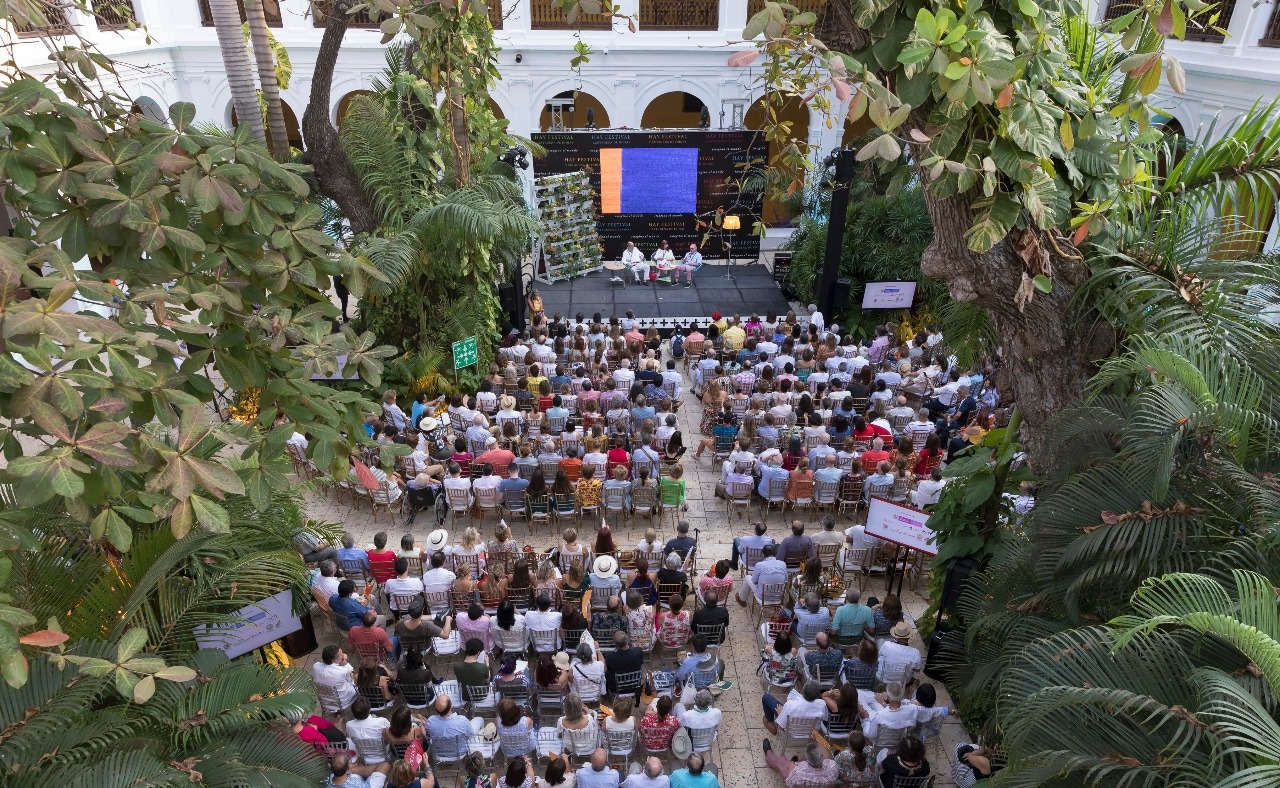 Diario Criterio will be present at the Hay Festival 2022 in Medellín and Cartagena. And in addition to the daily coverage of summaries of the best talks, interviews and videos, we will broadcast several of the festival’s events on Facebook.

To be scheduled, these are the talks that will be available per day:

1. 5:00 pm to 6:00 pm: Presentation ‘In the navel’ – Anna-Lina Mattar and Gala Rocabert Navarro in conversation with Catalina Mejía

The signing of the Peace Agreement with the FARC in 2016 represents a turning point in the contemporary history of Colombia, it marked a milestone of triumph for many and a source of controversy for many others. But, behind what was left on paper, what happened to the people whose lives were given to the guerrillas? The illustrator Anna-Lina Mattar (Germany-Spain) and the anthropologist and sociologist Gala Rocabert Navarro won the Fnac-Salamandra Graphic International Graphic Novel Award for In the belly button. Diaries of war and peace in Colombia (2021), a graphic novel that brings together the experiences of former guerrillas after the signing of the Peace Agreement in 2016. Based on the story of Rocabert Navarro, an anthropologist and sociologist who reports from the field on life after the treaty, the illustrator Anna-Lina Mattar transmits this documented work in images. They talk about their book with Catalina Mejía.

2. 7:00 pm to 8:00 pm: What happens when a glacier melts? – Andri Snaer Magnason in conversation with Germán Poveda Event

Andri Snaer Magnason (Iceland) is one of the great voices of children’s and youth literature in his country, a film director and winner of several prestigious literary awards, including the Philip K. Dick Award 2013 and the Tiziano Terzani 2021 in Italy. He was vice president of the Icelandic Writers Union and even a presidential candidate for his country. his latest book, About time and water, a bestseller in several countries, is a fascinating reflection on the climate emergency. It is a delicate non-fiction narrative work that calls for the responsibility of human beings to preserve our home, this planet. He will talk about these urgent issues with Germán Poveda.

In addition to being the largest social network in the world, Facebook is probably also the one that has been involved in the most controversy, often related to the dissemination of false news, or the political impact it may have had on elections such as the one that led to the power to Donald Trump. The award-winning journalist New York Times Cecilia Kang, who has a history of more than ten years of research on technology and cybersecurity issues, is the co-author of manipulated, a book that reveals the darkest spaces of the social network, whose main flag is to create bonds of friendship between billions of people globally. However, as this work reveals in detail, Facebook systematically engages in questionable practices, such as the sale of its users’ data, disinformation and the proliferation of hate speech. In conversation with Veronica Smink.

Rodrigo García Barcha is a film and television director. He was born in Bogotá, but grew up in Barcelona and Mexico City, close to some of the most important figures in Hispanic letters, such as Carlos Fuentes, Julio Cortázar, Pablo Neruda or Luis Buñuel. In Gabo and Mercedes: a farewell (2021), recounts the last moments of one of the most beloved and respected writers in Colombia and the world, Gabriel García Márquez, and his death in 2014. These pages express the relationship of a son with his father, but also with his mother. , in this case, Mercedes Barcha, García Márquez’s companion for more than fifty years who passed away in 2020. In conversation with Juan Gabriel Vásquez, Rodrigo García presents a close look at this iconic couple and also one of the most human faces we have seen of the great genius, the Nobel Prize.

5. 10:00 am to 11:00 am: Authoritarianisms versus democracies – Felipe González, Sergio Ramírez and Juan Manuel Santos with Sandra Borda

The democratic system is not perfect, but its existence guarantees a quality of life and an exercise of freedoms for citizens like no other political system. Felipe González, Spanish lawyer and politician, President of Spain between 1982 and 1996; the Nicaraguan writer Sergio Ramírez, Cervantes Prize 2017; and the Nobel Peace Prize winner and former president of Colombia, Juan Manuel Santos, will talk with Sandra Borda Guzmán about the great challenges of these times, where censorship or authoritarianism seem to gain ground over democracies in some countries of the region.

The artist and thinker ai weiwei (China) studied at the Beijing Film Academy and later, moving to New York, continued his studies at the Parsons School of Design. His largest solo exhibitions have been seen in the world’s leading contemporary art museums. Among the numerous awards and honors he has received are the recognition of his career at the China Contemporary Art Awards in 2008 and his appointment as an honorary academician of the Royal Academy of Arts in London in 2011. His work in the field of human rights She has been recognized with the Václav Havel Award for Creative Dissidence in 2012 and Amnesty International’s Ambassador of Conscience Award in 2015. Ai Weiwei is considered one of the leading cultural figures of her generation and serves as an example for freedom of expression both in China and internationally. He will chat with the journalist and writer Mariana H.

Raúl Zurita (Santiago de Chile, 1950) is one of the most famous poets in Latin America. Arrested in the early hours of September 11, 1973, the day of Augusto Pinochet’s coup d’état, and imprisoned in the hold of a ship, his poetry records the regime’s atrocities and violence committed against the Chilean people. In 1979 he founded, together with other artists, the group Colectivo Acciones de Arte (CADA), which undertook extremely risky public art actions against the dictatorship. In 1982, five planes wrote his poem The new life in the New York sky, and in 1993, using backhoes, he permanently traced the phrase “NI PENA NI MIEDO” in the Atacama desert, which, due to its extension, three kilometers long, can only be seen from above. Zurita has received the Guggenheim and DAAD scholarships from Germany and, among other recognitions, the Chilean National Prize for Literature in 2000, the Pablo Neruda Ibero-American Prize in 2016, and the Queen Sofía Ibero-American Poetry Prize in 2020. He has been a visiting professor and readings at numerous American universities such as Harvard, Yale, Stanford, Tufts or Berkeley. On this occasion he will talk about his work with Piedad Bonnett.

Talk sponsored by Diario Criterio. The Bogotá writer Juan Gabriel Vásquez is the author of a dozen books that are published in more than thirty languages ​​and have made him one of the most widely read Colombian authors in the world. novels like The sound of the things when they fall (2011), which this year celebrates its tenth anniversary with a special edition, or The shape of the ruins (2016) have earned him, among other awards, the Alfaguara Prize, the Gregor von Rezzori-Città di Firenze, the Dublin IMPAC International Literary Prize or the Roger Caillois for his work as a whole. In addition, Vásquez is a translator and his opinion articles appear regularly in The viewer Y The country. In his latest book, look back, winner of the Mario Vargas Llosa Biennial Novel Award 2021, masterfully narrates the life and work of the great Colombian film director Sergio Cabrera. In this colloquium, the author will talk about his prolific work with Irene Vallejo.

Nigerian writer Wole Soyinka is the first African person to win the Nobel Prize for Literature (1986). He is a narrator, poet, and political activist, the author of a prolific body of work that encompasses more than thirty plays, five autobiographical books, more than a dozen books of poetry, novels, and short stories, and at least fourteen books of essays. His most recent book, Chronicles from the country of the happiest people on Earth (2021), is a brilliant analysis of the human condition, going through the spheres of power that run the world, the corruption and perversion that go through them. Dr. Menka teams up with his childhood friend, a prestigious engineer and Yoruba royal aspiring to a position with the United Nations, to solve a chilling mystery: who is running the smuggling of sick body parts into the clinic he runs to carry out dark ritual practices. In conversation with Rosie Boycott.

Jon Lee Anderson (USA) needs no introduction. Journalist from new yorker and great traveler, author of the definitive biography on Ernesto Che Guevara (Che, a revolutionary life), has traveled halfway around the world interviewing leaders, dictators and rebels, narrating shocking events to the world. His most recent book is the collection of chronicles The years of the spiral, chronicles of Latin America (2020), has just published the reissue of The fall of Baghdad and is about to reissue The dictator, the demons and other chronicles. Talk about the region and the Middle East with Catalina Gómez Ángel.

Diario Criterio will broadcast ten talks from the Hay Festival