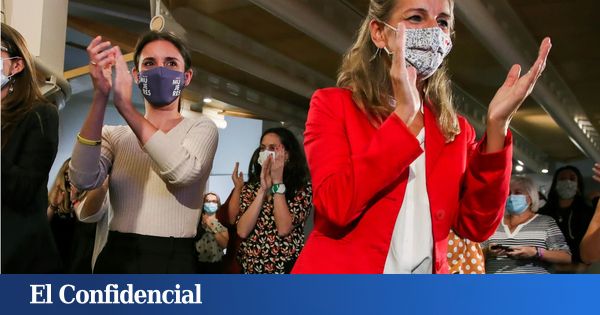 The second vice president of the Government, Yolanda Díaz, has criticized this Friday that some people “with renown” have not understood in the first third of the 21st century that a woman’s vote is worth the same as that of “a man who is a Nobel Prize with all the letters”, in clear reference to the intervention of the writer Mario Vargas Llosa in the national convention of the PP when he said that the most important thing in a democracy was not freedom, but to vote well. “We tell people who have doubts about the right to vote that all women’s votes are good,” he proclaimed to warn of the “dangerous” what those attitudes entail.

This is how he has transferred it after participating in the ‘The feminism of the fourth wave: a new generation of feminist rights‘together with the Minister of Equality, Irene Montero, the head of Women, Gender and Diversity of Argentina, Elizabeth Gómez Alcorta, the mayor of Barcelona, ​​Ada Colau, the secretary of the Podemos Organization, Lilith Verstrynge, and the federal spokesperson for IU, Sira Rego.

Díaz has also underlined his vocation as build a country project “in favor of women”, given that equality is “the most revolutionary thing”, and has claimed that “there is nothing more feminist” than raising the minimum interprofessional wage (SMI), pensions and repealing the labor frameworks that allow precarious jobs, because that is precisely what more affects the female gender.

During her speech, the second vice president has claimed that the current coalition government has a “close look” to improve the lives of the people who suffer from that precariousness and has given as an example the determined action so that domestic workers enjoy the right to unemployment benefit, Well, “there is nothing more unfair” than depriving them of it.

The Minister of Labor also stressed that feminism “must be” taken very seriously “because it allows” broadening freedom “and contributes to a more democratic society,” despite what despite those who they continue to live off hate. “ And that also happens to achieve, among other goals, that precarious women can access a decent home, a right that now, he said, is not being fulfilled.

He has also had words of appreciation for the work of Irene Montero because her Ministry is “doing what has never been done” to promote equality, especially since “there is no more machismo that all the violence he has suffered “for complying with the measures promised in the electoral program.

“Let’s take seriously all the deployment that we have made,” Diaz has exhorted precisely before the cast of leaders of Unidos Podemos gathered. A message of support and recognition that is produced after the commotion of his statements where he pointed out that in his broad front project the parties were not protagonists and warned that if there was noise he would leave.

For her part, Irene Montero has also praised Díaz and has predicted that, as she already did with the rise in the minimum wage, will also be able to repeal those labor reforms that are harmful to women, something that supposes authentic feminist politics. “That is why we all need each other in this political space, which says that feminism is on the transformation agenda,” the Equality head has deepened to also praise the municipal management of Ada Colau.

The mayor of Barcelona has also praised Díaz, whom she has defined as the “best Minister of Labor” and has ruled that it is an “example of feminist leadership”, by demonstrating that it is possible to face all the objectives to advance in rights and freedoms from “dialogue”.

Díaz, on Vargas Llosa: “The vote of a woman is worth the same as that of a distinguished Nobel Prize winner”