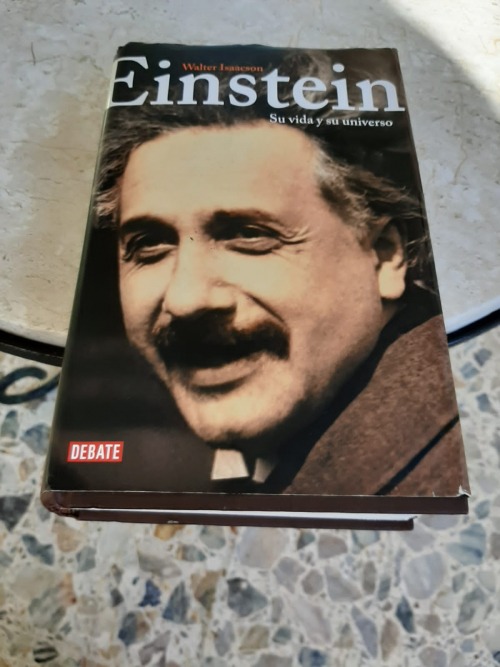 “The theory of special relativity that Einstein developed in 1905 applies only in this special case (hence its name): a situation in which observers move at constant speed relative to each other—more specifically, uniformly, in a straight line and constant speed – , in what is known as an <

“With his theory of special relativity, Einstein had shown that space and time did not exist independently, but instead made up the fabric of space-time together. Now, with his general version of the theory , said structure of space-time ceased to be a mere container of objects and events, far from them, it had its own dynamics, which was determined by – and in turn contributed to determine – the movement of the objects within it; in exactly the same way that the surface of a trampoline will be curved and undulated by a stationary bowling ball and some billiard balls rolling alongside it , in turn , that dynamic curvature and undulation of the trampoline ‘s surface will determine the trajectory of the balls that roll along it and will make the billiard balls go towards the bowling ball

The curved and undulating structure of space-time explained gravity, its equivalence with acceleration, and also – Einstein asserted – the general relativity of all forms of motion. In the opinion of Paul Dirac, Nobel laureate and pioneer of quantum mechanics, that was <

The whole process left Einstein exhausted, but euphoric. His marriage had collapsed and war was raging in Europe, but Einstein was happier than ever. << My wildest dreams have come true - he would exultantly tell Besso -. Overall covariance. Wonderfully accurate Mercury perihelion motion .>> . And he signed << Happy, but defeated >>.

” For nearly three centuries , Isaac Newton ‘s mechanical universe , based on certainty and absolute laws , had been the psychic foundation of enlightenment and social order , with its belief in cause and effect , order , and even But now another view of the universe was emerging , known as relativity , in which space and time depended on frames of reference . This apparent rejection of certainties and abandonment of faith in the absolute seemed vaguely heretical , perhaps even impious, to some people << It shaped like a knife - writes the historian Paul Johnson in his magnificent history of the 20th century, Modern Times - which helped to cut the traditional moorings of society, leaving it adrift.>>

“Theoretical advances in the mid-1920s led by Niels Bohr and his colleagues, including Heisenber, to what became known as the Copenhagen interpretation of quantum mechanics. One can only speak of a property of an object in the context of how that property is observed or measured, and such observations are not simply aspects of a single picture, but are mutually complementary.

” In other words , there is no single underlying reality that is independent of our observations . ” It is wrong to believe that the task of physics is to discover what nature is like , ” he declared . ” Physics is concerned with what we can say about nature . of nature.>>

” This impossibility of knowing a supposed << underlying reality >> meant that there was no strict determinism in the classical sense. << When one wishes to calculate the " future " from the " present " one can only obtain statistical results - said Heisenber - , since it can never discover all the details of the present.>>

“When that revolution reached its apogee, in the spring of 1927, Einstein used the bicentenary of Newton’s death to defend the classical system of mechanics based on causality and certainty. Two decades earlier, Einstein had brought down, with his youthful lightheartedness, many of the pillars of Newton’s universe, including absolute space and time.Now he was a defender of the established order, and of Newton.

“In this new quantum mechanics – he said – , causality seemed to disappear. << but the last word has not yet been said - he affirmed -. May the spirit of Newton's method grant us the ability to restore the union between physical reality and the most profound feature of Newton's teachings: strict causality -->>

” This is how Einstein was awarded the 1921 Nobel Prize , in the words of an official call , << for his services to theoretical physics , and especially for his discovery of the law of the photoelectric effect >>. Both in the call as an unusual caveat was explicitly included in the Academy secretary’s letter officially informing Einstein, Both documents specified that the prize was awarded <

” The official opening speech , from the mouth of Arrhenius , chairman of the committee , had been meticulously worded : ” There is probably no other living physicist whose name has become as widely known as that of Albert Einstein , ” he began . most of the discussion centers on his theory of relativity>> He then went on to state, almost disdainfully, that <

“After briefly mentioning other works by Einstein, Arrhenius explained the position of the Academy about why he had been awarded the prize. << Einstein's photoelectric effect law has been verified by the American Millikan and his students and has passed the It proves brilliantly," he said. "Einstein's law has become the basis of quantitative photochemistry in the same way that Faraday's law is the basis of electrochemistry.>>

“Einstein delivered his official award acceptance speech the following July, at a Swedish scientific congress attended by King Gustaf Adolphus V. He did not speak of the photoelectric effect, but of relativity, and concluded by emphasizing the importance of his new passion, finding a unified field theory that would reconcile general relativity with electromagnetic theory and, if possible, with quantum mechanics.”