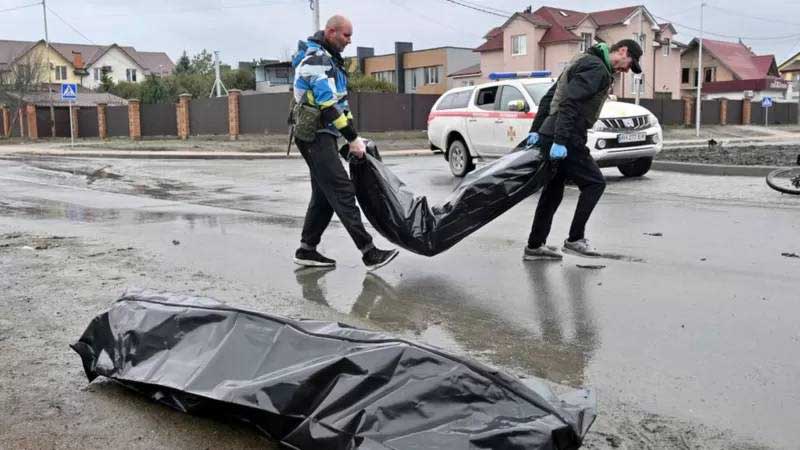 Images of the Bucha massacre occupy international attention. Those bodies piled up in mass graves or scattered along the streets and paths of that Ukrainian city once again call into question the relevance of the war.

Not only because the tragedy of death is present, but also as a consecration of the cynicism of the governments involved that, for propaganda purposes, use the images to accuse the other of having violated all the norms of the law of war.

Nobody knows what happens on the battlefield. Nor what happens in the heads of those who design war propaganda. We Argentines know it perfectly. The exaltation of the courage of the officers of the Argentine army was one of the crudest lies orchestrated by the government of Leopoldo Fortunato Galtieri. Soon such defections were undressed.

Vladimir Putin’s criminal record helps prosecute him and bring his case to the international courts in The Hague. His background and the extermination orders that he issued in the wars in Chechnya and Syria are out there. Will they be the same in Ukraine?

The missiles launched against the railway station in the city of Kramatorsk seem to confirm this. The same can be said of the Ukrainian armed forces. Nobody is naive. The rapes of women, men and children; of the elderly, youth and children are common. It has happened in every war in history. There is, for those interested, an extensive literature on the subject.

Does Zelensky, in his eagerness to denounce the excesses in all the forums that come his way, pave his way to the Nobel Peace Prize?

In his verbal excesses, the Ukrainian president uses everything that serves his purposes and, incidentally, draws almost unanimous applause. Their claim to create an equivalence between Bucha and Gernika is an affront to the Republicans who died in the Spanish Civil War.

He should have, before offending the memory of the martyrs of the heroic Basque city, have explained the vote of his government -together with the United States- where, in the United Nations, he exculpates Nazism, as has been pointed out in this column in a timely manner .

Our conviction that the world is at the gates of a global war is growing by the moment. We do not know how or when it will explode. Questions abound and answers are absent.

The presence of the Russian army in Chernobyl raised all the alarms. The invaders -according to the atomic community- altered the security levels in the reactors installed in the region that was the scene of the most tragic nuclear accident in the history of man. The nations of the Baltic Shield and the Scandinavian Peninsula have high radiation rates.

The war debate has caused a fracture within the European left. While denouncing that the warmongering escalation is advancing throughout the continent, they are not correct in the method when it comes to unifying the discourse or in their modes of action. They announce storms but do not promote substantial measures to counteract the effects of the flood.

The European stubbornness -in the heat of the fighting- suffered alterations. There were changes of propositions. On the one hand, the anti-war movement raises its dissonant voice. On another lane walk those who love war clinging to the idea of ​​structuring a European army – under French command – that, among other issues, limits NATO’s influence in continental politics.

Everything is possible in this context. But… will the member nations of the European Union be willing to finance this new war structure without affecting their Atlantic commitments?

The Catalan Rafael Poch de Feliu, whom we frequent with some regularity, frames the Ukrainian conflict as a continuation of other imperial wars. And there appear the figures of horror. 38 million displaced people and 900 thousand deaths left the military interventions in Iraq, Afghanistan and Yemen. Brown University in the United States estimates the figure at 3.1 million dead, taking into account those who died after the conflict due to the destruction of basic infrastructure and health services.

Massacres of this type are not the exception but the norm. They manifested themselves overwhelmingly in the First World War. More than a million dead were added by both sides in the Battle of the Somme in 1916, which lasted four months and 17 days.

If machine guns had the power to annihilate soldiers in the enemy lines by the thousands, the introduction of tanks, motorized artillery, battleships, aircraft carriers and aerial bombers in World War II raised the scale of slaughter to new dimensions.

The war, then, had two complementary scenarios: the battlefront and the assembly lines. Hitler was defeated by Fordism.

August 6, 1945 was the celebration of barbarism and savagery. The explosion of a bomb caused 80,000 deaths almost instantly and up to 140,000 in the following months. Three days later, another exploded in Nagasaki. This time 70,000 died.

In March, Tokyo was devastated by US planes that unloaded 1,665 tons of napalm until the city was completely burned. The temperature reached more than 900 degrees and some 100,000 people were melted to death by the fire.

On February 13 of that year, joint forces of the Royal Air Force and the US Navy bombed the Open City of Dresden. The allies dropped 4,000 tons of bombs on the city. There were fiery winds of more than six thousand degrees Celsius. On the city walls, as in Hiroshima and Nagasaki, was the shadow of human beings who had evaporated.

They were unnecessary bombardments. Germany and Japan had already been defeated.

If at the beginning of the First World War a discourse was launched that opposed the defense of European civilization to the Russian autocracy to justify an imperialist war. Operation that was resumed in the Second War. The new idea was that of the confrontation between Western democracies against fascism. As it was resolved not only by the Allied powers but also by the bureaucracy of the Social Democratic and Stalinist parties around the world.

In Ukraine, once again, they are fighting against Russian authoritarianism. We have returned to 1914. For weeks the negative traits of Putin’s personality have been accentuated. Are we in the presence of a violent clash between the internationalization of the productive forces and the limits of national states?

Will the eventual defeat of the Russian armies be the triumph of Ukraine or of the entire West? Will the support committee chaired by Joe Biden become an anti-fascist front or will it close its eyes when necessary? Will we see the devil sharpen his horns to face the devil?

NATO, meanwhile, dreams of subjugating the European Union. That is why it advances to achieve greater intervention in the economic and political fields as the most homogeneous way to homogenize the imperialist interests of the United States, which are apparently in decline.

During the period of the neoliberal offensive, the idea of ​​achieving global peace was built on the basis of US hegemony and the disintegration of the USSR. Illusion that continued with the incorporation of China to the world market in a complementary way to the globalization process as a producer of cheap manufactures. And although the wars in the Balkans, Iraq, Afghanistan, Syria, Libya or Yemen showed a different reality, the war still seemed distant.

Will Ukraine be sacrificed on the altar of the new distribution of areas of influence? Who cares?

Emergency notes for the memories of the war in Ukraine