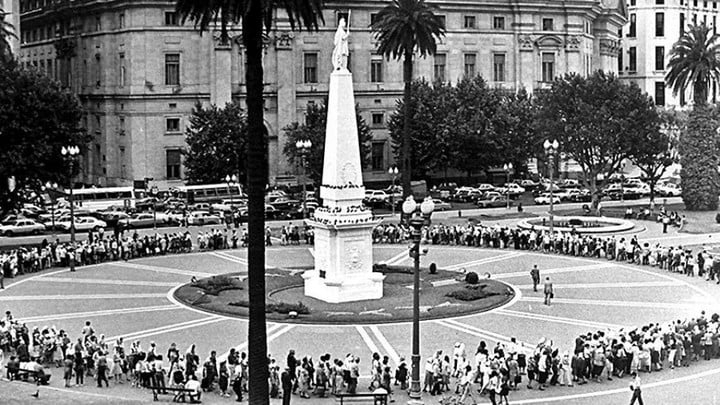 The birth of Hebe de Bonafini and Advertising Day are remembered.

Registered in the civil registry as Hebe María Pastor, Hebe de Bonafini was born on December 4, 1928.who was the founder and leader of the Mothers of Plaza de Mayo Association and passed away on November 20, at the age of 93.

The co-founder of the Mothers of Plaza de Mayo Association He grew up in a low-income household in the Ensenada neighborhood, Buenos Aires province. At the time she married Humberto Alfredo Bonafini, with whom she had her three children: Jorge Omar, Raúl Alfredo and María Alejandra. The only one she is still alive is her youngest daughter, since the two brothers were part of the militants who disappeared during the last military dictatorship.

Ephemeris December 4: The first meeting of the Mothers of Plaza de Mayo was on Saturday, April 20, 1977.

The first meeting of the Mothers of Plaza de Mayo It was Saturday, April 20, 1977, when a handful of women gathered to demand the appearance of the missing persons alive.

Due to their constant struggle, the organization was three-time nominee for the Nobel Peace Prizein addition to receiving countless recognitions, among which the René Sand award, given for the contribution to Human Rights, Justice and Social Welfare and the UNESCO award for “Education for Peace”, among many others.

In 2005 and at the initiative of Néstor Kirchner, the Association undertook to build more than 4,500 homes for the most vulnerable sector of society under the plan “Shared dreams”. However, the homes were never built and an investigation into embezzlement was launched in 2011.

Hebe de Bonafini She was prosecuted by Judge Marcelo Martínez Di Giorgi, considering her “responsible for the crime of fraud due to fraudulent administration to the detriment of the public administration, as a necessary participant.” Likewise, she also had assets of up to 250 million pesos seized.

The case is still open, but the head of the Mothers of Plaza de Mayo died on November 20, 2022 at the Italian Hospital, where she was hospitalized in October of that same year due to different health problems. The news was confirmed by her daughter Alejandra through social networks.

“It is with great pain that we inform you that today at 9:20 a.m. Hebe de Bonafini passed away. We greatly appreciate the demonstrations of love, accompaniment and concern that in these days of hospitalization at the Italian Hospital in the city of La Plata, as throughout his career as a militant, my mother has received,” the statement began.

For his part, he December 4th also commemorates the advertising day, created in homage to the day on which the Advertising Congress was held in Buenos Aires in 1936. The call also established the foundation of the Association of Heads of Propaganda, with the aim of beginning to teach the degree in different universities in the country.

Ephemeris December 4: what happened on a day like today?