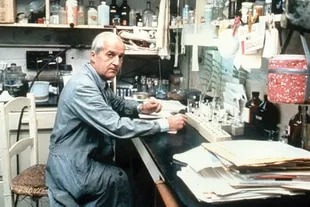 Each corner of the City of Buenos Aires tells the story of the people who passed through it in the hundreds of years that have elapsed since its origin. On Viamonte street at 540 is the apartment of enormous dimensions that belonged to the family of Luis Federico Leloirrenowned Argentine biochemist and pharmacist who received the Nobel Prize in Chemistry in 1970.

The scientist’s family nucleus lived there until a few years ago. The story reveals that It was the doctor’s granddaughter, Sara Leloir, who in recent years inherited the property. Being a cloistered nun, she saw no other option than to donate the apartment to the Church of Paraná, which before the pandemic sold it to the current owners. These are the Argentines Alicia Porcel de Peralta and Raúl Farco, who acquired the apartment to show her work and that of other national and international artists in the space they called “Frente Sur”. Due to an unexpected twist in their plans, today they are putting the apartment up for sale for US$1.5 million.

The rest of the footage is distributed in 11 bedrooms, to which are added six bathrooms, two toilets and two garages. The house is subdivided in such a way that 600 square meters are allocated to the main apartment and the remaining 200 are distributed among three apartments.

The three apartments that are around 70 m² each they were reconverted over time since since the property was inhabited by a large family, its surface was compartmentalized, according to the owner of the real estate agency that markets the apartment, Cecilia Bacello. She also adds that they have the possibility of renting out temporarily and thus being able to use the corresponding income to cover the expense of $110,000 per month for the entire property. When going up the main elevator, the shield has on one side the entrance to the house and on the other a second elevator that leads to these three units.

With an impressive view of the City, the apartment also has a balcony of 50 meters that surrounds the apartment and that means that all rooms have their own exit to the outside. From there you can see one of the most important churches in the City of Buenos Aires, Santa Catalina. In addition, it has a patio measuring 9.5 x 3 meters.

Inside, the windows that give great luminosity to the environments and there is a strong presence of dark-toned wood. Most of the materials in the house are original, such as the floors and fireplaces.

The building was built in 1920 by the architect Eduardo Sauze, also creator of the iconic residential building Estrugamou Palace. It has a professional fit, has a department in each of its six floors and premises shops on the ground floor, such as a cafe and a post office.

location is key. on the sidewalk of in front of the Pacific Galleries, one of the most luxurious commercial promenades in the country where the first international brands are located, the property has within a radius of a few blocks, Luna Park, Plaza de Mayo and the Teatro Colón. Its connection is one of the best in the city, given its proximity to the Retiro station, several subway stations, the metrobus that runs along Alem avenue and 9 de Julio avenue.