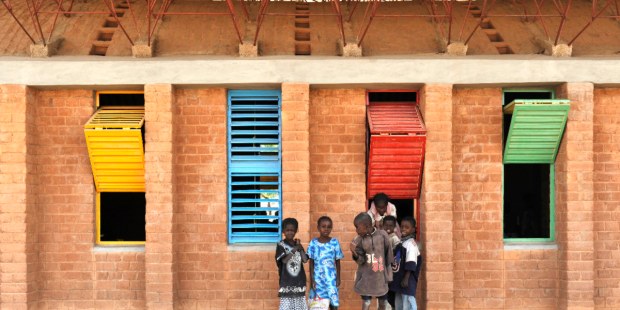 The commitment to its people, social awareness and aesthetics are the hallmarks of the work of the architect from Burkina Faso Diébédo Francis Kéréwho has received the 2022 Pritzker Prize, something like the Nobel Prize for Architecture.

In his native language Diébedó means “the one who came to organize things” and he was the first child in his community to attend school. Years later got a scholarship to study carpentry and moved to Berlin, Germany. There she continued her studies and in 2004 she graduated in Architecture from the Technische Universität Berlin, one of the most prestigious educational centers in Europe.

Apply your education for the benefit of your people

Before finishing his studies in Architecture, Kéré, committed to help their community and give them back their privileged educationcreated a non-profit organization, the Kéré Foundationwith the aim of building projects in his hometown, I win.

In fact, thanks to the funds raised, he built a primary school there in 2001 -without having finished his studies in Architecture.

The Gando’s school it was so successful that the student body increased from 120 to 700 students, for which it had to carry out an extension of the classrooms. In addition, in the same location it has carried out other projects such as housing for teachers (2004) and the library (2019).

This project in his hometown, Gando, laid the foundations for his philosophy: meet an essential need in your community and thus fight against social inequalities.

This is an image gallery of some of his works:

Without a doubt, its architecture is sustainable for the earth and its inhabitantswho sometimes live in conditions of extreme scarcity, with limitations and adversities.

For this reason, use local materials and traditional techniques from his town. For example, the raw material used in Gando’s school was the native clay with which he built brick blocks with the neighbors.

This clay was fortified with cement to form bricks with bioclimatic thermal mass, which retain cooler air inside while allowing heat to escape through the high, cantilevered, wide roof.

So with this ventilation solution air conditioning is not required and light enters the rooms. Kéré himself remembered the heat and shortness of breath that he suffered when he attended school as a child.

Africa in the heart

Kéré’s work is full of symbolism. His education and experiences lived in Gando feed their way of seeing architectureboth in Africa and in other parts of the world.

As he himself explains:

“I grew up in a town where there was no nursery school, but where the whole community was your family. Everyone took care of you and the whole town was your playground. My days were based on securing food and water, but also just being together, talking together, building houses together. I remember the room where my grandmother would sit and tell stories with a little light, while we huddled next to each other and her voice inside the room enveloped us, summoning us to come closer and form a safe place. This was my first sense of architecture.”

meet under a tree

Also the tradition of meeting under a sacred tree to talk, tell stories and celebrate is one of the most recurrent elements in his constructions.

For example, the Sarbalé Ke that he designed for the Coachella Valley Music and Arts Festival (2019, USA) translates to “House of Celebration” in his native language, and refers to the shape of the hollow baobab tree, revered in his homeland.

Also the famous Serpentine Pavilion designed by him in 2017 in London, it takes its central shape from that of a tree and its disconnected but curved walls are made up of triangular modules colored indigo, a color that represents strength in its culture.

Exchange of ideas between Africa and Europe

Ultimately, his work is combination of ideas inspired by their African continentin its tradition, techniques and community work, and reinterprets them giving them a contemporary use that transcends borders and uses modern engineering techniques.

Without a doubt, Kéré always returns to its roots giving a European touch. And he continues to work in Burkina Faso and throughout Africa and also in other places in the world. He both provides facilities and basic infrastructure for small towns with limited budgets and undertakes larger projects.

But always using the beauty that architecture provides. He is architect and servant.

You can listen to a conversation in which he discussed the power of adapting to the future.

Francis Kéré, award for a brilliant architect committed to Africa