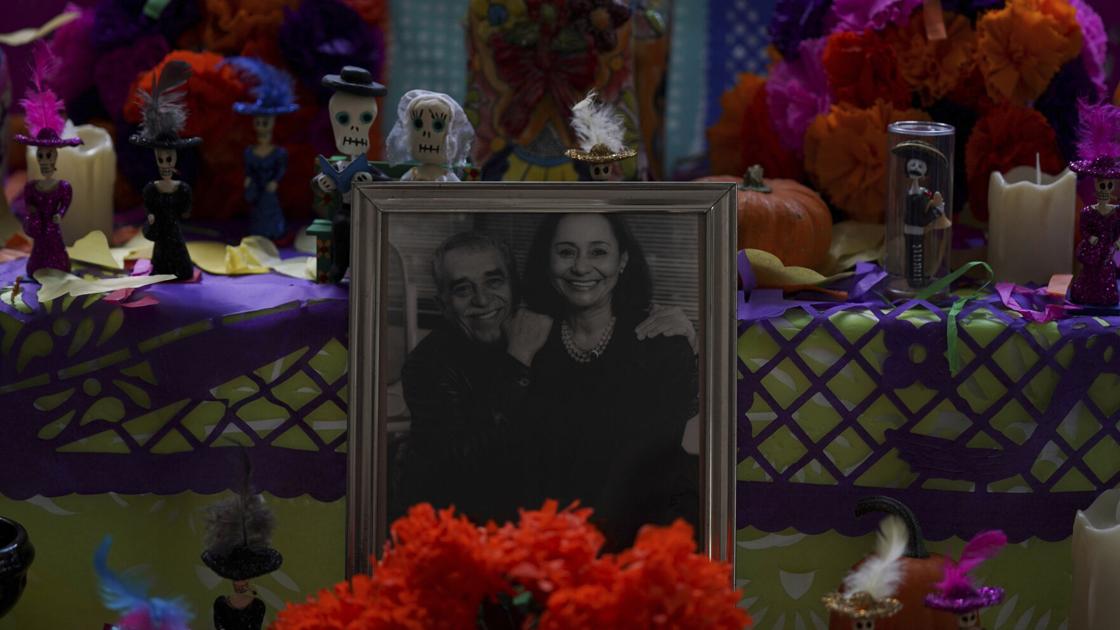 MEXICO CITY (AP) – Since he was a child, Javier Flores lived a few meters from Gabriel García Márquez’s house, in the south of the Mexican capital, but his contacts with the Colombian Nobel Prize for Literature were always sporadic and distant. From this week the relationship will be closer, at least metaphorically.

Flores, a 24-year-old marketer, was one of the blessed few who acquired one of the 400 pieces in the wardrobe of the writer and his wife Mercedes Barcha, who died last year, after the family put them up for sale as part of an initiative of the Fundación Casa de la Literatura Gabriel García Márquez, with the aim of raising funds for indigenous Mexican children.

While subtly stroking a gray and black striped Emporio Armani tie that still retains the smell of men’s lotion and two small stains, Flores claims to feel lucky to have acquired, for an amount equivalent to about 200 dollars, one of the objects that he used the Gabo, as his admirers and loved ones called him.

“It is a very large fortune, because of the access, because of the proximity I have to treasures like this,” said Flores after reporting that the tie is accompanied by what he considered “the greatest coincidence in my entire life”, because after buying it He discovered that it was the same one the writer was wearing when he met him, a decade ago, in a shopping center in Mexico City and they took a photo together.

From the studio where García Márquez gave birth to many of his literary works, Emilia García Elizondo, one of the writer’s granddaughters, attributed the tie event to the magic that always surrounded the father of magical realism. “That’s Gabo, that’s the kind of thing that Gabo does,” he said.

García Elizondo, director of the García Márquez foundation, was in charge for almost four months of the selection process of the hundreds of objects belonging to his grandparents and the assembly of the small shop that was installed in one of the rooms of the elegant house colonial where the writer lived with his wife from the 1980s until his death.

Among the pieces offered there are dresses, blouses, handbags and shoes from Barcha, as well as the characteristic checkered jackets, shirts, ties, belts, shoes and leather boots that García Márquez used to wear, who was very careful with his clothing and fond of European clothing, as he acknowledged in an interview in 1997 with the Colombian newspaper El Espectador: “I am going to Rome for strict matters of my private life, I tell them that I am going to buy boots. And I go to Paris and buy shirts. And I go to London and buy pants, “he declared then.

When talking about the motivations that led the family to sell some of the couple’s objects, García Elizondo affirmed that this initiative seeks to “bring people closer to” a part of García Márquez’s life and “humanize a bit too to Mercedes ”, who was the inseparable companion and muse of the writer.

The income generated by the wardrobe sales would go to the Trust for the Health of the Indigenous Children of Mexico, led by the Mexican actress, producer and activist Ofelia Medina, who told the AP that the donations will be used to provide basic food to hundreds of children. of the displaced indigenous communities of the Highlands of Chiapas, in the south of the country.

The review and selection of the objects of the writer and his wife involved the removal of many memories for his family, said the director of the foundation.

“It was always very cool (good) and pleasant to sit down at lunch with Gabo. He told many stories, he told many jokes, he made us laugh a lot. Mercedes was always a person who had the house in order, the house was very tidy, she had everyone very coordinated so that everything went very well, ”said García Elizondo when talking about the memories that invaded her while she contemplated some of the areas of the study of the writer that still remains as he left it, full of books, music CDs, small sculptures, paintings, photographs of García Márquez and his two sons, and a computer that saved many of the stories of one of the most important Spanish-speaking writers.

In another of the study areas, a colorful altar was installed for García Márquez and his wife with photographs of both, marigold flowers, small skulls, catrinas, candles and food imitations, as part of the Mexican tradition of the Day of the Dead. held annually on November 1 and 2 to remember deceased loved ones.

The nostalgic moment is interrupted by laughter as the 31-year-old granddaughter recounts how her grandfather sometimes jokingly called his grandchildren “infectious donkey dogs.”

“It was always very funny… I would scare you by screaming at the table in the middle of the meal. Mercedes was very angry, “he commented with a smile.

Magical realism was not only present in García Márquez’s literary work, but also in some events that surrounded his life and that of his relatives, García Elizondo indicated when recalling how the day of the writer’s death, April 17, 2014 , “A bird crashed into the glass, which is something he had written in one of his books.”

Yellow butterflies appear in García Márquez’s masterpiece, “One Hundred Years of Solitude”, accompanying Mauricio Babilonia’s character as a symbol of love and loneliness until the day of his death.

The sale began on October 20 and will run until all items listed have been purchased. Those interested can only buy in person and must previously process the appointment through the Instagram account of the House of Literature Gabriel García Márquez.

The writer’s relatives are now working on other ideas and projects that they hope to capture in the coming months at the house number 144 on Fuego Street, so that the residence “has the continuity of the Gabo,” said García Elizondo, who wants to make the place “A space open to people so that they can come and just feel this magic, come to learn, to listen”.

Success! An email has been sent with a link to confirm list signup.

Error! There was an error processing your request.