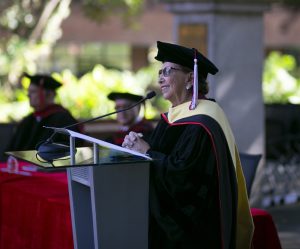 «The training that graduates have received from the Francisco Marroquin University, is unique, because the values ​​that I have seen that are given in this university I have not seen anywhere else. I have not seen the feeling and spirit that exists in this university anywhere else… What one reads in books is a reality here, where they have achieved this center of freedom that we all dream of… How wonderful that this is carried out in Guatemala and that this great light radiates from here. And now the graduates are the guardians of that freedom,” he said. Dora de Ampuerodoctor honoris causa in Political Science, from the Francisco Marroquín University.

These words were pronounced by the doctor from Ampuero during the graduation ceremony which was held on November 5, 2022, in the garden Manuel F. Ayau of the UFM. The commendation of Dora de Ampuero was in charge of Bertha Pantoja, director of Caminos de Libertad.

155 of the total of 237 graduates participated in the graduation ceremony; of these, 34 received their degree with academic distinction. Said distinction was delivered the night before, during a special ceremony, in honor of the distinguished graduates. 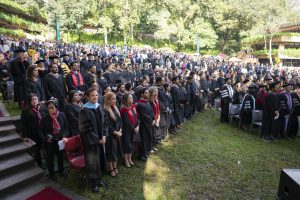 The UFM graduation ceremony is held in the Manuel F. Ayau Garden. Photo by Jorge Silvestre.

Dr. Dora de Ampuero is the founder and president of the Ecuadorian Institute of Political Economy (IEEP), a think tank dedicated to the analysis of public policies and the advancement of freedom in Ecuador. Her work as an academic and activist was crucial to achieve important changes in economic policy in Ecuador, such as the dollarization process that would be essential for the exit from one of the most serious banking crises in the history of the South American country. As part of the IEEP, Dora de Ampuero has collaborated in the training and continuing education of more than a generation of people committed to the cause of freedom. 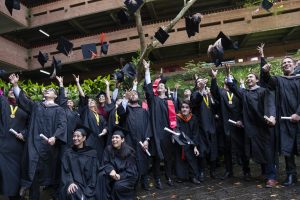 Graduates celebrate their success in the Central Garden of the Academic Building. Photo by Jorge Silvestre.

Academically, Dora de Ampuero passed the courses leading to a PhD in Economics at George Mason University, where she also obtained an MA in Economics. In this study center she was a student of the Nobel Prize winner in economics in 1986, James M. Buchanan, and she specialized in economics from the Austrian school and public choice. He also has a BA in Sociology from Shorter College of Georgia, and an Economics degree from the University of Guayaquil.

Dora de Ampuero accompanied by directors of the UFM. Photo by Jorge Silvestre.

The honoree has been awarded numerous recognitions throughout her career, including: A Life for Freedom 2017, awarded by Caminos de la Libertad; the National Order of Merit, in the degree of Commander, granted by President Guillermo Lasso, in November 2021; the Nôus Trajectory of Life award, for his contribution to education, culture and society, conferred by the Fidal Foundation, in September 2022. He has been a member of the Mont Pelerin Society since 2000, and was part of the Board of Directors of said organization.

Graduation is celebrated with family and friends. Photos by Jorge Silvestre.

The mission of the Francisco Marroquín University is the teaching and dissemination of the ethical, legal and economic principles of a society of free and responsible people.