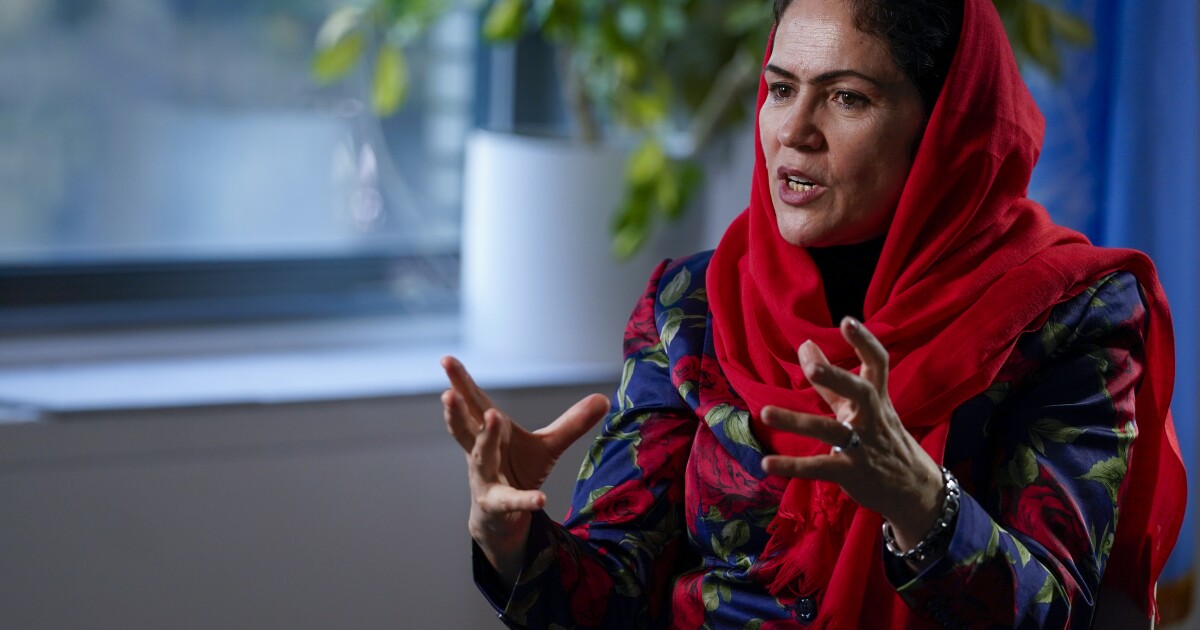 Two months after the Taliban seized power in Afghanistan, one of the country’s most prominent women, a former parliamentarian, presidential candidate and nominee for the Nobel Peace Prize, visits the United Nations, not as a representative of her government, but as an exile.

In an interview with the Associated Press, Fawzia Koofi called for humanitarian aid for Afghanistan to be conditional on women participating in its distribution and allowing Afghans to freely enter and leave the country.

Aid “should not be politicized,” he said. “Women should participate in all stages (of its distribution) and be heard. Women cannot just be “recipients” of assistance, insisted Koofi, who is part of a delegation of Afghan women visiting the UN to urge member states to fight for inclusion and equal rights in Afghanistan.

Since escaping Kabul in August, Koofi has been living in hotels in Europe. She described how much it pains her to have had to leave her country, the reversal of two decades of progress, and the search for permanent residence for herself and her two daughters.

“This is not the Afghanistan we are fighting for,” he told the AP. “The Afghanistan that I wanted was one in which women did not suffer what I suffered during my childhood and adolescence, when the Taliban took power.”

“I wanted other girls to at least enjoy the freedom to choose which school they want to go to. But now they are limited to choosing which room in their house they want to spend the day in. It is something atrocious ”.

Koofi was a vice president of parliament and one of only four women who participated in power-sharing talks with the Taliban, which failed. It says the Taliban’s commitment changed after a peace accord with the United States was signed in February 2020.

“When they signed the agreement, they became much more extreme, they just wanted to buy time and preferred a military strategy,” he said.

Taliban fighters resorted to that strategy over the summer, taking province after province, until reaching Kabul in August. When President Ashraf Ghani fled, the Taliban entered the capital, causing panic among his opponents, who feared for their lives and futures.

The Taliban’s victory dealt a mortal blow to hopes for a political settlement that would preserve the advancement of women in the fields of education, work and the legal system, according to Koofi.

Koofi questioned “world leaders,” in an apparent allusion to US President Joe Biden. “As a superpower, the United States has a great responsibility and should be held accountable,” he said.

When he announced the withdrawal of US forces, Biden said that he must meet the deadlines agreed by the Donald Trump administration and that the United States could not extend its presence in Afghanistan and expect other results.

Koofi, however, believes that the breakdown of the peace talks and the Taliban’s seizure of power could have been prevented. Through tears, she said that “we deal with this trauma every day.”

Her former colleagues in parliament, women who became judges and convicted people affiliated with the Taliban, as well as some journalists who spoke out against that organization are now scared, she said.

He added that the Taliban must also fulfill its commitment to allow women to study and work “within the framework of the principles of Islam.”

Every day Koofi receives hundreds of text and voice messages, mostly from women who are still in Afghanistan and who hope she can help them.

“They are furious … because I am not with them in these difficult moments,” he said. “They keep sending me messages expressing their discomfort. They tell me, ‘we need you here, with us on the streets of Kabul.’ And they are right ”.

Women who worked with her and who supported their families send her photos of themselves as a reminder.

“On a psychological level, processing this, adjusting and accepting it has not been easy,” Koofi said. “Not for me or for all the women and men I have seen in the last two months, since I left Kabul.”

For now, Koofi is focused on finding a residence for herself and her two daughters, ages 22 and 23. For security reasons, he refrained from saying where.

Some 100,000 Afghans left the country after the return of the Taliban. Many more tried but were unable to board planes in the chaotic days that followed the fall of the government. The 38 million Afghans who remain in the country will face “universal poverty” within a year, according to a report by the UN development agency.

Koofi warned about the danger posed by the Islamic State organization in Afghanistan and called for new political negotiations. He said that stability is not the product of a cessation of violence exclusively, but that strong and inclusive institutions must be created.

“If we think that an extremist group like the Taliban is going to defeat Daesh, we are wrong,” Koofi said, using the term IS is known.

“You have to give participation to the nation, to the people, educate them, support the political process.”

He fought for the rights of Afghan women, he had to go into exile