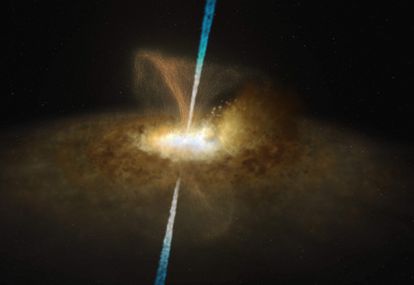 As if it were a joke, a German, an Austrian and a Soviet (today we would say it was Russian), all Nobel Prize winners, give us the keys to how it affects our planet. the formation of black holes.

We start with the Soviet: Pavel Cherenkov (or Cerenkov or Čerenkov). Member of the Communist Party of the Soviet Union, Stalin Prize winner twice, Nobel Prize winner, a machine. Cherenkov was a physicist born in the early 20th century who gave his name to a type of radiation and that, hold on males, has to do with particles that exceed the speed of light. At the cost of doing a little spoilers From my own article, I will say that this does not contradict what another member of the group of scientists that we are discussing today postulated.

Indeed, the speed of light in a vacuum, the well-known (or should be) 300,000 kilometers per second, cannot be exceeded according to our most advanced physical theories. But the devil is in the details, and the speed of light is not the same in a vacuum as when it passes through a medium, which is something that has a certain composition.

For example, light is 25% slower in water, 33% slower in glass and 60% slower in a diamond, perhaps that is why its brilliance blinds us (metaphorically and not physically speaking)! And although light “gets tired” when passing through some media, some particles have more endurance and can be faster than light in that medium, all without contradicting the Theory of Relativity which states that nothing can be accelerated to the speed of light!in the void! (the circumstantial complements of place matter in physics).

Well, when a black hole is created, a tremendously energetic and sudden event (it can be in less than a second in certain ways to form a black hole, there isn’t just one), tremendously energetic photons are emitted, the gamma rays that told us Eve. Those gamma raysupon reaching our atmosphere, collide with molecules and atoms, accelerating them to speeds… greater than the speed of light in air.

And the result is a kind of electromagnetic shock wave, like that of supersonic planes (those are sound), which has the so-called Cherenkov radiation, a bluish light that can be detected by Cherenkov telescopes on the Earth’s surface, as a visible effect. Some of these, very beautiful and large, can be seen on La Palma, where the Cherenkov telescope array biggest in the world. The Soviet physicist discovered this effect by seeing what happened in a bottle of water when it was bombarded by radioactive material, and this bluish light is also very typical of pools of water in nuclear reactors. So the first effect of black hole formation may be a nice shower of blue light and accelerated particles in the upper atmosphere.

Moving on to the second effect, and returning to the protagonists of our joke, we have to talk about Nobel Wolfgang Pauli, famous for telling us that no two electrons are the same. And, not so famous but still curious, that he was known for “physical awareness” and died in room 137 of a hospital, which is a “mystical” number in physics, an adjective that was also said of him. Thanks to Pauli we know of something else that we would feel on Earth, or are feeling all the time, because some calculations indicate that a black hole is formed every second, but that’s another story (like four divergent stories in this paragraph so far).

In 1930 Pauli said that when a neutron emits an electron and becomes a proton, something that happens in less than 15 minutes for half of the lone neutrons in the world (thank goodness that the ones we care about are accompanied and are much more stable), very good , charge is conserved: neutral for the neutron (what a surprise), positive for the proton and negative, and the same as the previous one and, look what coincidencefor the electron.

But we physicists like the phrase “the chickens that go in the chickens that go out” and we apply it to everything, so Pauli said that you should also conserve something called momentum, something called spin and something called Energy. And, saving us the cumbersome details, at least for today, if a neutron releases only one proton and one electron disintegrates, it doesn’t allow it to keep those 4 things. And Pauli said: “There must be a hitherto unknown particle, more chickens must come out when a neutron disintegrates.” And the particle was made (it was discovered in 1956) and it was called neutrino (antineutrino in our example)and Pauli saw that it was good (he died in 1958).

In the formation of black holes from very massive starsas can be the case of Rigel (visible now for much of the night), the first and last thing to escape from the tidal wave that forms before everything collapses they are neutrinos. And those neutrinos are free like the Sun at dawn, they reach Earth and pass through us, although the most energetic ones can be stopped and detected thanks to Cherenkov light, blue light created by its faster-than-light movement in the middle, in this case, water.

In the formation of black holes from very massive stars, what escapes from the tidal wave before collapsing are neutrinos. Neutrinos that reach Earth and pass through us, the most energetic can be detected… thanks to Cherenkov’s blue light, in water!

And we end for him German, Albert Einstein, which had already appeared in our story today and in which one it does not appear! Have you ever felt like everything stopped around you, only to have a chill along with a let vou? Well, it would not be due to a black hole because although in its formation they can be created gravitational waves, which disturb spacetime making a meter and a second shorter and longer cyclically (during the passage of the pulse or “quantum” of the wave), the truth is that its effect on matter is very small.

If the gravitational waves that we have detected when merging 2 neutron stars either 2 black holes produce (measurable!) changes in space so that what was previously 4 kilometers long changes by one ten-thousandth of the size of a proton (and, to be more specific, 4 kilometers would be 4 trillion protons placed side by side). On the other hand, those that would be generated in the formation of a stellar black hole in the central zone of our galaxywhere there is no month that a star does not die, would be at least a Magnitude order less intense, too (little) for our current detectors.

Neutrinos, gravitational waves and, above all, as always, it is the photons that we perceive the most right now every time a (stellar) black hole is formed at some point in the universe. Well, we could perceive these particles when the signal reaches Earth and if we had the appropriate telescopes and detectors for the 3 types of particles (we have identified a gravitational wave with a particle, the graviton, in this last sentence, the thing is not direct nor does it concern us today).

The further away it is, the less energy reaches us from that event, the closest stellar (and lone) black hole must have occurred at about 5,000 light years away, it is not known when. But something (subtle) is felt in the soul on our planet when a star leaves a black hole behind. We were told by a Soviet, an Austrian and a German, and they involve particles no (almost?) mass but real.

How does the formation of a black hole affect us on Earth? Three great physicists reveal what could happen to our galaxy