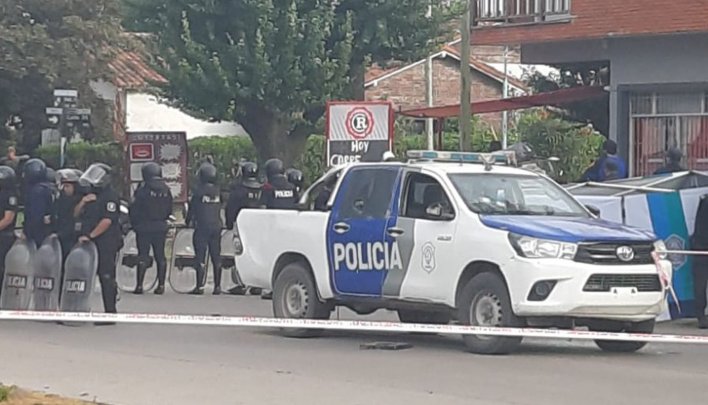 With the signature of Pérez Esquivel, the note was presented to the Governor of Buenos Aires by the internal police movement, in the Bonaerense, without taking into account the accusations that weigh on many of those protected by the police institution that depends on Sergio Berni.

The official disposition orders that when a police officer is suspected, his transfer to another dependency where the community is unaware of his potential danger is resolved. They cite the case of the murder in a Laprida police station of the young Daiana Abregú, where suspected policemen were transferred to Tres Arroyos.

The Permanent Assembly for Human Rights (APDH) and the Provincial Commission for Memory presented today a joint letter to Governor Axel Kicillof, signed by the highest authorities of both entities, among which is the Nobel Peace Prize winner Adolfo Pérez Esquivel , demanding that the Police led by the Buenos Aires Security Minister, Sergio Berni, cease an old and reprehensible practice that consists of transferring suspected policemen to another unit where the community is unaware of this situation.

«We are pleased to write to you with the purpose of conveying our deep concern about the continuous development of a practice that contravenes the proper function of the security forces and generates deep social distrust towards them. We refer to the transfers of police officers from a department in which they have had a suspected criminal act to another department in which this circumstance is often unknown.«, they explained through a letterhead document that bears the signature of Guillermo Torremare, Eduardo Tavani and Soledad Astudillo, presidents and president of the APDH, and by the Provincial Commission for Memory, with its secretary, Roberto Cipriano García, its president, Dora Barrancos , and its president, Adolfo Pérez Esquivel, Nobel Peace Prize winner.

The letter, prepared on July 20 but presented today after the collection of all the signatures, adds that this questionable practice of transferring questioned policemen “is common and goes back in time” and “is unacceptable because the validation of behaviors matters.” suspected, by members of the force that must ensure, precisely, the prevention of crime.

“To this is added the logical social distrust generated in an alerted community, the arrival of those troops who are presumed to have been part of illegal actions, distrust that conspires against any public policy of consolidating democratic security through the one we aspire to”, they continued in the text that claims the governor about this situation.

In the same sense, they exemplified with a very recent case, that of Commissioner Inspector Marcelo Amaya, who worked as head of the Communal Police in Laprida, and Commissioner Cristian Barrios, head of the Communal Police Station in the same city, where the Last June 5, Daiana Abregú died. For human rights organizations, both “turn out to be -at least- functionally responsible for his death, as heads respectively, of the force that was in charge of his apprehension and custody and of the unit where this very serious event took place, far from having been preventively removed from their positions, they were transferred to perform functions in the city of Tres Arroyos.

“The persistence of the mechanism that we criticize violates the organic police law – No. 13,482- whose spirit encourages the security forces to be absolutely respectful of human rights, which is a tributary of the constitutional mandates both in the Nation and in the Province”, they concluded, not without first asking the governor to “have the regulatory measures necessary to prevent the practice denounced here.

The APDH is a national entity that promotes human rights, created in 1975, which has twelve regional offices in the province of Buenos Aires, while the Provincial Commission for Memory is an autonomous and autonomous public provincial body created in 1999 with the aim of to promote public human rights policies and act as a Local Mechanism for the Prevention of Torture in accordance with National Law 26,827.