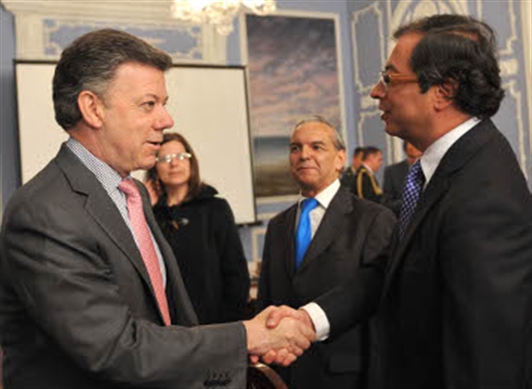 Tweet
Share
Share
Pin
Once he won the Presidency of the Republic, on June 19, the leader of the Historical Pact assured that one of his main bets is to resume the path of peace left by Juan Manuel Santos. He has also stated that he wishes to resume negotiations with the ELN, the second largest guerrilla group in the country, interrupted after the arrival of Iván Duque to power. Photo: Presidency of the Republic

Although he does not appear much in the media, the former president of Colombia Juan Manuel Santos gave an interview to the Brazilian media Folha de São Paulo in which he spoke about various aspects of Colombian politics.

Among the issues touched by the former president are their expectations regarding the government of Gustavo Petro, which will begin on August 7, and on the fight against drugs that is being carried out in the region.

Initially, Santos assured that he supports the intentions of the president-elect on the full implementation of the Final Peace Agreement that the Colombian State signed in 2016 with the former FARC guerrilla, and was promoted during the two governments of Juan Manuel Santos (2010 -2018 ).

“I support 100% the new president of Colombia in his determination to implement the peace process and have the Special Justice for Peace as a model for the pacification of the country,” Santos said in the interview with the Brazilian media.

On Friday, October 7, 2016, the Norwegian Nobel Committee awarded Juan Manuel Santos, president of Colombia at the time, the Nobel Peace Prize, after signing the agreement that ended the oldest guerrilla on the continent.

It may interest you: The “tasks” that Gustavo Petro set for the new Minister of Education

The Norwegian Nobel Committee decided to award the Nobel Peace Prize to Colombian President Juan Manuel Santos for their determined efforts to put an end to the more than 50 years of civil war in the country, a war that has cost the lives of at least 220,000 Colombians and displaced nearly six million people,” explained the institution’s coordinator, Kaci Kullman Five, back then.

Once he won the Presidency of the Republic, on June 19, the leader of the Historical Pact assured that one of its main bets is to return to the path of peace traced by Juan Manuel Santos. He also stated that he wishes to resume negotiations with the ELN, the second largest guerrilla group in the country, interrupted after the arrival of Iván Duque to power.

“If someone opposes the agreements, I know that he will be there at the forefront, the Agrarian Reform is one of the first issues of the Peace Agreement,” said former President Santos.

Regarding drug trafficking, the former national president stressed that, “The fight that has been taking place to end these mafias has been of no use.” and confirmed that together with former Brazilian president Fernando Henrique Cardoso are running a worldwide campaign to end the prohibition of the marketing of drugs.

It may interest you: “It is incorruptible”: José Lafaurie threw flowers at Gustavo Petro’s Minister of Agriculture, Cecilia López

“I worked to destroy coca crops with chemicals that are destructive to nature and to man, I made drug arrests, I extradited more than 1,400 drug traffickers, and yet the drug trafficking business continued and continues, even bigger than before. Santos said in the interview.

And he continued his intervention saying: “What did that teach me? That these solutions do not weaken the mafias. And that the solution is the legalization of drugs”, he added.

In his talk with the Sao Pablo newspaper, Santos recalled when he proposed the legalization of drugs in Colombia. “They said he wanted to poison the children. But that’s what the United States did when it legalized alcohol. it’s possible”, he finished.

“If someone opposes the agreements, I know he will be there at the forefront,” said Juan Manuel Santos about the role of Gustavo Petro