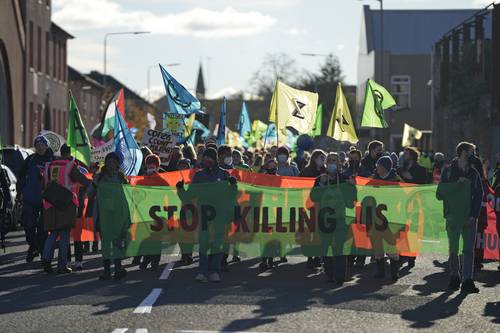 Glasgow. María Reyes is a 19-year-old Mexican girl who lives in a small town in Puebla, near Coronango, from where she decided some time ago to rebel, to be outraged by what is happening on the planet. Thus, she became a very incisive activist, who raises the cause of the endemic lack of water in Mexico as well as the poor state of the oceans or concern about the deterioration of air quality. He is now in Glasgow, having sailed together with four other young people from other continents, in the Rainbow warrior Greenpeace, the most famous ship of the environmental organization.

The young activist, who is part of the international platform Friday for the Future (Friday for the Future), to which the Swedish Greta Thunberg also belongs, came to the COP26 headquarters to raise her voice, to shout in the streets and also to demand that neither the youth nor those most affected by climate change “are listening, the politicians of the day and the big businessmen of the polluting companies are making the decisions of our future ”.

Reyes went through a true viacrusis before reaching Glasgow, so he wants to make the most of his presence. When the possibility of going to the Scottish capital arose and he saw the requirements, he knew it would not be easy: the first stumbling block was the vaccine. María, who is from a peasant town in Puebla and in which people even older than her have not yet been vaccinated, decided to take action on the matter and travel to Tijuana and from there to Los Angeles to “get a kick of the Johnson ”. From there he began to look for a way to pay for the trip, hotels and transfers.

Once all that was resolved, he first traveled to Sweden, for a UNICEF campaign, and then to London, where he joined a protest against a financial institution, Standard Bank. From there, finally, he traveled to Liverpool, where he first boarded a small Greenpeace launch that would take them to the Rainbow warrior, the mythical boat with which the most important protests of the organization have been made and which is itself a symbol.

There she met her fellow protestors, other young women from Bangladesh, Namibia and Uganda, whose names are Edwin Namakanga, Farzana Faruk Jhumu and Jakapita Kandanga.

During the trip, they spoke about their campaign, about what most outrages them in the way COP26 is being handled and in the lack of information about the negotiations. Despite the fact that his intention was to reach Glasgow and navigate the River Clyde, which can be seen from the COP26 headquarters, it was not possible. The police blocked their way and they were forced to disembark in a remote area of ​​the city.

“Still we are going to make ourselves heard. These days and now with the demonstrations, because we cannot stop denouncing that this climate crisis is exacerbating inequalities, ”he explained. “But above all, we are not going to allow our future to continue being negotiated in private offices, and they will listen to us. We do not understand why they cannot have the people most affected by the climate crisis in the negotiations. It is impossible that something good will come out if things are done like that, “he said.

For her part, Greta Thunberg called COP26 a “failure” and said that significant action to stop the climate crisis will come only from “massive pressure from abroad,” she said yesterday in a group chaired by actress Emma Watson, through the daily The New York Times, on its NYT Climate Hub platform, in Glasgow. He added that “the change will not come from those conferences (from COP26). Without massive pressure they will continue to leave without doing anything and continue with their blah, blah, blah, without taking responsibility, “said the Swedish activist.

The event also had as a guest hours before the Nobel Peace Prize winner Malala Yousafzai, who stated that in 2021 4 million girls were at risk of losing their education due to climatic disasters and warned that this figure could increase to 12.5 million in the next five years.