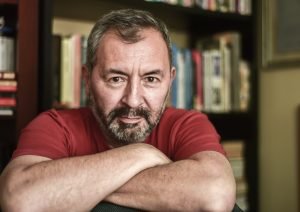 Marcelo Simonetti is one of the most relevant figures in recent Chilean narrative. In 2005 he was awarded, with “Borges’s betrayal”, the significant Casa América Award that launched him to world stardom. The reissue of “Borges’s betrayal” (Ediciones de La Lumbre, 2022) allowed him to talk with Diario Talca and deepen his profession as a writer.

Among the novels by Marcelo Simonetti Ugarte (Marcelo Simonetti, Valparaíso, 1966) we highlight Hiroshima drawing (2020) and Madame Czechowska’s Fan (2002). Simonetti recalled on some occasion: «When I was a boy, in Valparaíso, I would rather run after a ball than open a book. And there was a teacher who told me that there were two types of readers, some who read to escape from the world they live in, and others who do it to find the worlds to which they belong. And that phrase seemed very powerful to me ».

Marcelo, what balance do you make of your reading of “La Traición de Borges”, published in 2005?

«The novel received the VI Casa de América Award for Innovative Narrative given by Casa de América (Madrid) and Editorial Lengua de Trapo. Winning this prize was very important, because nearly 300 novels from different parts of the world participated and the jury included outstanding writers such as the Colombian Héctor Abad Faciolince, author of The oblivion that we will be, and the Spanish writer Belén Gopegui. The newspaper El País, of Spain, in its literary supplement babelia, made a glowing review and the novel circulated well in that country. It was an important accolade for a writer who until then only had one book —Madame Czechowska’s fan— and in this sense it prompted me to persist in an uncertain profession such as writing. The only low point was the poor circulation that the novel had in Chile. Very few copies arrived and, being an imported book, it was prohibitively expensive. The latter was one of the reasons that pushed me to try to give ‘La traición de Borges’ a second life”.

What made its reissue possible?

“In practice, having won the Book and Reading Fund that allowed us to provide resources for the reissue of this book. To this we must add the confidence in the project on the part of Ediciones de la Lumbre that embarked on this adventure and opted to give the novel a second wind ».

Do you share that it is a very personal novel where some of your own literary obsessions appear?

«I believe that all novels, regardless of whether they are inspired by their own experiences or not, are built from the author’s literary obsessions. In this case, those obsessions are given by metaliterature, and on this level, without a doubt, Borges is one of my obsessions —it was even more so at that time. Beyond his work, everything he contributed to the short story genre, Borges’ life is full of paradoxes, such as being appointed director of the National Library when he had lost a very high percentage of vision of the. A blind man in charge of thousands of books! Or everything that was said regarding the reasons that the Swedish academy had for not awarding him the Nobel Prize. Or how a home accident —he hit his head— coincided with the start of his work as a storyteller —until before that accident, he had mostly written poems. And perhaps I should say the same about Diego Armando Maradona, a character who is the antipodes of Borges, and although he does not appear as a character in the novel, everything he generated from his participation in Mexico 86 is described. In addition, he also has a life story that does not finish impressing me. If someone wants to talk about a story of overcoming, well, there is the life of Maradona, with all the chiaroscuro of him ».

How did you reach that closeness with Borges?

«I don’t know if the proper term is closeness, but I did do a lot of research; I read several books of interviews and biographies, in order to be able to refer to situations and events in his life that the false Borges would later make his own. I soaked up the life of Borges as an actor could have done to be able to transfer those experiences to the false Borges ».

From the wonderful world of Borges, what impacted you the most?

«Commitment to Literature. The fact of living for her and with her. She refounded the story and installed a style that transcends the genres of literature themselves. We all understand what is meant when talking about the Borgean. And although she once wrote a verse that says ‘a woman hurts all over my body’, she shunned emotionality in her stories. She put her intellect at the service of her narrative ».

Somehow Borges makes clear the close link between the literary world of the writer and literature. Have you lived the experience in his own work as a writer?

«Metaliterature as a genre is something that attracts me. Right now I’m working on a novel that talks about how to write a novel».

Borges, when did you definitely lose your vision?

«Borges wrote the story El sur in 1953. That is the last story he wrote in his own handwriting. Two years later, when he takes over as director of the National Library, he is almost completely blind, the only thing he recognizes is the color yellow. He was then 56 years old. That is to say, he lived blind for 29 years ».

And how did you do it to continue living in the world of letters?

“I understand that after El Sur what he did was dictate his stories.”

In the middle of writing the book, what could you have learned about Borges’ relationship with Chile?

«The most famous episode is the visit to Chile in the 1970s, specifically in September 1976. He traveled in order to receive an honorary doctorate from the Catholic University, which was conferred on him by Pinochet himself. Not happy with this Borges gave a very controversial speech in which he defended the dictatorship. This episode would have been key in the fact that the Swedish academy refused to give her the Nobel Prize, even though she had merits to spare ».

Marcelo, I understand that reading Borges was relevant to your training as a writer, in what sense did it mark you?

«I was seduced by his style, the literary tricks, his imagery. It’s moreBorges’s betrayal drinks from what was the last story that Borges wrote: Shakespeare’s memory. In it, a merchant offers a character very similar to Borges the memory of the English playwright, and when I write this I am not talking about a document, but rather his own memory, his memories, his imaginary. This game is very similar to the one experienced by Julio Armando Borges, the false Borges, in the novel».

Marcelo, 2022 has been prolific in his literary creation. At what point is he?

«This year has been particularly productive in terms of publications. Apart from the reissue of Borges’s betrayal, A few months ago I published a novel that has a more political reading than previous stories of mine. That novel is called Redman and someone has said that it is a social novel that shows the many Chiles that live together today with a focus on the traumas inherited from the dictatorship. I also published a beautiful book for boys and girls called Walker and that tells a universal story, that of migrant children who walk between one country and another. And in addition to the above, I was part of an anthology articulated by Paola Passig and Ximena Ceardi entitled The children of ’73 which collects the testimony of 18 authors who offer their views on the Coup from what they lived, or lived, when we were children. Also, a group of students from my historical workshop, with whom we have been working for several years, compiled several of their stories in a book that I prefaced and called Everything counts. I like this diversity and the particular character of each of these projects. At what point am I? It’s hard to say. Perhaps the best answer is a no-brainer: at a very productive time.”

His biography on Pedro Lemebel, which he is writing with Jovana Skarmeta, is highly anticipated. At what stage is the edition?

«The biography must be delivered at the end of November. And the plan is for it to be published in the first half of 2023. We have conducted more than 60 interviews and I think a fascinating character has been revealed to us, very different from the caricature that usually accompanies the figure of Pedro, a lucid and brave being, who read Chile like no one else had and whose legacy I think we still don’t fully understand. We hope this biography helps to better understand who he was and the importance of his work.

You are concerned with stimulating reading among children and young people. What is the literary gym and the experience called LeoLover?

«LeoLover is a reading promotion project aimed at adolescents. These are small audiovisual capsules that anyone can see on the page www.leolover.cl. We want to spread our passion for books to boys and girls, so that they discover that wonderful world that is reading, that they learn to enjoy it and that they turn it into a daily exercise from now on. I take advantage of inviting you to follow us on Instagram in the profile @comunidadleolover. The literary gym is a different instance and is aimed at those who want to write: it seeks to develop writing muscles from work in situ; the muscle of description, that of first-person narration, that of building atmospheres and so on».

Do you think that reading is in crisis?

«I think that this is a thesis that has been installed but that does not correspond to reality. The pandemic taught us how important books are, how much we need them, how good they do us. It is true that social networks have accustomed us to reading in short formats, and sometimes very short ones, but not even the most entertaining of posts or Twitter threads can ever replace the pleasure that a good novel or a good storybook provides. ».

Decisive readings and writing, can they help to turn life around?

“It is clear that literature is not going to change the world, but it can make significant changes in someone who embraces reading or writing as a daily exercise.”

INTERVIEW: “The pandemic taught us how important books are”

The Nobel Prize for Literature, a distant relationship
"Do not panic about inflation in the United States"
The UAL recognizes the work of 3 students against gender violence
Tweet
Share
Share
Pin