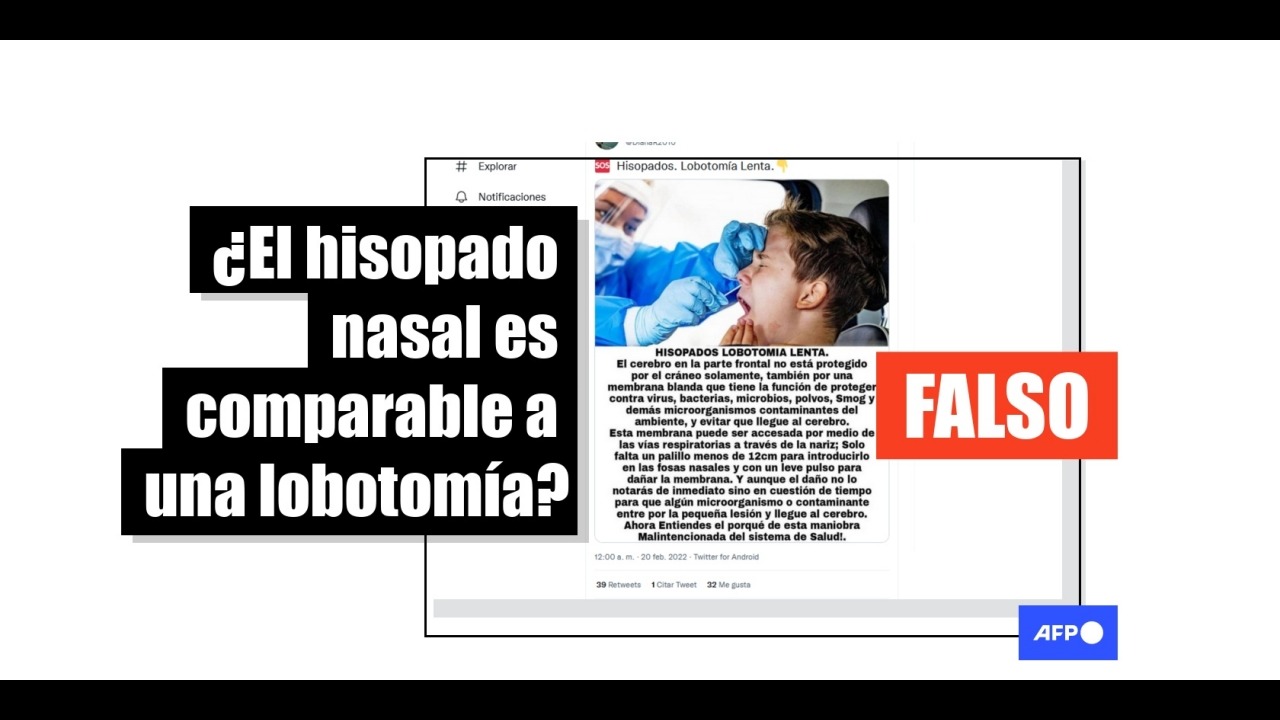 In a meme shared hundreds of times on social networks since mid-January 2022, it is stated that nasal swabs, used during the pandemic to identify covid-19 infection, are the equivalent of a “slow lobotomy”, since they leave a permanent and deliberate injury to the blood-brain barrier. But the statement is false. The lobotomy was a surgical procedure, already discarded by current medicine, in which brain connections were sected, something impossible to do through the nose and with a swab.

According to the viral meme, circulating in Facebook and Twitterthe swab rod damages the membrane that protects the brain, allowing microorganisms or contaminants “enter for the small injury”. It is affirmed, in addition, that the procedure is a “Malinteed work of the health system”.

The membrane to which the viral publication is the blood brain barrier: A network of blood vessels and fabric whose purpose is to prevent harmful substances from penetrating the brain.

What is a lobotomy?

The lobotomy It was a practice of psychiatric medicine whose purpose was to alleviate the symptoms of mental disorders such as schizophrenia, severe depression or compulsive obsessive disorder. Its inventor, Egas Moniz, won The Nobel Medicine Prize in 1949 for developing the procedure, which consisted of cutting the connections that the frontal lobes have with the rest of the brain.

“The technique arose from the observation that ablation of the chimpanzee’s frontal lobe improved behavior”he said to AFP factual latin facundo, researcher at the Execution Unit for Studies in Neurosciences and Complex Systems of Conicet, Argentina. The specialist explained that the development of the practice was prior to the Declaration of Helsinki of 1964, which established a series of ethical principles for medical research in human beings.

Lobotomies were not performed with a “toothpick” Through the nose, as the viral meme suggests. The prefrontal lobotomy performed by Moniz consisted of make holes In the skull on both sides of the prefrontal cortex and inject alcohol into the connection fibers to destroy them.

Later the American neurologist Walter Freeman He conceived and practiced the transorbital lobotomy, in which the brain was reached with an instrument similar to a picahielo through the ocular basin.

The lobotomy was abandoned as therapeutic treatment, in part for its scarce results and by the arrival of psychoactive drugs in the 1950s.

Nasal swabs do not damage the brain or membrane

Theories that the swabs affect hormone production, that they contain dangerous chemicals or compounds, or that they damage the blood-brain barrier have circulated throughout the covid-19 pandemic and have already been verified by AFP Factual.

the neurologist Cristiane Nascimento.Coordinator of the Scientific Department of Neuroonfection of the Brazilian Academy of Neurology (ABN), he explained to the AFP in this verification that the procedure for a nasal swarn to detect the infection by Coronavirus consists of “Insert the rod into the nose and reach the posterior wall of the nasopharynx. There, we rotate and obtain the necessary material for the analysis. “

The specialist detailed that the exam is carried out in the nasopharynxthat is, the upper part of the throat, behind the nose, “And it has nothing to do with the blood-brain barrier.”

AFP Factual also contacted Juan Sabattedoctor and doctor in microbiology and researcher of Conicet, Argentina, who ruled out in this verification that the swab can pierce said barrier:

“In no way can it be damaged by a swab that contacts the nasopharynx, that is, ‘the bottom of the nose’. It is worth clarifying that the nasopharynx is separated from the brain, among other things, by the bone of the base of the skull. Trying to reach the brain on that way with a swab is as little feasible as going through the skull from the outside with that element. “

“To access the brain from the nasopharynx, a bone called the ethmoid must be fractured”explained Latini, who added that the blood-brain barrier can be pierced with a needle but never with a blunt element such as a swab.

If the blood-brain barrier is damaged, it can compromise the brain. However, the neurologist Nascimento explained, this damage is not the responsibility of a nasal swab, but of some diseases such as meningitis or encephalitis.