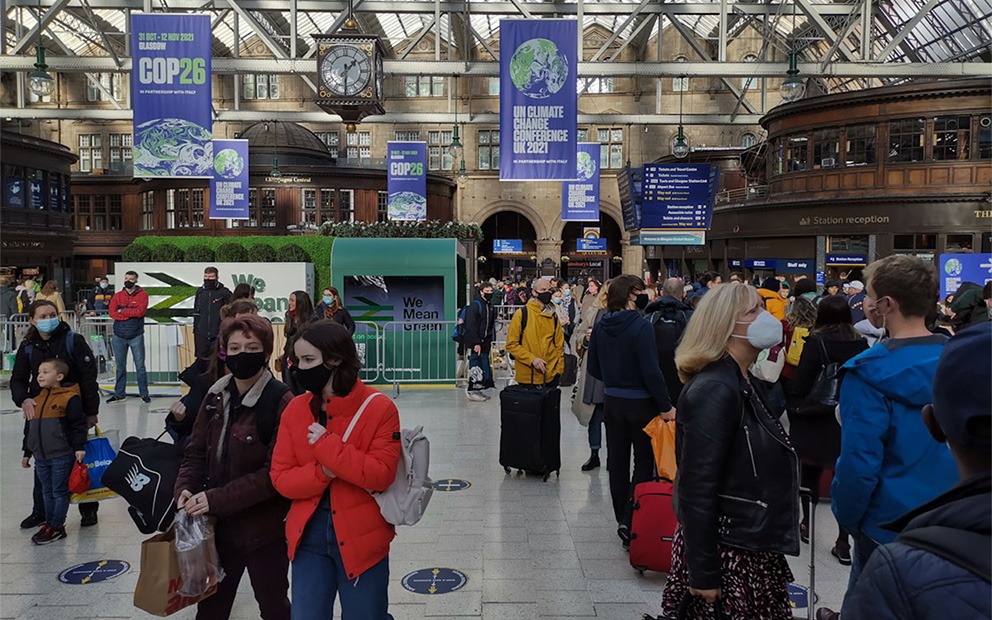 Within hours of COP26 kicking off in Glasgow, Scotland, Footer interviewed David Satterthwaite one of the leading scientists specializing in climate change. His work led him to be part of the team that won the Nobel Peace Prize in 2007. The researcher outlines a complicated scenario for the world, especially since it leaves the most vulnerable communities in oblivion.

GLASGOW, SCOTLAND.- As soon as the world witnessed how climate events hit more frequently, the United Nations Organization orchestrated a scientific body to diagnose the climate crisis. Since then the British David Satterthwaite has collaborated and published works in some of the most prestigious universities in the world.

In a short video call, the researcher at the International Institute for Environment and Development (IIED) and professor at University College London explains that even when the Conference of the Parties was formed in 1995, people were too pessimistic or too enthusiastic about what a conference featuring almost 200 countries could achieve. Satterthwaite, assures that the convention “is necessary”, but still says “it is difficult to imagine an alternative framework that could take us where we need to (to prevent climate change)”.

-What expectations do you have for Cop26?

– I am concerned that governments (of industrialized countries) are using production-based emissions inventories more than consumption-based inventories, because they are better off there.

For decades, the yardstick with which countries’ pollution is measured has been estimated through production. But Satterhwaite explains that this kind of measurement is misleading. For example, in recent years China has become the “world’s factory”, which has caused its emissions to multiply; while the countries that buy the inputs made in the Asian giant have reduced them. Satterthwaite’s idea is that measurement should be passed on to consumers.

–What should be done to also take consumption into account in pollution measurements?

– We must have an approach from both fronts. Each one provides different reflections on how to address climate change and gas emissions.

Satterthwaite explains that politically this discussion is very difficult to pick up on. For example, emissions from Europe and the United States would likely double if purchased goods were taken into account.

The scientist recounts the example of the community of Beddington, in the United Kingdom, which implemented systems for building houses and infrastructure with recycled materials to reduce their ecological footprint. The people of this neighborhood, also known as BedZeD (Beddington Zero Energy Development) work from home, use public transportation, bicycles and green energy sources; This meant significant savings on their electricity and gas bills. Their emissions balances were very carefully planned.

Further investigation revealed what BedZED residents were doing with those savings. The results were very revealing. They used them to take vacations in Spain. “And they were traveling by plane! (one of the most polluting forms of transport). This, in a way, sums up the contradictions in this world ”. That is why several scientists are pushing for more comprehensive ways to measure pollution.

–In countries like Mexico, discussions about climate change do not seem to be so widespread among the population. On the other hand, in London we have found advertisements and a lot of awareness on the subject. What do you think about it?

– One thing that seems interesting to me is that when politicians set goals for the future, they know that eventually the time will come to make an evaluation, to balance the accounts, but it will no longer be their management. I think it is important to be aware of how we do to achieve the common goals in each region.

Satterthwaite’s work has focused on Africa, Asia and Latin America, mainly on the living conditions of the poorest populations. The researcher’s work within the IPCC earned him recognition, along with other scientists, with the Nobel Peace Prize in 2007. At that time, it was noted that the IPCC had created an increasingly broad informed consensus on the connection between activities. humans and global warming. It was also warned: “Global warming not only has negative consequences for human security, but can also fuel violence and conflict within and between states.”

Despite the important role it plays in the UN Global Warming system, David Satterthwaite is careful when he talks about his expectations for this year’s Cop. After all, as he says, he is a scientific expert and, according to what he says, he is not a specialist in political lobbying matters.

Since the IPCC was formed, Satterthwaite stressed that mitigating emissions was not enough. At the same time, actions should be integrated so that communities affected by the effects of climate change have greater resilience, especially communities in developing countries.

This is precisely an agenda that Satterthwaite promoted since he joined this group in 1997.

-When I walked in, I was in awe of being there. Since then we have mentioned the importance of municipal and local authorities in terms of adaptation, but it was an issue that was put aside. So I raised my hand and asked my colleagues: How many of you know about municipal budgets for small cities in lower-income countries? The silence was absolute.

Although the IPCC team is made up of some of the best scientists on the subject, none of them had much idea of ​​what was happening in other parts of the world. It was then that Satterthwaite turned to give voice to small urban organizations, community and social movements. Thus began a path that contributed other forms of knowledge from organized communities.

– As of 2004 we began to publish articles on climate change and adaptation in our scientific journal Environment and Urbanization (Environment and urbanization). These articles gathered many experiences and we were able to publish those stories and their data in the final IPCC report of that year.

With this they managed to integrate the decent housing agenda, with good territorial planning, with that of development and adaptation to climate change.

– Many times people ask me what we should do, and many times I don’t know how to tell them what they should do. I think they should look at where they have a certain advantage, a certain lever, and continually push in that direction. I am not good at lobbying, I do not have high expectations for this Cop, I just hope that we have made a good contribution through the IPCC and I prefer to stick to that.

A paragraph from the last report

-What should be the role of Mexico in these issues?

If someone talks about cities, like Mexico City, they immediately gain attention, because it is one of the largest cities and about which there is a strong debate. I don’t know how effective it is now, but Mexico City has implemented very successful actions regarding climate change. I remember reading a couple of writings about it that showed very progressive actions.

-The COPs were born when the world was more integrated, with the passage of time there is a stronger fragmentation, we see it with Brexit or with the arrival of right-wing governments that tend to be very isolationist. Isn’t it a problem when facing the climate change problem in a coordinated way?

-Before that, the duty to maintain hope is even greater. Because, it is very difficult to go to bed with hope, especially when one wants politicians to appear with real commitments to attend to the dangers caused by climate change.

-What are your fears and hopes about the climate crisis?

-I have many fears and many worries. Sometimes I sit with my three-year-old grandson and wonder what the world will be like when he is 20, 60 or 70 years old like me. We have consistently seen over the past 20 years the recognition that we can solve these problems. But governments have not taken seriously the steps necessary to achieve this. I guess I feel very pessimistic, however my mentor, Barbara Ward, who founded the IIED, where I work, when asked this question, answered that it is our duty to have hope. And I think that pretty much sums up how I feel.

In this conference you can review in greater depth the work and proposals on adaptation and urban development made by Satterthwaite:

He was educated in Catholic schools until he became an atheist. He is sullen and globetrotting. He studied journalism and never graduated. You tend to have more faith in old narratives than new ones. He likes to write stories.

Journalist in constant search of the best way to tell each story and thus provide a service to citizens. I analyze databases and make graphs; I narrate experiences that give meaning to our reality.

“It is our duty to have hope” – Footer