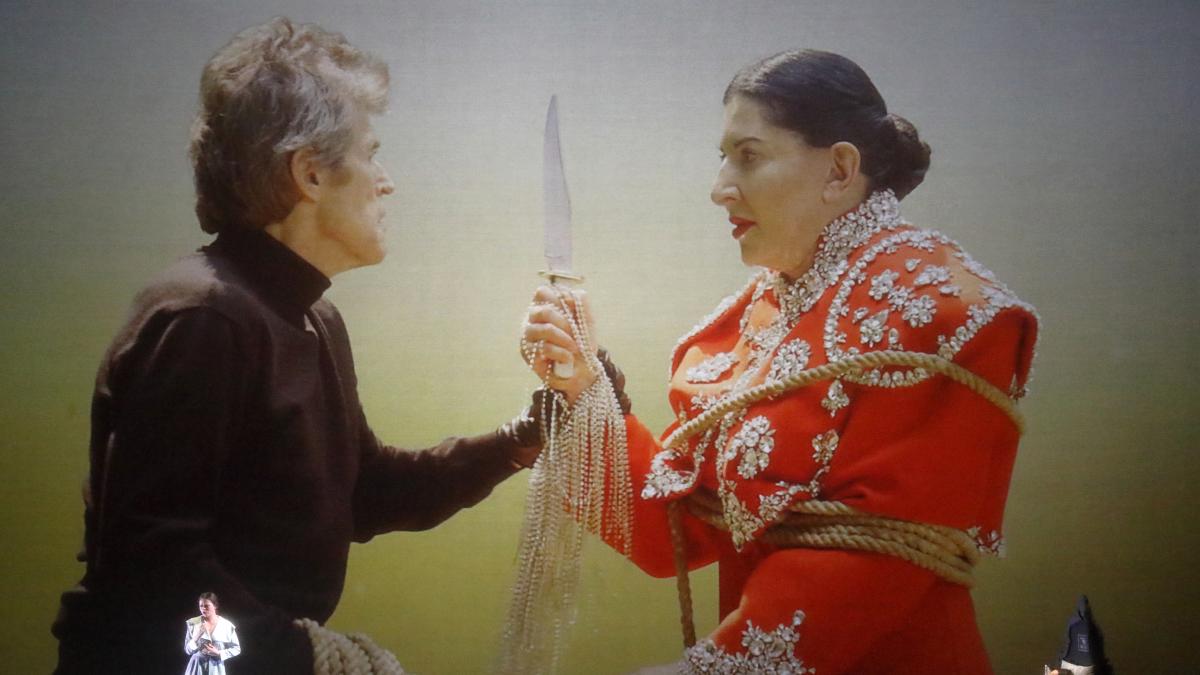 The plastic artist and sculptor Jaume Plensa will assume, as announced a few months ago, the staging of the new Macbeth that the Liceu will premiere next season. His iconographic universe and his strong aesthetic presence will be the setting for this dark and devilish drama by Verdi, starring Luca Salsi and Carlos Álvarez as Macbeth and Sondra Radvanovsky and Anna Pirozzi as Lady Macbeth.

And hers will not be the only great production that will mix disciplines: the artist and performer Marina Abramovic will present her show on Maria Callas (on the centenary of the famous soprano) that unites opera, live art, performance and video creation, while the sculptor Antonio López will make his first stage proposal with that world full of wounds that is the winter trip of Schubert. And it will be at La Model.

The artistic director of the lyrical coliseum, Víctor Garcia de Gomar, is determined to turn the opera house into the Liceu de les Arts. Something that is taking greater shape in the 2022-23 season that was presented this Tuesday. With the leitmotif of the ‘jump into the void’, De Gomar seeks to structure a program with a clear crossover vocation in which “the characters of the titles are faced with decisions that imply a point of no return: Tosca, Manon, Parsifal…”.

Only by accepting the risk can we move towards the future, says De Gomar. And for this he places the spectator as the protagonist, so that the theater is no longer a prescriber but a connector of experiences and a cultural mediator for society. And among the other creators who will bring the theater closer are the American poet Louise Glück, Nobel Prize 2020, and the Brazilian photographer Flávia Junqueira, who will make one of her installations with balloons in the Liceu hall at the beginning of the season.

It will be a season with baroque, belcanto, Verdi, Wagner, Puccini, French opera and new creation

But despite everything there will be opera, great voices and notable musical and stage directors. There will be belcanto, Verdi, verismo, Wagner, French opera, newly created compositions, new productions -focusing on the creation of the country- and abundant baroque opera.

And especially unusual and fabulous will be the tandem formed by Calixto Bieito as stage director and Jordi Savall as musical director in this L’incoronazione di Poppea by Monteverdi, whose production premiered four years ago in Zurich, becoming one of the most acclaimed shows of recent seasons. Julie Fuchs is the sultry Poppea who goes from ambitious courtesan to decorated empress. She is supported by voices like David Hansne (Nerone), Magdalena Kozená (Ottavia) or Xavier Sabata (Ottone).

The course will open with Don Pasquale by Donizetti in the successful production by Damiano Michieletto and the voices of notable Spanish singers, Carlos Chausson, Xabier Anduaga and Sara Blanch. The latter will alternate in the second cast with Serena Sáenz, another of the young Catalan sopranos with the greatest future.

Josep Pons will take the baton in this bel canto title -a terrain little explored by the Liceu’s musical director- and also in Macbeth and Il trovatore of Verdi. The latter with a stage production by Àlex Ollé that is inspired by the games of power and the trench battles of the First World War. This was commissioned by the Paris Opera and the Amsterdam Opera that the furero premiered more than five years ago and that can finally be seen in Barcelona. With singers like Saioa Hernández or Vittorio Grigolo.

Àlex Ollé will show his montage of ‘Il trovatore’ which premiered in Amsterdam, inspired by the Second World War

The theater rescues Parsifal by Wagner that Claus Guth staged in Barcelona, ​​with a luxurious cast that includes Nikolai Schukoff, Elena Pankratova, René Pape, Matthias Goerne and Evgeny Nikitin. A title that Pons will also direct. But there will be other guest teachers in the Liceu pit, and one of them will be Marc Minkowski, with Manon of Massanet.

Javier Camarena and Nadine Sierra, who already appeared as a couple at the Liceu last season, with Lucia di Lammermoorare the main couple of Manonparadigmatic title of the French repertoire and a story that, De Gomar recalls, “speaks to us from the provocation and from two teenagers who jump into the void”.

One of the highlights of the season will come from Puccini: Il trittico (Il tabarro, Suor Angelica Y Gianni Shichi), the sum of three independent operas united in one piece of music. This bet lands at the Liceu with a feminine look, both by the baton, Susanna Mälkki, and by the production, from the Bayerische Staatsoper in Munich, signed by Lotte de Beer. And in the extraordinary voices of the Norwegian Lise Davidsen, the Albanian Ermonela Jaho or the Italian Ambrogio Maestri.

And also from Puccini will be the new rough which the Liceu co-produces with La Monnaie de Bruxelles, with the point of view of Rafael R. Villalobos a la reggia, who draws a parallel between the oppression of the plot and the death of Pierre Paolo Passolini. It will star Aleksandra Kurzak and Roberto Alagna. Riccardo Frizza will direct it from the pit.

Raquel García-Tomás will be the second woman to premiere an absolute work in its 175-year history: ‘Alexina B’, about an intersex

And the composer Raquel García-Tomás will be the second woman to premiere an absolute work in the 175-year history of the Gran Teatre, after Matilde Salvador, who did vinatea in 1974. He will do it with a story about an intersex person who fights for identity but ends up committing suicide in his loneliness. alexina b.which is so titled, has a libretto by Irène Gayraud inspired by the story of Adélaïde Herculine Barbin, born in France in 1838. The staging will be by a close collaborator of the composer, such as Marta Pazos.

There are a total of nine staged operas, although the season has 13 titles, plus 3 dance titles, 14 concerts and recitals and 10 LiceuAprèn shows. In total, 40 titles with 204 functions. And there will be operas in concert that represent a “leap into the void into mythology”: René Jacobs conducts the Orpheus and Euridice de Gluck with the Freiburg Baroque Orchestra and Mark Minkovski also conducts alcin with his Musiciens du Louvre.

Union of opera and dance

In addition, the Liceu hosts a show halfway between dance and opera… A Dido & Aeneas by Purcell with William Christie conducting Les Arts Flourissants and Blanca Li reinterpreting this story about the power of feelings and betrayal from the choreography.

It is not the only thing that the Liceu dance programme. Akram Khan, whose long-awaited Giselle by the English National Ballet will soon be seen, returns with Jungle Book reimaginedabout him Jungle Book of Kipling. A reflection on climate change and the interdependence of humanity with nature and the animal kingdom.

And finally, the Ballets de Montecarlo land with their experimental Coppél-iAthat is, the famous romantic piece about automata based on the story by ETA Hoffmann, but here brought to the society of artificial intelligence.

As this 2022 will continue to be the 175th anniversary of the Liceu, the theater will become a temple of great voices with evenings starring Piotr Beczala and Sondra Radvanovsky, Cecilia Bartoli, Sara Blanch and Xabier Anduaga. Although one of the surprising recitals will be the one that brings together three generations of Wagnerian sopranos: Waltraud Meier, Iréne Theorin and Lise Davidsen… It will be heard Fidelius either Elektra.

And in the symphonic cycle, Gustavo Dudamel, who has just won a Grammy -his fourth already, this time for his recording of Mahler’s 8th with the Los Angeles Philharmonic-, will visit Barcelona at the beginning of the season, recovering that exchange orchestral with the Paris Opera and the Liceu Symphony that had to be postponed due to the pandemic. The Venezuelan director and his now Parisian orchestra will equip themselves with Mahler’s Ninth, just as Josep Pons begins the integral of this composer’s symphonies with the orchestra of the theater of the Rambla. This course they will perform the 3rd and 6th, and on their trip to Paris they will offer an opera, Bluebeard’s castle by Bartók, with the soprano Iréne Theorin and the tenor Bryn Terfel.

On the other hand, the Liceu is putting on track the (Òh!)pera project that Àlex Ollé pilots, as the theater’s resident artist. This collaboration with the Regidoria de Turisme i Indústries Creatives of Barcelona City Council, the Disseny Hub and the city’s design schools aims to encourage learning and practice, so that teams of young people will be formed to design 30-minute operas that speak of current affairs. It is, says De Gomar, the leap into the void of the creators of the future.

The digital season of Liceu-Live will kick off, with ‘Il trovatore’, ‘Il trittico’, ‘Tosca’, ‘Macbeth’ and ‘Manon’

With regard to affordable prices, the LiceuUnder35 continues to offer functions at 20 euros for young people. will be Il trovatore, Tosca, Alesina B. Y Dido & Aeneas. In addition, the digital season of the Liceu-Live will start, with live viewings and an edited version. With this, the theater seeks both the internationalization and the accessibility of the opera throughout the territory. This season 22-23 will be passed Il trovatore, Il trittico, Tosca, Macbeth Y Manon. And on the other hand, 100% flexible subscriptions are invented, which allow unlimited changes in titles and dates.

A budget of 51.4 million euros

The budget for the next season of the Liceu amounts to 51.4 million euros, of which 24.68 come from public administrations. According to the general director, Valentí Oviedo, this last figure includes the 1.3 million aid derived from the pandemic.
The artistic activity has taken this time half a million more than the current season: 16.2 million euros. While 2.1 million are allocated to the educational project. The number of subscribers is increasing, although the objective of the theater is to reach 17,500 (two thousand more than currently). Although the price of subscriptions will also rise by an average of 3 percent. That yes, for the first time they will be flexible, “because people’s agendas are increasingly complex and they need to be able to change both title and dates without limits”, concluded the general director.

Jaume Plensa will stage ‘Macbeth’ and Marina Abramovic will revive Callas: it is the Liceu de les Arts