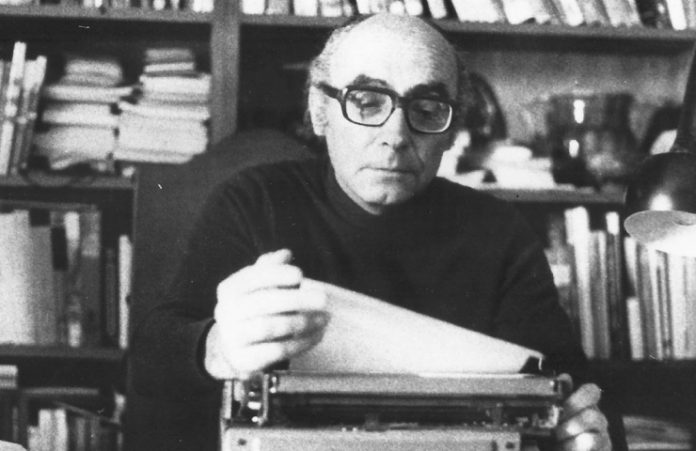 The centenary of the Portuguese writer and journalist is commemorated. As a communist militant, he actively participated in the 1974 Carnation Revolution that overthrew the dictatorship in his country. He shouted far and wide his indignation and his disgust at the fate of the oppressed throughout the world.

This year marks the centenary of the Portuguese writer and journalist José Saramago. Author of dense novels, bordering on the fantastic, that invite us to rebel against the state of the world, Saramago is the only Portuguese to be decorated with the great collar of the Order of Santiago de España and continues to be the only one to this day. Portuguese-speaking author who received the Nobel Prize for Literature in 1998, as well as the Camões Prize in 1995. His intellectual curiosity made the young Saramago self-taught, but also a man committed to the causes of his time.

José de Sousa Saramago was born on November 16, 1922 in Azinhaga, in the center of the country, in a small town of Ribatejo, just as modest as his family. He was the second and last son of José de Sousa, a day laborer, and María da Piedade, a housekeeper, a couple of poor peasants. The surname Saramago is actually the nickname by which the writer’s paternal family was known in Azinhaga.

During the first two years of his life, he lived there with his maternal grandparents, who worked in the fields and raised cattle, both of whom were illiterate. In the countryside, he developed a deep connection with nature, and with it a great capacity for observation and sensitivity towards the elements of nature, which was reflected in his subsequent poetic works, novels, chronicles and stories, where he captured his melancholic and lonely. In 1924 the family moved to Lisbon, because the writer’s father started working in the Public Security Police.

Although he grew up in a home without books, from an early age he felt passionate about them and his attraction to literature led him to frequent various libraries, mainly the library of the Industrial School and the Municipal Library of the Galveias Palace. There he acquired his first knowledge of the language in 1928, but it was not until the following year that he learned to read, while constantly trying to read the articles published in the newspaper. Newspaper.

He read Molière for the first time in a Portuguese-French phrasebook, and Émile de Richebourg, through the book The mill warbler. In 1930 he moved to the primary school in Largo do Leão, and he and his family had to live constantly in rented rooms on various streets in Lisbon. For two years, from 1933 to 1935, he studied at the Gil Vicente High School, where he started secondary school, but dropped out due to the difficult economic situation the family was going through.

He was forced to begin studies at the Afonso Domingues Industrial School, with the aim of receiving technical training in mechanical locksmithing. Despite its technical nature, the school taught courses in the humanities, especially in the literary field. It was in this institution where José Saramago learned French, a language that constituted one of the main elements in his work as a translator.

He finished his studies in mechanical locksmithing in 1941 and immediately got a job related to this profession in a mechanical workshop, where he would work until 1943. Parallel to this profession, in 1942, Saramago obtained the position of “clerk’s apprentice” in the Services Administrative staff of the Civil Hospitals of Lisbon, as well as the head of the services in the Family Aid Fund of the Ceramics Industry Personnel.

At the age of 25, he tried writing and published his first novel. land of sin, in 1947. In the late 1940s and early 1950s, he wrote short stories that were published in various major newspapers and magazines. Starting in 1955, he left Lisbon and moved to the town of Parede. He began his work as a translator of literary works and humanist works written in French and that had to be translated into Portuguese. This work was carried out throughout the decades from 1960 to 1980.

19 years passed until he published again, this time a book of poetry, Possive poems. In the following years, his literary production was regular and diverse, with works of different literary styles, such as poetry, novels, short stories, and plays. As a novelist, the author established himself by receiving the award «Lisbon city» with his work raised do chaeither (1980), which became an international bestseller. with the novel Memorial of the convent (1982), considered his iconic work, received the Portuguese Pen Club award. He received the Nobel Prize for Literature in 1998, having written his most popular works Essay on blindness in 1995 and all the names in 1997.

In the year 1971, he wrote some papers that expressed his ideas and his position before social situations, especially those of a political nature, such as the dictatorship, political parties and cultural politics. His desires for freedom and democracy were reflected in his writings, as he was a fervent opponent of the Salazar regime. He joined the Portuguese Communist Party, PCP, in 1969.

A born protester, he was in all the fights. He actively participated in the 1974 Carnation Revolution that overthrew the dictatorship. He shouted far and wide his indignation and his disgust at the fate of the oppressed of our world. The following year, Saramago actively participated in the work of the PCP and also joined the Unitary Movement of Intellectual Workers for the Defense of the Revolution, MUTI.

His political activity also increased in the following year, as he was part of the PCP campaign for the elections of the first democratic president of the Republic of Portugal, elections that took place after the fall of Salazar.

In addition, he collaborated in the writing and publication of the book Written and Combat, in which various communist intellectuals participated and which was published by the PCP itself. In November 1975, he was deputy editor of the newspaper Newspaper, but he was fired for political reasons and decided to devote himself entirely to literature.

Saramago was a fierce critic of the Catholic Church, a preferential target of some of his works, such as The Second Gospel Jesus Christ (1991) and caim (2009). As a staunch defender of the Palestinian cause, his books are boycotted by Israel. In 1992, the Portuguese government accused him of “damaging the religious heritage of the Portuguese people” and censored his novel. The Second Gospel Jesus Christ.

After his second marriage to the Spanish journalist Pilar del Río, Saramago decided to live from 1993 on the island of Lanzarote, in the Canary Islands. Always attentive to the world around him, his literary consecration never prevented him from dedicating himself to the causes in which he believed.

In 2007 he created the José Saramago Foundation for the defense and dissemination of the Universal Declaration of Human Rights and environmental issues, but he did not live long enough to attend its inauguration in 2012 at Casa dos Bicos, in Lisbon. He died in Spain on June 18, 2010, but the foundation that bears his name keeps the cultural and social project alive, under the direction of his wife, Pilar del Río.