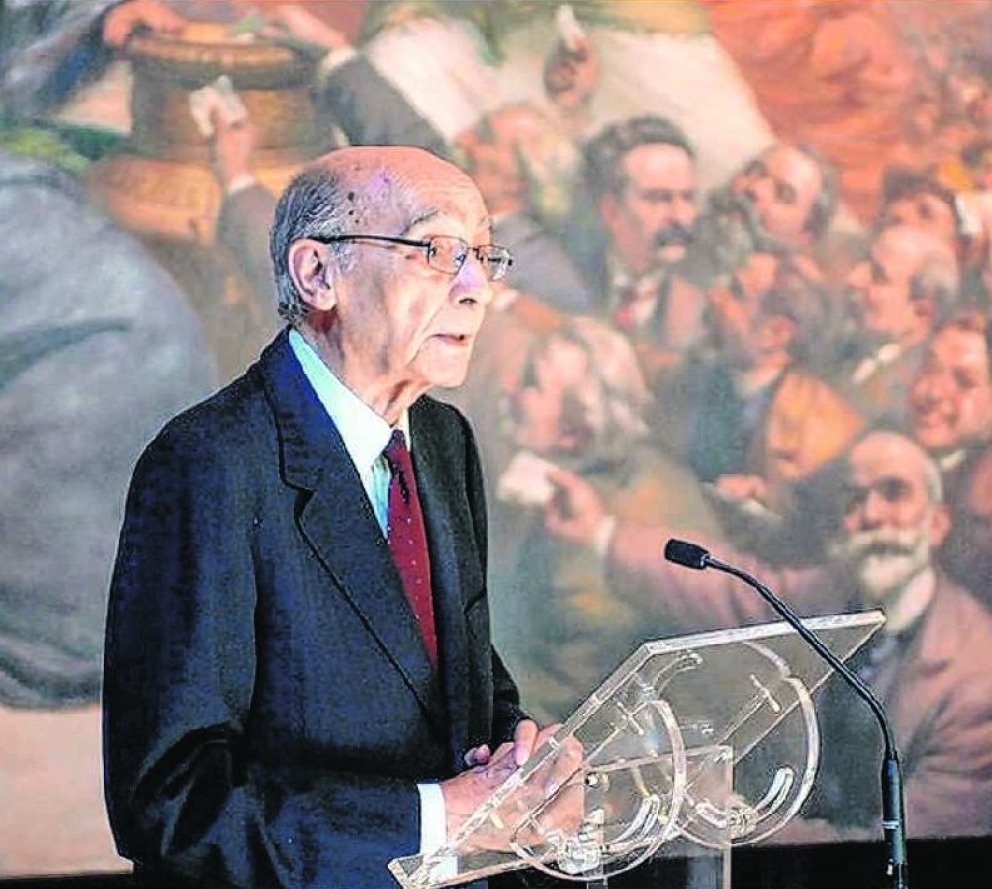 On the centenary of his birth, we remember the writer who was the Portuguese Nobel Prize winner and a recognized defender of Human Rights.

On November 16, 1922, José de Sousa Saramago was born in the small town of Azinhaga, Portugal. His peasant parents were named José de Sousa and Maria da Piedade. “José de Sousa would also have been my name if the civil registry official, on his own initiative, had not added the nickname by which my father’s family was known in the town: Saramago,” the writer recounted in the autobiography of the.

There he also clarified that saramago was a herb whose leaves served as food for the poor. In addition to telling another infidelity about his origins: “Although I came into the world on November 16, 1922, my official documents indicate that I was born two days later.”

At the age of two, he moved with his family to Lisbon where his father worked as a public security police officer. He was a good student in primary school: “In the second class he already wrote without spelling errors, and the third and fourth classes were done in one year.” He later entered high school, until for economic reasons he had to drop out to learn the trade of a mechanical locksmith working for two years in an auto repair shop. In 1944 he married Ilda Reis, then a typist, who would later become one of the most important engravers in Portugal. At that time he worked as an administrative employee at Social Security, and in 1947 his only daughter named Violante was born. That same year he published his first novel, Land of Sin, published in Portuguese and originally called La viuda. Although his popularity in the literary field would come decades later. Around this time he also wrote his second novel Claraboya, which remained unpublished until after his death.

“Saramago suffered from a respiratory disease for which he wrote Las intermitencias de la muerte in 2005. He never stopped writing despite the progress of his illness and came to publish the novels El viaje del Elefante (2008) and Caín (2009)” .

In 1949 he joined the Communist Party in opposition to the Salazar dictatorship and for this reason he was fired from his job. He then began to collaborate in the publishing house Estudios Cor while working in an Insurance Company. Four years later, he would leave this job to become a literary editor. During the fifties he devoted himself fully to the translation and literary criticism of authors such as Tolstoy and Baudelaire.

Then he stopped writing for 19 years. He returned to literature with Possible Poems in 1966. He collaborated as a literary critic in the magazine Seara Nova. In the seventies he was coordinator of the cultural supplement in Diario de Lisboa and published a series of texts that would be published in De este mundo y del otro (1971) and Las maletas del viajero (1973). In 1975 he left the publishing house to take up the position of sub-director of Diário de Notícias.

José Saramago actively participated in the Carnation Revolution that put an end to the Portuguese dictatorship in 1974. He moved to Lavre for a few months where he lived with the workers of the Boa Esperança Production Cooperative Union, an experience that inspired his novel Raised from the ground (1980). ) in which his new narrative was born. And in 1986 he met the Spanish journalist Pilar del Río, whom he married two years later.

Although The Gospel According to Jesus Christ (1991) was the work that consolidated Saramago as a writer, the Portuguese government prevented its submission to the European Literary Award on the pretext that it was offensive to the Catholic faith. For this reason, he decided to move with his wife to the Spanish island of Lanzarote, which gave rise to the first volume of Cuadernos de Lanzarote (1994) and the following year his renowned work Essay on Blindness appeared, the first installment of his trilogy on identity. of the individual, and the second volume of Cuadernos de Lanzarote.

His literary work was recognized both outside and within his country. She won the Portuguese Critics Association award for the play La noche (1979); the Literary Prize of the Municipality of Lisbon (1982). He was also appointed Commander of the Military Order of Santiago de Espada; he was awarded the Critics’ Prize for his body of work (1985) and in Italy he received the Grinzane-Cavour Prize (Alba) and was named doctor honoris causa by the University of Turin among other international awards.

But the greatest achievement was obtained in 1998 when he received the Nobel Prize for Literature. “As a result of the award of the Nobel Prize, my public activity has increased. I traveled the five continents, giving conferences, obtaining academic titles, participating in meetings and congresses, both of a literary, social and political nature, but, above all, I participated in actions that demand the dignity of the human being and compliance with the Declaration of Human Rights through the achievement of a more just society, where the person is an absolute priority, and not the trade or the struggles for a hegemonic power, always destructive”, said Saramago upon receiving the award.

His film adaptations include La balsa de piedra, a co-production between Spain, Portugal and the Netherlands directed by George Sluizer and starring Federico Luppi and Gabino Diego. Also Essay on Blindness, directed by Fernando Meirelles and starring Julianne Moore, Gael García Bernal and Mark Ruffalo. In addition to Embarg, directed by Antonio Ferreira and Enemy based on the book The Duplicate Man and directed by Denis Villeneuve. In the 1980s he published, among others, Trip to Portugal, The Stone Raft, the play The Second Death of Saint Francis of Assisi and History of the Siege of Lisbon. In 2004 he published the final novel in the trilogy, Essay on Lucidity. And in 2007, together with his wife, he created the José Saramago Foundation, whose objective is to protect Human Rights, promote culture, and preserve the environment.

Saramago suffered from a respiratory disease for which he wrote Las intermitencias de la muerte in 2005. He never stopped writing despite the progress of his illness and came to publish the novels El viaje del Elefante (2008) and Caín (2009) while still alive. Posthumously, Claraboya (completed in 1953 and published in 2011); Halberds (2014), The Silence of the Water (2014) and The Widow (2021). His books have been translated into languages ​​such as Albanian, German, Arabic, Azerbaijani, Bengali, Bulgarian, Cantonese, Spanish, Catalan, Czech, Korean, Croatian (Latin alphabet), Danish, Slovak, Slovenian and Basque, among many others.

Saramago died on June 18, 2010 on the island of Lanzarote, leaving behind the first thirty pages of his novel Halberds (2014). Her legacy was donated in 2017 to the National Library of Portugal to fulfill her will. There are originals of his novels (both handwritten and typed), letters, notes and drafts. A way to counteract the absence of it that remains firm for its readers around the world.