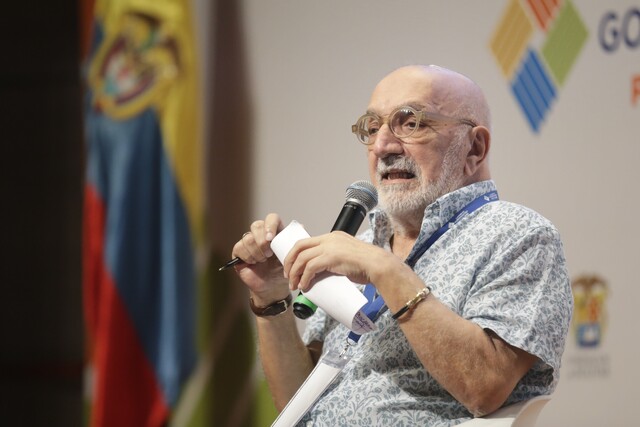 Tweet
Share
Share
Pin
As revealed by the family, through a press release from the clinic where the journalist is hospitalized, his health is stable. Photo: Infobae Colombia Archive.

In the last few hours it became known that the award-winning journalist and writer John Gossain is hospitalized in a clinic in Cartagena of the Indies since last September 18.

According to a statement published by the Medihelp Services Clinic, where the renowned journalist is hospitalized, Gossaín was admitted almost ten days ago after he was operated abroad for a heart condition.

According to what is known so far, Gossaín’s state of health is stable, however, his family, according to the clinic’s press release, has requested information on his state of health to be provided, outside the environment close to the journalist, only when there are significant changes.

Finally, Gossaín’s family thanked the solidarity of Colombians and asked for due respect, understanding the circumstances in which the journalist is involved.

The statement is reproduced below in its entirety:

“The MEDIHELP Services Clinic is allowed to inform those who are interested in the health of Don Juan Gossain that since September 18 of this year he has been hospitalized in our Institution after having undergone surgery outside the country for a heart condition. , being its current stable state. Don Juan’s family has requested that information regarding his health status be provided outside of his environment only when significant changes occur. In the meantime, they appreciate the solidarity and respect due to their current state.” 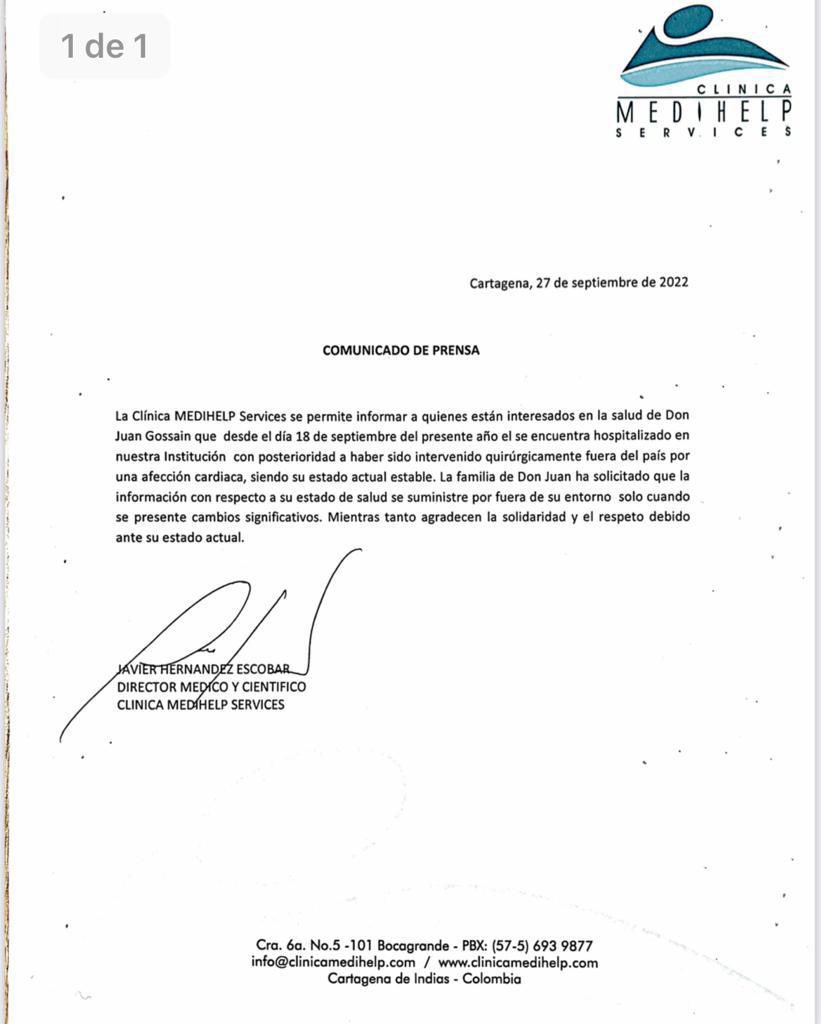 Juan Antonio Gossaín Abdallah is 73 years old and the particular combination of his surnames has always attracted people’s attention. He was born on January 17, 1949 in the municipality of San Bernardo del Viento, department of Córdoba, but is of Lebanese descent; hence his last name.

His father, Juan Santos Gossaín arrived in the country as part of the Lebanese exodus that brought with it a large number of citizens to the Colombian Caribbean coast.

Gossaín’s first journalistic texts were published in El Espectador and created confusion in his town, as some thought they were authored by his father, due to the coincidence of their names. However, the journalist highlights that much of what his career has been is an example of his father, because despite having limitations with the language due to his origin, he fell forcefully in love with Spanish and instilled the same to his son.

According to the book Juan el Hijo de Juan, the father of the writer and journalist, took a stool in his free spaces, sat down and took the Spanish dictionary in order to expand his lexicon, some thought that he would go in search of specific words, however, his purpose was to learn the text from cover to cover. Some even claimed that ‘Don Juan’ could not get past the letter D, however, he managed to ripple through the language in a profound way, molding a sophisticated oratory full of words unknown to some, despite his foreignness.

For Juan Gossaín, the dictionary is necessary and must be learned from beginning to end, in addition, his important name led him to rub shoulders with the myth of Colombian literature, Gabriel García Márquez, the Nobel Prize winner who managed to write a prologue for the journalist and highlighted the great admiration and affection he had for Gossaín. Throughout his career, Juan Gossaín has been awarded the Simón Bolívar Award for his outstanding journalistic career, as well as being decorated by the Circle of Journalists of Bogotá, where he praised his life and work.

It is worth remembering that in April of this year Gossaín was appointed as a full academician of the Colombian Academy of Language, for the important contribution that the renowned journalist has made to the development of the Spanish language in the country, in addition to his vaunted journalistic and literary career. .

Laura Tobón’s definition of beauty: “it is synonymous with trusting ourselves”
Chilling act of justice by his own hand in Caquetá: one of the accused had a limb amputated
For this reason Gustavo Petro’s tax reform will no longer collect 25 billion pesos

Juan Gossaín has been hospitalized in Cartagena since September 18, the family asks for respect and thanks for the solidarity