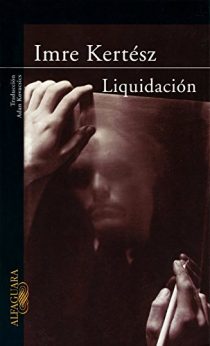 Imre Kertész (1929, Budapest – 2016, Budapest) was awarded the Nobel Prize for Literature in 2002. In 1944, at the age of 15, he was deported from his native Hungary to the Auschwitz (Poland) extermination camp and then to Buchenwald (Germany). ).

In 1945 he is released, he can go to France, but he decides to return to Hungary where he finishes secondary school in 1948. His first job is as a journalist and translator. In 1951 he lost it when the editorial line of the newspaper turned communist.

At the age of 24, in 1953, he began working as an independent journalist and translator. Into Hungarian he translates works by the Germans Friedrich Nietzsche, Segmund Freud, Ludwig Wittgenstein, Elias Canetti and Joseph Roth.

Kertész publishes Settlement (Alfaguara, 2004) in 2003, where he narrates what he lived in the extermination camps and also gives an account of the political and social reality of Hungary.

In the novel B, a Jewish writer and translator, commits suicide after the collapse of the communist regime, in 1990. In the farewell letter he says: “(…) the state of surviving has been annulled. He now he would have to live as an adult, as a man. I don’t feel like this. I don’t want to get out of jail into an infinite space, in which everything dissolves and comes undone (…)”.

His friend Keserü looks for the texts left by B, among them the unpublished work Settlement. The search for the manuscript leads him to meet B’s lover, Sara, and his former wife, Judit.

In the novel appear the extermination camps, B’s love affairs, the books that he never finished and also the political and social reality of socialist Hungary.

The novel that Keserü is looking for does not appear, because someone burned it in compliance with B’s last wishes. It does not feature the Holocaust but the human tragedy of the life that follows it.

In the work of the Nobel Prize there are always autobiographical references with references to Nazism, the concentration camps, the extermination of the Jews, the memory of the past and surviving what has been suffered.

Settlement it is a continuation of his works, but also a rupture. Characters from other of his novels such as B and Judith, who was his partner, are present.

Kertész’s work transcends the tragic and brutal fact of the Holocaust, to penetrate the moral and spiritual crisis of the West.

It is the need to transmit the life that has been lived. Not as a testimony but to penetrate the human condition from a particular experience, which cannot be ignored.

Those who awarded him the Nobel Prize say it is “for a work that preserves the fragile experience of the individual in the face of the barbaric arbitrariness of history.” He was the first Hungarian writer to obtain it.

What we do at Animal Político requires professional journalists, teamwork, dialogue with readers and something very important: independence. You can help us continue. Be part of the team.
Subscribe to Political Animalreceive benefits and support free journalism.

Liquidation, beyond the Holocaust