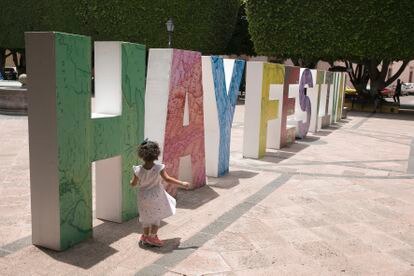 The Hay Festival of Querétaro returns this Thursday to face-to-face after the restrictions imposed by the covid-19 pandemic. The seventh edition, which begins this Thursday and ends on Sunday, will bring together great names in literature, science and politics in Mexico. Nobel laureates Wole Soyinka, for Literature, and Tawakkol Karman, for Peace; the leader of the British pop band Pulp, Jarvis Cocker; the authors Vivian Gornick or Miram Toews; journalists, editors and scientists. This year, in addition, there will be a tribute to the writer Almudena Grandes, who died in 2021.

In total, there will be almost 150 participants and a hundred events at the meeting, which has been organized for 35 years in different parts of the world with talks, workshops, concerts and screenings by local, national and international personalities. In 2021, the edition was held in a hybrid format – between face-to-face and virtual – due to the limitations of the pandemic. But this year the event will once again bring attendees face to face in different spaces in the city of Querétaro, in central Mexico, such as the Teatro de la Ciudad or the Cineteca Rosalío Solano.

One of the most outstanding meetings on the first day of the festival is the conversation between the Yemeni Tawakkol Karman – a human rights activist, journalist and politician – with the director of Oxfam Mexico, Alexandra Haas. Karman is known as “the lady of the Arab spring” for her performance in the 2011 uprising in Yemen. That year she became the first Arab woman to win the Nobel Peace Prize, which was awarded in recognition of her leadership in nonviolent struggle.

The Program continues on Friday with the presentation of the idealist, the latest book by the writer and academic Viet Thanh Nguyen, a reflection “on racism, immigration, the consumer society and the legacy of the Vietnam War”. In addition, the Colombian anthropologist and essayist Carlos Granés talks about his book american rave with the journalist Juan Carlos Pérez. The essay reviews how the proposals for change promised by the right and the left in the 20th century turned cultural utopias into social nightmares.

That day there will also be dialogues around science and technology. Sustainability and the climate crisis are two of the festival’s focuses. Mexican zoologist Andrés Cota Hiriart will present Fieras familiares, a collection of essays in which he narrates his experiences with animals in different parts of the world. In addition, the Mixe thinker Yásnaya Elena Aguilar, the British journalist Emma Graham-Harrison and the Spanish reporter Marta Peirano, a contributor to this newspaper, will talk with the editor of Radio Ambulante Ana Pais about “technological sovereignty, cyber surveillance, the inequalities derived from the algorithms”.

EL PAÍS América, partner of the Hay Festival in Latin America, organizes one of the main talks on Saturday, between the author Rosa Montero and the deputy director of EL PAÍS América, Javier Lafuente. They will talk about “the links between creativity and mental instability”, a topic that the Spanish writer deals with in her most recent book, The danger of being sane. Later, the first African Nobel Prize winner for Literature, Wole Soyinka, will speak with the Mexican publisher Diego Rabasa. Soyinka, imprisoned twice for his criticism of the Nigerian government and one of Donald Trump’s greatest opponents, will speak about Chronicles from the country of the happiest people on Earthhis most recent book, a political satire on corruption in the form of a mystery novel.

The big dates continue on Saturday. The Mexican essayist and thinker Margo Glantz, recently awarded the Carlos Fuentes prize for literature, will chat with the author Gabriela Jáuregui. The writer Vivian Gornick, one of the most relevant voices of the second wave of feminism in the United States, will speak with the Mexican broadcaster Elvira Liceaga. The Mexican chronicler Alma Guillermoprieto will talk with the reporter Olivia Zerón. Canadian Miriam Toews will speak with Lee Brackstone about her book Little unimportant misfortunes, recently published in Spanish. Jarvis Cocker, leader of the British pop band Pulp, will present good pop bad popan autobiographical book published this year.

During the days that the festival lasts, there will also be performances such as that of the Mexican pianist Jorge Viladoms. Or that of the theater company of El Salvado La Cachada, which since 2011 brings together women, all single mothers, who come from the informal work sector: street vendors, market vendors, domestic workers. Their works are based on the biography of their members and are directed by Egly Larreynaga. In Querétaro they present if you had not been born.

On Sunday, the last day of the event, there will be tables dedicated to indigenous communities. In narrate the villages, the historian Iris Calderón and the musician Benjamín Kumantuk Xuxpë will talk with the illustrator and editor Isela Xospa about “the ideologies that have modified the ways of conceiving” writing, reading, school, or collections. Later in women of firethe anthropologist Alicia Lemus will talk with Elvira Liceaga about the resistance of a community led by women to protect the natural resources and way of life of the people of Cherán, in Michoacán.

The Hay Festival will close with a tribute to the Madrid writer Almudena Grandes, who died in November 2021 at the age of 61. “The death of the author, read and loved on both sides of the Atlantic, an exceptional narrator who knew how to approach painful episodes in the history of her country and who, through novels, offered feminist readings of our reality, has marked the end of a time for literature in our language”, says the description of the event. At five in the afternoon a collective reading will begin, to which the public can join, of the series of five novels Episodes of an endless war.

Literature, science and politics in the return to presence at the Hay Festival in Querétaro