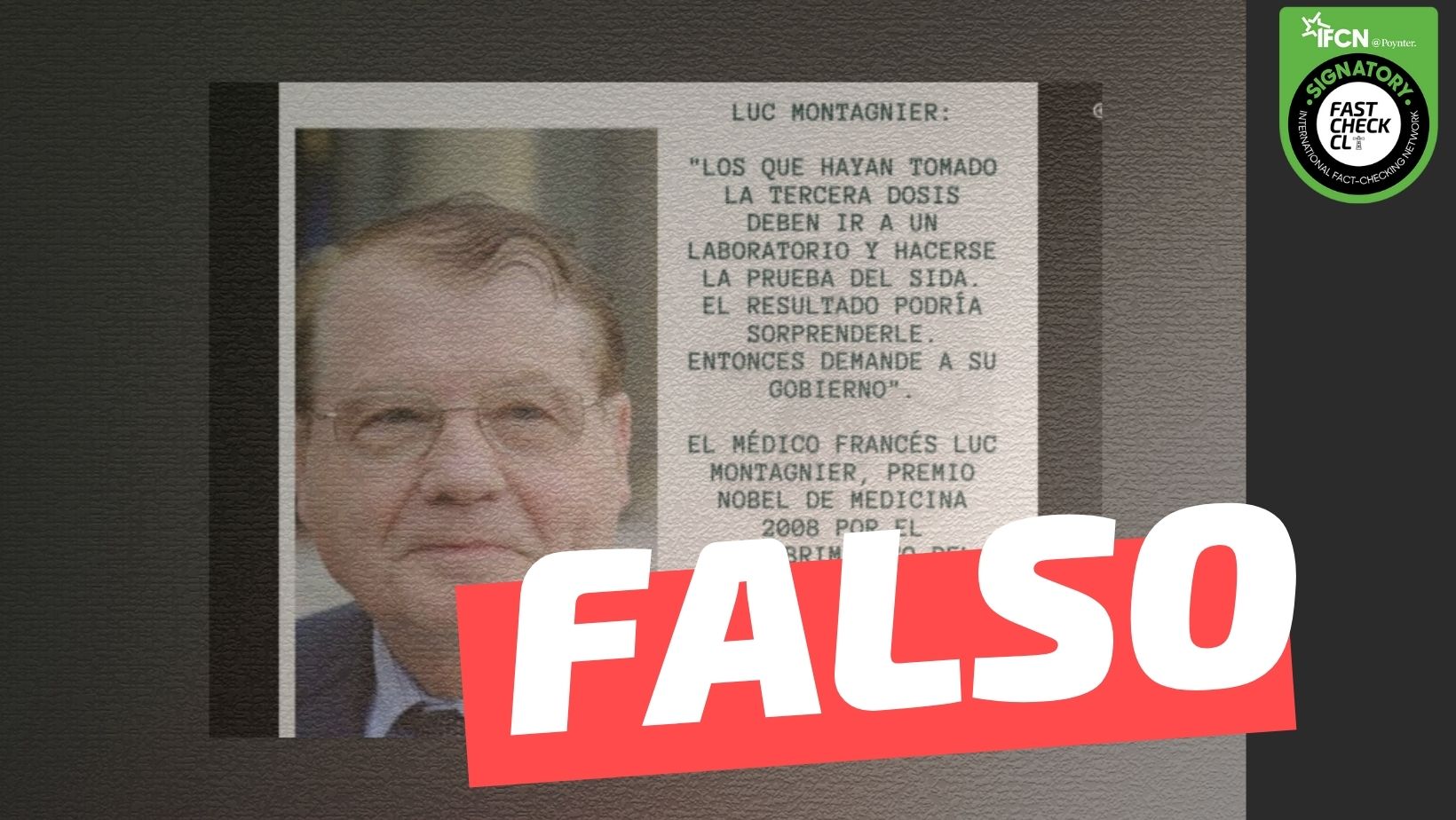 An image was shared on different social networks that ensures that Luc Montagnier declared: «For those who took the third dose, take an AIDS test. The result will surprise you. Then go after your government.” Fast Check CL described the information as false, since there is no record showing that Luc Montagnier delivered said statement. In addition, different experts explain that there is no substantiated relationship that a dose of the covid-19 vaccine has HIV infection among its adverse effects.

If you’re short on time:

By Isidora Osorio and Maximilian Echegoyen

After the death of Luc Montagniera French virologist who won a Nobel Prize for Medicine after discovering HIV, began to go viral on Facebook (1, two, 3) and Twitter (1) an image in which it is ensured that the Nobel Prize winner stated: «For those who took the third dose, get an AIDS test. The result will surprise you. Then go after your government.”

However, this is false. There are no records that show that Montagnier wanted to link the third dose of the vaccine against covid-19 and HIV.

Fast Check CL He searched for the phrase verbatim and by keywords in different search engines, such as Bing, Yandex and Google, to verify if Montagnier had indeed said that. The search was in Spanish, French and English, but found no record of the phrase.

What was found in the media was that, at the beginning of the pandemic (1,two), the winner of the Nobel Prize in Medicine stated that the virus was manipulated and that “they added sequences from HIV (human immunodeficiency virus), the AIDS virus”. But at no time does he point out the phrase attributed to him in the publication.

As for the statement that he delivered at the beginning of the pandemic, this was based on a study by Indian researchers that tried to propose something similar, however, the article it was retired by the same authors.

“This article has been removed by its authors. They intend to revise it in response to feedback received from the scientific research community for its technical approach and interpretation of results.” website the preprint was published.

What do the experts say?

Fast Check CL Different experts were contacted to inquire about any alleged relationship between HIV and the third dose of the covid-19 vaccine and they all agreed that there was no scientific support to support the shared statement.

The infectologist and strategic advisor to the Ministry of Health (Minsal), Rafael Araossaid that “I don’t see the biological reason for that to happen”, adding that “there is no data».

More limited was the response from Michael O’Ryana pediatric infectologist who is part of the advisory committee for vaccines against covid-19 of the Minsal, who, when asked about any link between the third dose and HIV, replied: «It has no handle!».

For its part, Jonas Chnaiderman, a virologist from the Institute of Biomedical Sciences of the Faculty of Medicine of the U. de Chile, specified to this medium that “the matter is quite absurd. HIV diagnostic tests look for specific antiviral antibodies against the virus (part of our defenses). Sometimes there are cross-reactions between antibodies (…), But for cross-reaction to exist, the two viruses have to resemble each other, have a common origin. (albeit far away). In the case of Coronavirus and Retrovirus (the HIV virus family) there is no known relationship, no common ancestor, no phylogenetic relationship».

Finally, the infectologist from the Barros Luco Hospital and academic from the Usach, Ignatius Silvaexplained that “it is completely false. The most obvious thing is that they are using the same vaccines that have been used since the vaccination campaign began, so there would be no difference in adverse effects or anything associated with vaccination with the third, second or first dose.», emphasizing that none of the other doses had any relationship with the HIV virus.

In addition, Silva adds that “it is completely false that vaccination, or covid infection, is associated in any way with the spread of HIV. Of course, people with HIV who are not receiving treatment are at greater risk of becoming infected and having a complicated course, and it is precisely for these people that vaccination is most recommended.”

«No vaccine has another virus or components of other viruses, such as HIV», explains the infectologist, stating that «there is no possibility of getting HIV with a covid vaccine».

Fast Check CL concludes that it is #False that Luc Montagnier said that phrase. In addition, according to different experts consulted for this verification, there is no substantiated relationship that a third dose -or any other dose of the covid-19 vaccine- has HIV infection among its adverse effects.

Luc Montagnier: “For those who took the third dose, take an AIDS test. The result will surprise you. Then go after your government”: #False