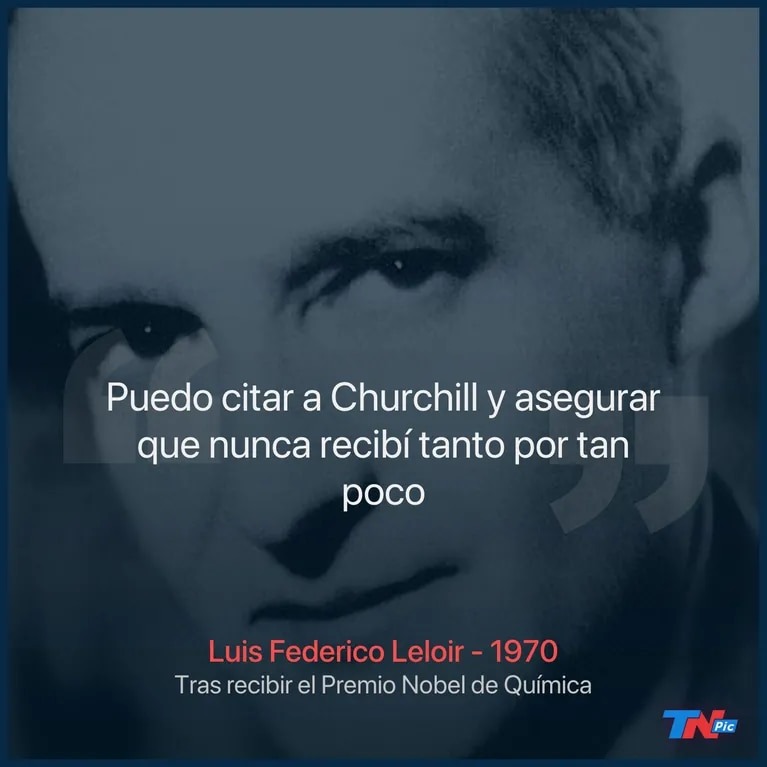 On October 27, 1970, Luis Federico Leloir received the Nobel Prize in Chemistry thanks to his vital discovery of how food is transformed into sugars that fuel human life. In that way, the modest scientist who handled a Fitito he became the third Argentine to be awarded the prestigious Swedish award.

An example of simplicity and austerity, he managed to carry out his research in a miserable laboratory. One of the most remembered photos of him revealed the conditions in which he worked: sitting on a straw chair with legs reinforced with wire.

Luis Federico Leloir He was born on September 6, 1906 in Paris, France, where his family had moved for a surgical intervention that his father had to face, who died shortly after. However, since he was 2 years old he lived in Argentina.

After graduating as a doctor at the University of Buenos Aires in 1932, he worked at the José María Ramos Mejía Municipal Hospital and later at the Department of Semiology and Propedeutic Clinic at the National Hospital of Clinics. However, he later decided to pursue research at the Institute of Physiology at that university. The director was Bernardo Alberto Houssay, who would become in 1947 the second Argentine to win the Nobel Prize. So, Leloir still did not suspect that he would be the third to achieve it.

After the coup d’etat of 1943, he decided to go into exile in the United States. There he began working at the Carlo Gerty Cori laboratory in St. Louis and later at Columbia University College of Physicians and Surgeons in New York. Back in Argentina, Houssay asked him to be the director of the Biochemical Research Institute-Campomar Foundation, which now bears his name.

I also read: An Argentine mathematician won the equivalent of a “Nobel” for her work on causal inference

Leloir was at the head of that laboratory for 40 years, where he made the discovery that would earn him the Nobel Prize, despite the lack of funding and poor equipment.

Specifically, Leloir investigated how sugars are metabolized in the body and the biosynthesis mechanism of glycogen and starch, polysaccharides that are energy reserves in mammals and plants. His great find that earned him the Nobel Prize in Chemistry in 1970 It was the biochemical pathway through which the body harnesses the energy of sugars in order to live and is now called the “Leloir Route”.

This discovery allowed, among other things, to understand the causes of various diseases. For example, glactosemia, a congenital pathology in which the body has an inability to metabolize galactose, whose accumulation can cause damage to different organs of the body. It can even cause death if not detected early.

“Those who are not scientists do not understand what I do in the same way that I do not understand so many other things. It is very difficult to explain. It has to do with metabolism, with the behavior of cells, with complex chemical structures… Look, it’s just part of a path towards what is most important: knowing more”, explained Leloir.

I also read: Who is Abdulrazak Gurnah, the Tanzanian refugee who “accidentally” became the voice of the displaced and won the Nobel Prize for Literature

Modest as always, he added: “Everyone congratulates me, and I appreciate it. But what I discovered is inexplicable to ordinary people: no one would understand. Y I didn’t conquer a planet either: I hardly advanced a step in a long chain of chemical phenomena. Perhaps it will play a role in the better knowledge of the human organism and will make it possible to cure some diseases”.

Leloir did not stop working until the day of his death, December 2, 1987, when he suffered a myocardial infarction at the age of 81 while sitting in the living room of his apartment. In his garage was the modest and historic Fiat 600, better known as “Fitito”, which he had to push to get it started.