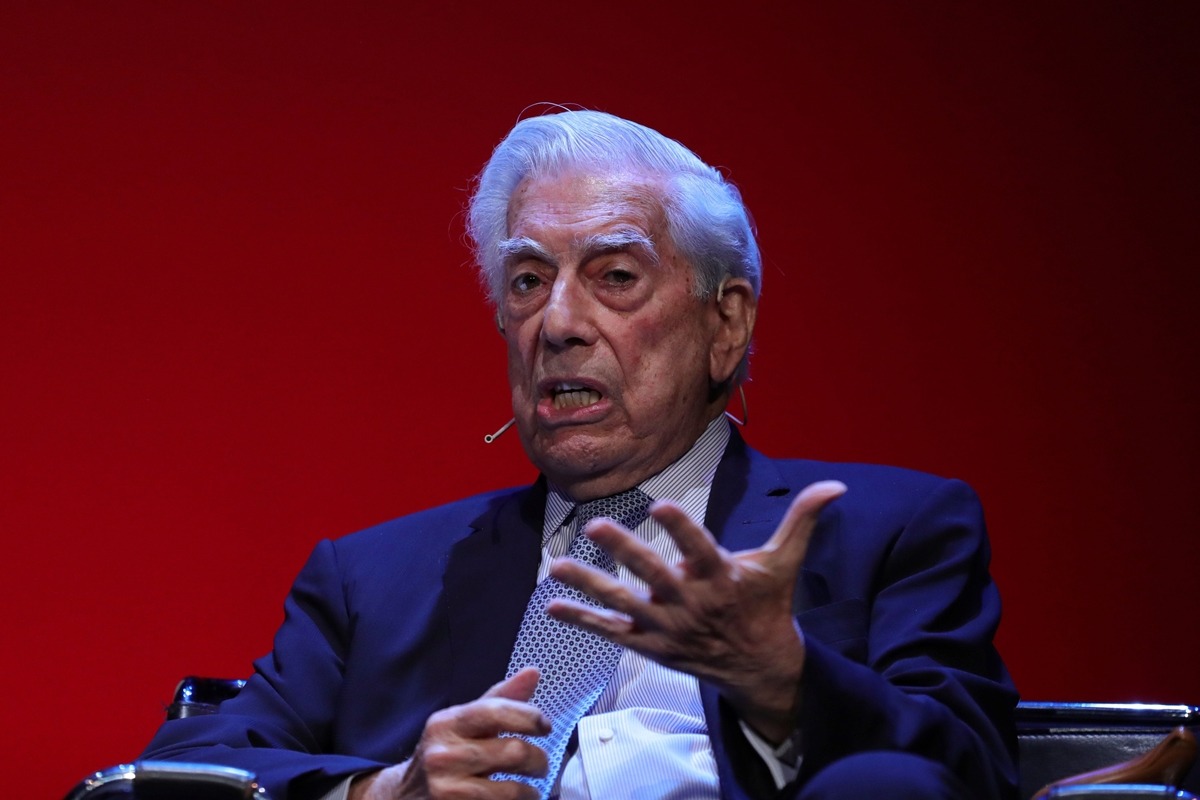 Peruvian writer Mario Vargas Llosa lamented “the blindness” shown by Venezuelans when they elected Hugo Chavez as president of the Republic in free elections.

The Nobel Prize for Literature referred to this topic in the debate “Great Challenge of Hispanic Heritage: from the black legend to narco-communism”, sponsored by Libertad y Alternativa (L&A), held in the Spanish capital, where he also participated in his capacity as president of L&A, Alejo Vidal Quadras and the former mayor of Caracas in exile, Antonio Ledezma.

At the Real Casino in Madrid, the president and editor of the newspaper The National, Miguel Henrique Otero, who is also director of the Ibero-American Commission of the L&A Forum, considered “a real challenge” to present Mario Vargas Llosa in the aforementioned debate.

“Every time he has felt called by the realities that threaten human freedoms, Vargas Llosa has said: here I am, this is my opinion, the cause of your fight for freedom is also my fight,” Otero said.

Vargas Llosa, who chairs the International Foundation for Freedom (FIL), blurted out that in the first free elections where Chávez was elected, he had many business friends who were going to vote for Chávez.

“You had to be completely blind to everything that is the history of Latin America. How are you going to vote for the commander, who the day after winning the elections is going to say that everything he said in that electoral campaign was a lie. Well, that’s how it was. Venezuelans, in a certain way, gave themselves up to Chávez, believing all the lies he told in that first electoral campaign, since there were never any more free elections”.

He was emphatic in assuring that “as long as Latin America has the fantasy that the extreme left is going to solve its problems, there is no hope. “I would have to get out of that trap, that lie and choose what they have chosen, for example, the Asian countries that today are the only ones that have truly prospered.”

And he added: «We believed that with the tragedy of Cuba the misfortunes in Latin America would end and, fatally, this has not been the case. Many countries have imitated Cuba or tried to imitate her and the prospects for development that existed in them have been ruined and destroyed.

For the Nobel Prize for Literature, without a doubt, the most unfortunate case in Latin America is that of Venezuela.

Venezuela was not a dictatorship when Commander Chavez took office, it was a democracy. Venezuelans had emerged from an endless dictatorship and were building a democratic country, a country in which there were freedoms, a country where people could progress thanks to a flourishing country economy. Venezuela is a lake of oil and a few years ago when it discovered this generous wealth that lived in its soil, it opened its borders. Let’s not forget the number of Latin Americans and also Europeans who went to Venezuela to progress.

Venezuela opened its arms to all these foreigners and many of them joined the country and have been, until the horrible year of 1998, absolutely fundamental elements in the modernization and progress of that Venezuela that was announced and that all of Latin America expected. However, a factional commander tried to carry out a coup in 1992 and the Venezuelan Army behaved in accordance with the Constitution and laws in force in the country, in a brave and even heroic manner, defeated the factious, sent Commander Chávez to jail and thus set a precedent for Latin America that there were soldiers who were against coups and who abided by the Constitution and the laws of the country. So it was not a military man who rose up against the country, he was a rebel, he was a figure that would later become popular at that time, he was unknown and the Venezuelan military acted within the law. It was not a military man, but a civilian, President Rafael Caldera who amnestied Chavez and got him out of jail and a few years later supported his candidacy.

I used to go to Venezuela very often at that time, I had many friends and I remember arriving in the middle of the electoral campaign and Commander Chávez was practically a king, his popularity was immense. Chávez visited the most powerful businessmen and, of course, promised them that he would never nationalize any company. Rather, private companies would prosper under his government, and worst of all, Venezuelan businessmen believed him. The bulk of the press was in favor of Comandante Chávez, who easily won those elections with an undisputed majority of votes. They were the last free elections in the country where Simón Bolívar was born. Free elections are important, but it is equally important that people know how to vote.

Venezuelans were wrong in electing Comandante Chávez, just as Peruvians have been wrong in the last elections by electing a president who is practically illiterate and also an illiterate who can open the doors of Peru to a second Venezuela.

Lesson we must learn. Democracy is very important, but it is also very important to vote well. Vote knowingly, not making mistakes when going to the polls. Hugo Chávez promised the gold and the Moor during his campaign, but what he fundamentally wanted was the recognition and friendship of Cuba, he wanted to be recognized as a progressive leader. There are the trips to Havana that he made, the gifts he made of oil to a country that was dying little by little. Chavez handed over the oil that Cuba consumed, he also handed over some surplus oil so that Cuba could lift its moribund economy. The communists do not know how to govern, all communist governments have failed economically.

Chavez wanted to turn Venezuela, an enormously rich country, into a communist country and the result has been what everyone knows. No country in Latin America has been economically ruined like Venezuela. Rarely has the world seen an economic disaster like that of this country that entered systematic ruin.

Venezuelans voted badly when it came to electing Chavez and now, bitterly, millions of Venezuelans have been recognizing in these years that the prosperous Venezuela of that time was becoming poorer, those who governed did not know how to govern. Venezuela produced more than three million barrels a year, currently it produces 6,00,000 barrels a day, less than a fifth of when the Chavista period began, the extreme socialist period.

The self-destruction that Venezuela has suffered has rarely been seen in the history of Latin America, the economic disaster in that country is immeasurable, not only the technicians were expelled from the company that handled oil production. The entire country entered a systematic ruin and although the official figures were hidden, foreign countries could observe what was happening because of the thousands of Venezuelans who went abroad.

The most prosperous came out first, thousands of Venezuelans who lost their businesses and stopped making money as they distanced themselves from the government and moved abroad. Then the exodus of the poor began. Never in the history of Latin America, never, never in history, have 5 or 6 million people leave a country. But the number can be higher. But how did Venezuelans, impoverished by a senseless policy that ruined Venezuela, come out into the world? They went out on foot, with their children, with their old people to the roads to start walking. A million of those Venezuelans are in Peru, a poor country, but in the eyes of the impoverished Venezuelans it could seem like salvation, food, work. How many millions of Venezuelans are there in Colombia? It is said that 2 million and may be more. Everyone has left Venezuela in absolutely miserable conditions, because the works were finished and there was nothing to replace them, the water ran out, the medicine in the hospitals, the hospitals were sheds that were not in a position to care for the sick. Above all, there was no work, it was also horribly underpaid as food prices rose to the point of putting it beyond the reach of the people, of those poor people that Commander Chávez and his successor Maduro had promised gold and money.

I think the way in which Colombia has faced the situation of the 2 million Venezuelans is admirable. Colombia is a country that has behaved beautifully, humanely and in solidarity with Venezuelans. That is why Colombia is among the eyes of Maduro, it is one of his main victims, housing the former guerrillas who signed the peace agreements and later renounced those agreements. From the Venezuelan border they are constantly attacking Colombia and with the hope that Petro wins the presidential elections and finally Venezuela can be the author of the policies that will lead Colombia to its destruction, as has been the case with Venezuela itself.

What needs to be done? What happens to Venezuela? What happens to those Venezuelan soldiers who do not rise up and rather defend the regime? The rumors that run are that the military are bought by Maduro, that they receive subsidies or that they manage a good part of the Venezuelan economy. This is the secret of the solidarity they have with the regime. Lately the situation is not good for Latin America.

We cannot ignore the case of the Mexican government that has a populist government. Its president is a populist and discreetly supports Maduro and Venezuela, he has created a third identity in Latin America that is not a perfect democracy, but neither is it a radical socialism like that of Cuba, Nicaragua and Venezuela that the Mexican president tries to stimulate talks between the Venezuelan regime and the opposition, these conversations do not lead anywhere, we must not be naive. The regime does not want elections, they know they would be defeated. They would throw Maduro out and he is not going to hand over power. We cannot fool ourselves. He is not going to hold free elections because he would be expelled.

Vargas Llosa has demanded the urgency that “the opponents do not divide more” since all the divisions between them only “favor the Maduro dictatorship.”

“The differences between the opposition will come after Maduro, but first freedom and democracy,” he said. In addition, he expressed that solidarity “is essential to confront a regime that is mounted with rows.”

He also stressed that “the union is necessary to break those countries that distance themselves from Venezuela and that, unfortunately, are not few, as if independence and reticence could be maintained against the bubonic plague that Maduro represents for Venezuela.”

“Let’s unite in support of Venezuela and ask the representatives of the opposition to be united,” he said convinced.

Independent journalism needs the support of its readers to continue and ensure that the uncomfortable news they don’t want you to read remains within your reach. Today, with your support, we will continue to work hard for censorship-free journalism!

Mario Vargas Llosa: “The most tragic case in Latin America is that of Venezuela”