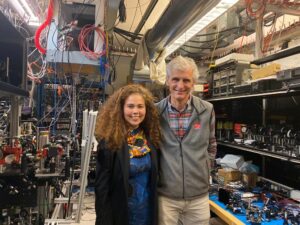 Considering this note from the Ministry of Science of Colombia, whose vice minister is Dra. Yesenia Olaya Requene from Tumaco, extremely important, we transcribe the news below:

«In order to expand bilateral development in the field of Science, Technology and Innovation (CTeI), the Vice Minister of Talent and Social Appropriation of Knowledge of Minciencias, Dr. Yesenia Olaya Requene, led a joint work agenda with leading scientists from Harvard University and the Massachusetts Institute of Technology (MIT) in the United States.

“We met with Dr. Wolfgang Ketterle, 2001 Nobel Prize in Physics, Associate Director of MIT’s Research Laboratory of Electronics (RLE), and director of RLE’s affiliated Center for Ultracold Atoms (CUA), to coordinate capital formation with Minciencias advanced human from Colombians in his laboratory. With this, we have agreed to articulate actions in 2023 to strengthen the scientific vocations of girls, boys, and young people belonging to Afro-descendant, indigenous, and peasant communities in the cutting-edge laboratories of MIT and Harvard,” said Vice Minister Olaya.

For his part, and within the framework of the visit, the Nobel Prize in Physics (2001), Dr. Wolfgang Ketterle, expressed that: “it is a great challenge for us at MIT and for Minciencias to educate children and girls in areas of STEM (Science, Technology, Engineering and Mathematics, for its acronym in English), from underrepresented communities in Colombia”. He added that “we recognize the efforts of the vice minister, Yesenia Olaya, in creating an environment of inclusiveness and equity for the younger generations, which in the long term will increase our ability to propose solutions for the benefit of the country’s progress.”

On behalf of Minciencias, the vice minister attended the second Continental Meeting on Afro-Latin American Studies, organized by the Afro-Latin American Research Institute (ALARI) of Harvard University; a space for dialogue and exchange that brought together more than 250 experts such as academics, intellectuals, activists, and public officials from Latin America, the United States, and Europe.

“This meeting allowed us to reflect and exchange experiences on the progress of policies and initiatives for the eradication of racism in Latin America, and to advance in the democratization of the field of Afro-Latin American studies; as well as in science, technology and innovation initiatives for the development of Afro-descendant peoples”, added the vice minister.

Olaya also participated in the launch of the Consortium of Universities, led by ALARI and Latin American Universities, for the offer of Postdoctoral Stays in Colombia, the United States, Brazil, Argentina and Mexico, which seeks to facilitate the linking of Latin American professionals. Additionally, a strategy was established with the Colombian Consulate in Boston, led by the Vice Minister of Higher Education, Aurora Vergara, to support the coordination of actions that contribute to access to higher education for Colombian families in the State of Massachusetts.

Visit to the Massachusetts Institute of Technology (MIT)

At the Massachusetts Institute of Technology (MIT), Vice Minister Olaya held various meetings with actors from the region’s Science, Technology and Innovation System, as well as leading scientists and businessmen in STEM areas, willing to coordinate transfer efforts technology to Colombia from the United States.

Dr. Ronald Fernando García Ruiz, a Colombian scientist at MIT and winner of the American Physical Society (APS) Stuart Jay Freedman Prize in Nuclear Physics, said: “It will be a pleasure to receive more Colombian students at my laboratory, not only because they are Colombian, but because they are very good”.

The vice minister expressed: “the Colombian scientific diaspora abroad is an important axis to connect Colombia with the global productive sector, promoting the growth of technology-based companies in Colombia. I will work to more directly connect the link between the diaspora and the CTeI system in Colombia”.

To strengthen and take concrete steps after the agreement signed between Minciencias and Mineducation, Dr. Olaya requested the accompaniment of the Vice Minister of Higher Education, Dr. Aurora Vergara, to the meeting with the Nobel Prize winner, Dr. Ketterle, Dr. Susanne Yellin and the Colombian scientist, Dr. Edwin-Pedrozo Peñafiel.

Minciencias strengthens cooperative relations with Harvard University and the Massachusetts Institute of Technology. | Blog The Spectator