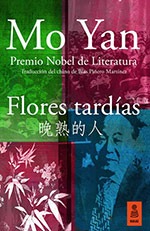 The Kailas publishing house publishes “Late Flowers”, the last work of the Chinese writer Mo Yan after receiving the Nobel Prize for Literature.

10 years ago, the Swedish Academy awarded the writer moyan with the highest distinction of international letters. Surely he was one of the most controversial but at the same time most deserving winners of the award. The judges could not resist his apparently simple prose loaded with profanity, which delves into controversial issues from a somewhat scatological perspective; For them, his ability to combine “hallucinatory realism with the traditional story, the historical and the contemporary”, make him an unavoidable author. Blas Pinerohis translator into Spanish, acknowledges that he is one of the most deserved winners of recent times, but warns the reader that his prose is too crude: “I don’t think Mo Yan is an author for all audiences”,

There are already books as valuable as The Red Sorghum Clan, The ordeal of the scent of sandalwoodeitherFrog. Recently, Editorial Kailas has published late flowers, a work that came to light in 2020 and now arrives in our country, the first written by the Chinese author after receiving the Nobel Prize. This last book is made up of several personal stories of the author in different vital stages of his life, giving special importance to his childhood and adolescence, “moments of learning, in which he does not judge, he only observes and is guided by his relatives” . Blas Piñero defines it as “a synthesis of Mo Yan’s work”.

Mo Yan, which translates as “don’t speak”, was born in Gaomi, now a small town in Shandong province, in 1955. His childhood and adolescence were harsh, marked by hardship and social stigma. Under Mao Zedong, those who once owned land automatically became outcasts, reactionaries, and enemies of the people. Mo Yan’s father, before the communists came to power, owned a small piece of land. The ‘stain’ was inherited by the children and in Mo’s case, like that of so many others, he bore the blame for something that not even his parent was guilty of. His situation prevented him from going to school and training, but that was not an obstacle for the young Mo Yan who found in the People’s Liberation Army a way out of the exhausting rural life and an encouragement to dedicate himself to literature.

Although it may seem ironic given the current confrontation between China and the United States, without the translations of the prestigious Howard Goldblatt and the pressures of a group of American intellectuals, “Mo Yan would not have obtained the Nobel Prize”. And that he “has never stopped writing for Chinese”. In any case, “Mo Yan has that wonderful quality that only a few writers manage to develop in his work and that is the ability to turn local issues into universal paradigms.”

In Mo Yan, especially in late flowers, a forceful criticism of modernity and the search for wealth can be seen: “This exacerbated desire for material possessions forces people to leave their provinces and abandon their homes, increasing, on the one hand, the already deep gap between people who lives in the countryside and the one who lives in the city, and, on the other hand, undermining the tradition and the Chinese cultural substratum that is diluted in the circuits of modernity”. Mo Yan longs for the old social ties, destroyed by the communists, which were built on the basis of Yin Yang and they brought harmony and order to the Chinese idiosyncrasy. “Although it may not seem like it, Mo Yan is a reactionary, anti-cosmopolitan and anti-modern.”

This attitude finds its best ally in vulgarity: “In China, its lack of filter is criticized, not in the ideological sense, but in the use of language, very scatological, carnivalesque and baroque, with an unbearable crudeness for some people. Even so, behind the vulgarity of the language lies a cultural level that very few authors can reach.

“We cannot forget that Mo Yan belongs to the people and in his work he transmits that way of thinking and speaking that is so typical of rural people.” The author’s writing reminds Blas of the Spanish picaresque, “vulgar in its form but deeply critical in its content.” That carnivalesque aspect with great polyphonic touches is his way of transgressing and breaking with social canons: “He doesn’t want to know anything about civil servants or the cultural elite, his language is a tool to laugh at them.”

Within the cacophony of voices that stand out in the works of Mo Yan, we find the “quarrelsome”. “At first glance, Mo Yan’s cousin seems to break with the scheme of distributive justice raised throughout the novel, but in reality he is a fighter, someone who is guided by the ethics of combat and the value of martial artists. ; his efforts to survive, in the end, are well rewarded.” In late flowers, Mo Yan explores the importance of individual and collective responsibility within a social order and how actions will be rewarded positively or negatively depending on how people act. “An attempt to seek justice is appreciated when no institution is capable of maintaining order.”

His joining the CCP exacerbates diatribes on both sides of the political spectrum: for certain groups critical of the establishment a communist, Mo Yan is part of the string of henchmen of the single party that tries with his work to indoctrinate his readers; while for some fellow politicians, his judgments are irritating. “Does it seem uncritical to you to call the official positions of the party ignorant? Mo Yan portrays them as people who do not know anything, they come to the countryside with their revolutionary and abstract ideas, but in reality they do not understand the peasants, nor do they defend them or give them a voice”, says Blas.

Even with everything, Blas denies that Mo Yan’s work is politicized, if we understand politicization as an ideological defense: “Mo Yan teaches us that all ideology ends up failing because it is incapable of encompassing the complexity of the real world.” Blas reminds us that in The landowner’s gazeone of the stories collected in late flowers, Mo Yan feels sorry for the death of the ‘landlord devil’, does not meet the social and political demands, can not hate him. He shows great empathy and humility and with his act questions any ideology. “For Mo Yan, the lack of understanding towards other people is the cause of our current complicated situation.”

For a while, this stance had dire consequences for the author. However, the international success of The Red Sorghum Clan, both literary and filmic, covered his back from the attacks of his compatriots. “The book and the film opened the doors of the West to Chinese culture, at a sweet moment for both, since there was great curiosity to know the country where the factories were relocating and the Chinese wanted to know everything possible about that group of countries. distant people who invested in its flourishing financial system”. But what definitely protected him from any attack was the grant of the Nobel Prize: “In China it was known, but it didn’t sell as much; On the other hand, other better-known authors within the country, at an international level, nobody knows them”.

His rural origin increases his marginal aura: “People from the countryside are considered second-class citizens, communism has not been able to definitively end the rural-city dichotomy.” This condition, added to his literary success, has aroused the envy of his fellow writers, who do not forgive that such achievements come from a peasant without formal training: “For this reason, a revengeful facet can be seen in Mo Yan’s work. , nor can he support his colleagues who write for money”, concludes Blas Piñero.

Mo Yan, the peasant who won the Nobel Prize for Literature – Librujula