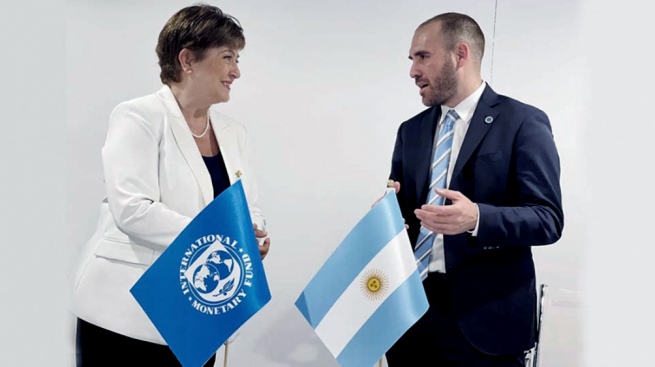 Argentina’s approach to the IMF to reschedule its debt payments while adopting a progressive fiscal path that protects growth resonates in a world where voices are added in support of this type of argument, a debate reinforced by the need to sustain the economic recovery after the pandemic and that since 2021 found in those positions Pope Francis, US congressmen and Nobel Prize winner Joseph Stiglitz.

The most recent pronouncements, which include some of these opinions, promote that the international financial organizations review their traditional demands for deficit reduction to protect the level of activity, or urge make surcharges more flexible, the differential interest rates that entities such as the IMF apply to the most indebted countries, with Argentina as one of the emblematic cases.

With the country in the defining stretch of the arm wrestling match with the Fund, this week the letter that Francis sent in April to the participants of the spring meetings (in the northern hemisphere) of the IMF and the World Bank, in which he expressed his wish that the internal debates of these institutions would contribute to developing “a recovery model capable of generating new, more inclusive and sustainable solutions to support the real economy”.

In another representative paragraph of that document, the Pontiff stated that the reduction of the debt load in the poorest nations would be “a profoundly human gesture that can help people to develop, to have access to vaccines, to health , to education and employment”, the same paradigm that underlies Stiglitz’s last intervention in the public debate, which he dedicated not coincidentally to Argentina.

In a column published last Monday,the US economist asked the IMF not to “reverse course” of the country “with outdated austerity requirements” and warned that the consequences of forcing Argentina to make a fiscal adjustment to reduce the deficit with a shock cut “would be serious” even for the Fund itself, referring to the pending renegotiation of the US$45 billion debt with the organism.

These positions were added to the request for relief in the surcharges that fifteen congressmen of the Democratic Party headed by the New Yorker Alexandria Ocasio-Cortez addressed by letter to the Secretary of the Treasury of the United States, Janet Yellen, and they were read with special interest in Argentina, with the Government of the Frente de Todos urged by the schedule of maturities with the IMF and the negotiations at a time of certain tension.

The succession of propositions calling for temporary relaxation of the precepts of immediate deficit reduction for emerging and indebted countries was taken as a implicit support by those who support, such as the vice president of Parlasur Oscar Laborde (FdT), that due to the pandemic the Fund “has to review that drastic position that it has always taken and that conditions the countries.”

“The letter from Pope Francis to the IMF asking him to reduce the debt of poor countries is important for the negotiation, but also because of the criteria defended by our Government, which has been expanding. Already the G-24 forum, which brings together developing countries, had expressed that the IMF cannot work with surcharges and that special drawing rights (SDR) should not be symmetrical to the percentage that each country has in the organization,” Laborde told Télam.

The Mercosur parliamentarian recalled that this proposal on SDRs was approved at the meeting of ministers and presidents of Central Banks of the G-20 which met during the October summit of that forum in Rome, where the Fund was also asked to review its surcharge policy, although the agency’s board, in which the US is the majority shareholder, did not echo those requests.

“The letter from the congressmen to the US Treasury Secretary for the reduction of rates and what Stiglitz himself said, with the idea that countries that make an effort to develop cannot continue to be harassed, as well as the letter from the Papa, they are sowing a general opinion that the Fund cannot continue to operate under the same conditions,” Laborde assessed in statements to this agency.

Such international pronouncements open up some degree of expectation, but with realism and without excessive illusions, among those who share the current position of Argentina in the negotiation for the emergency rescue that the Fund granted in 2018 to the management of Mauricio Macri, in the sense that The country needs to sustain economic growth in 2021 after the effects of the 2020 pandemic (GDP plummeted 9.9%, according to Indec).

That thesis, which consists of the search for fiscal balance being progressive enough to allow the continuity of some state stimulus policies, is what they defend. economists such as Hernán Letcher and Agustín D’Atellis, who in dialogue with Télam recalled that before the outbreak of the coronavirus “all the countries made fiscal policy (of expansion of spending) and they did it in a very pronounced way.”

“The world is discussing how to get out of the pandemic and these debates find Argentina once again in the focus of witness cases: just as it did the largest removal in history at the time and then went to the United Nations to promote a new order for debt restructuring, now the problem is the record indebtedness left by Macri,” Letcher described by way of context.

For Letcher, the statements by Ocasio-Cortez or Stiglitz expose the topicality of the debate on the pandemic and fiscal policy, a planetary discussion that -he marked- includes paradoxes such as “the Fund issuing special drawing rights, the SDRs, and distributing them throughout and across the world, so that countries can use it to address the problem of the pandemic, and Argentina, due to its situation, had to use its SDRs to pay the IMF itself”.

“That is a contradiction, because if you want to help me, let me use the SDRs to reactivate the economy,” observed the head of the Argentine Political Economy Center (Cepa), and gave this situation as an example to conclude that “beyond the discursive, the Fund is still the same Fund, it asks you for the same things and requires you in the same way, for which cannot be expected to revise its historical practices”.

A similar perception was outlined by D’Attelis, who stated that he was “completely in agreement” with “the different voices, both from politics and world-renowned economists, or the same from the Vatican, who propose moving towards a more humanistic economic policy than address the impact of the pandemic”, although he warned that he “is a little skeptical” about the possibility that “this turnaround will occur worldwide”.

“Unfortunately I have to be pragmatic and I must say that these pronouncements remind me a lot of the post-international financial crisis of 2008/2009, when the world began to discuss again the rules of the supposed new international financial architecture, the role of the organizations, the power that emerging countries and the IMF itself were going to have was under discussion, but the truth is that everything came to nothing,” D’Attelis reviewed in dialogue with Télam.

For Argentina, the debate on the advisability of injecting funds with countercyclical measures, which coincides with a rise in inflation throughout the world, has an impact on the final stretch of the tense negotiation with the Fund, just when it has just been installed in the country the new permanent representative of the organization, the British Ben Kelmanson.