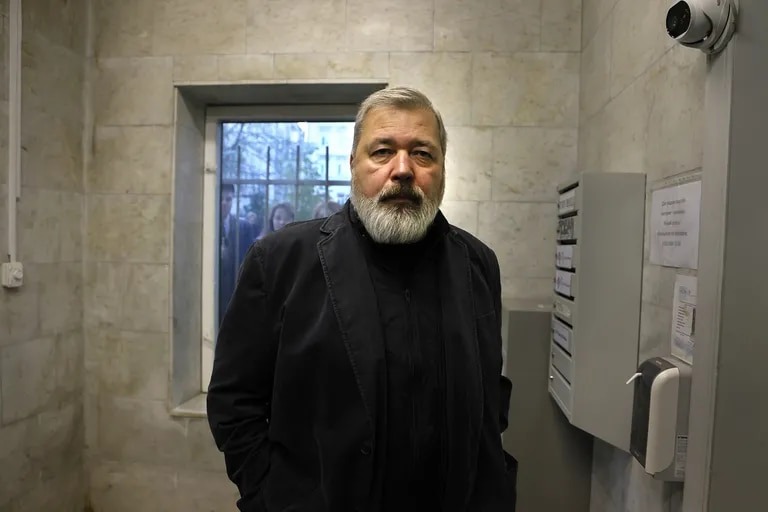 Minutes after the Russian president Vladimir Putin launched its war against Ukraine, the winner of the Nobel Peace Prize in 2021 and editor of the Russian independent daily Novaya Gazeta, Dmitry Muratov, called an emergency meeting. “We are in mourning,” she announced in a video after the meeting at the Moscow newsroom. “Our country, on the orders of President Putin, has declared war on Ukraine and there is no one who can stop it. So in addition to the mourning, we carry the shame.”

Muratov channeled the agony in his newsroom into defiance. “Russia bombs Ukraine”, he headlined it in huge letters on the cover of the next edition of the newspaper, with the notes published in a bilingual format, in Russian and Ukrainian. “We do not recognize Ukraine as the enemy or Ukrainian as the language of the enemy,” Muratov says in the video. “And we never will.”

“Muratov has faced the same dilemma as those who dared to look despotism in the eye: cling to the purity of ideals, and therefore close the newspaper, or continue to press within the constraints of a repressive system and thus maintain long live the publication

A month later, that newspaper headline would be illegal. And Muratov is the last man standing between Putin and the independent media in Russia. At 60, he is a staunch supporter of Russian journalism and has been piloting the Novaya Gazeta for decades, which included heartbreaking moments, such as the murder of its own journalists. And now that his country has definitively veered towards totalitarianism, he faces the possible death of Russian journalism itself.

Along the way, Muratov has faced the same dilemma as those who dared to look despotism in the eye: cling to the purity of ideals, and thus close the paper, or continue to press within the constraints of a repressive system. and thus keep the publication alive.

He opted for the latter. While thousands of journalists fled Russia, Muratov remains in Moscow and publishes the Novaya Gazeta three times per week. But the newspaper must abide by the new censorship law passed on March 4, which punishes publication of what Russia calls “fake news” about the country’s military actions with up to 15 years in prison. Among other things, this implies that the Russian media cannot say that the war is a war: they must call it a “special military operation”.

Technically, the Novaya Gazeta complies with the new Russian law, but that doesn’t mean it has kept its head down: it continues to rely on visual accounts, first-hand accounts, blatant omissions, and understatements to convey the horrors of war to literate Russian readers between lines.

“Look, I’m not going to shoot myself in the foot and walk away from this battle for information,” Muratov says in a telephone interview from Moscow. “When the government wants to shut us down, it is going to do it. But I am not going to be the one to turn off the lights, contradicting the will of our journalists and readers.”

For much of modern Russian history, press freedom has been the exception. But in the 1980s, the Soviet leader’s “thaw” policy Mikhail Gorbachev It created an opening for critical journalism that was consolidated after the fall of the Soviet Union in 1991.

In 1993, Muratov and a group of journalists broke away from Komsomolskaya Pravda, then the official organ of the Communist Party’s youth league, and founded Novaya Gazeta. The journalists had to put up money from their own pockets and received help from Gorbachev, who gave them part of his Nobel Peace Prize money to buy the new newsroom’s computers.

At that time, it seemed that freedom of the press had come to Russia irrevocably. At the end of 1993, the Russians voted in favor of a new Constitution, which clearly specified, as it still does today, that “freedom of the media is guaranteed; censorship is prohibited.”

The Do not go it became the go-to publication for Russia’s progressive intelligentsia. But in the following decade, as Putin took control to build his propaganda machine, the Novaya came under pressure: between 2000 and 2009, six people from the newspaper’s team were murdered or mysteriously turned up dead, including the star journalist Anna Politkovskaya, shot to death in the elevator of her building in 2006.

By December 2021, when Muratov arrived in Oslo to receive the Nobel Peace Prize – along with co-winner Philippine journalist Maria Resa– the independent media in Russia were already in intensive care. Putin officials had labeled many of the country’s top journalists “foreign agents,” forcing them into exile.

In his Nobel acceptance speech, Muratov warned that the Russian government was stirring up a climate of war, and said that journalists would continue to fulfill their mission of bearing witness to the facts. “While governments keep trying to improve the past, we journalists try to improve the future.”

In these days, Muratov announced that he and his newspaper had decided to auction the Nobel medal and give the proceeds to Ukrainian refugees.

When Putin invaded Ukraine, the reporters and editors of the Novaya Gazeta They had already had a serious conversation about what the paper’s response would be and about the difficulties of working in wartime conditions. “You can’t continue living the same as before if your country’s planes and artillery are demolishing the cities of a neighboring country,” says Muratov.

Within two days, Russia’s communications regulator, the Rozkomnadzor, threatened to block the output of Novaya Gazeta and demanded the removal of “false information about the shelling of Ukrainian cities and the deaths of Ukrainian civilians as a result of the activities of the Russian army”. Muratov replied that he would continue to trust the correspondents’ reports of him. Later, in an interview with The New Yorker magazine, Muratov said: “We respect the sovereignty of Ukraine… and also the sovereignty of the Novaya Gazeta”.

State pressure was increasing. The authorities blocked Facebook and took the Echo of Moscow radio station offline. Police arrested thousands of protesters across the country. Novaya’s coverage documented that hundreds of Russians had been fired from their jobs for expressing opposition to the war. On March 4, Putin enacted the new law on “fake” news. The independent channel TV Rain stopped broadcasting and hundreds more journalists fled the country.

The newspaper called another emergency meeting, where they evaluated two possible courses of action. “The first option was to close, because it is impossible to work under wartime censorship, and we would expose many of our collaborators to criminal prosecution, since the government is capable of declaring any news ‘false,’” says Muratov.

“The second option was to write a disclaimer to explain to readers that we were still working because there is very important information to communicate, but that we were doing it under conditions of war, and that we had no choice but to censor ourselves.”

Muratov decided to put the two options up for consideration by supporters of the newspaper’s crowdfunding platform, a group of loyal readers the paper calls its “accomplices,” and conducted a poll. Of the 7,800 responses, 96% wanted the newspaper to remain open. The newsroom received 3,500 letters in 24 hours, all asking that the paper not close.

Days later, the newspaper published its first edition under the new rules. The cover headline read: “This edition of the Do not go it conforms to all the laws of the reformed criminal code of Russia.” Underneath was an image of four ballerinas performing Swan Lake in front of a giant mushroom cloud. The message was clear: during the 1991 coup attempt against Gorbachev, Russian state television broadcast Swan Lake, and ever since, for Russians, that ballet is synonymous with a crisis that the government wants to hide.

“Hello everyone, this is the online information service of the Novaya Gazeta! We promised to learn to live and write under the clutches of military censorship and here we are. We are back!” Nikita Kondratyev, head of the service, wrote on March 16. “Yes, Russian journalism is having its last teeth pulled,” he wrote. “But it has the wonderful ability to grow new teeth.”

Muratov, the Nobel Prize winner who fights to keep the truth alive in Russia