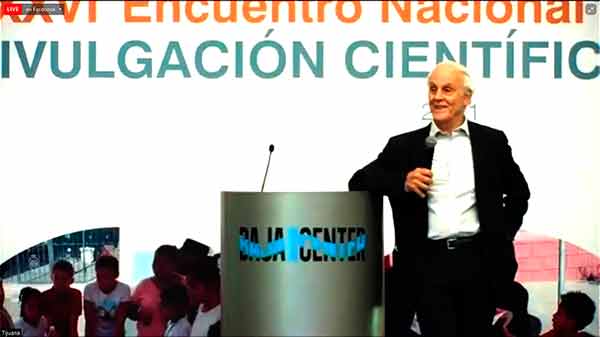 It is time to develop a theory that goes beyond Einstein’s ideas and allows gravity to be integrated into the standard model of particles, said the winner of the 2004 Nobel Prize in Physics, David J. Gross.

To achieve this, renewed ideas are mainly needed to facilitate the comprehensive development of models to establish how the Universe works, what energy and dark matter are, or to specify the creation of a quantum computer, he said.

When offering the keynote address “Frontiers of Fundamental Physics”, during the meeting of the Mexican Society of Physics and the National Meeting of Scientific Dissemination, he detailed that so far Einstein’s theories have been successful because they predict important events such as deformations in the space-time or the behavior of objects such as black holes. However, when gravity is reviewed at a quantum level, the space-time fluctuations become uncontrollable.

“It is clear that we need a modification to Einstein’s theory. People may say: we have spent years testing the validity of your theories. But options have already begun to be visualized, such as superstring theory, which as one of its most important contributions is that it has begun to challenge and offer an alternative point of view to space and time ”, specified the scientist to whom Ana María Cetto Kramis, researcher at UNAM and president of the Mexican Physical Society, welcomed him.

David Gross discovered asymptotic freedom, this allowed him to formulate the theory of the strong nuclear force that completed the Standard Model, which details the three basic forces of Particle Physics: electromagnetic, weak and strong. For this work he was awarded the 2004 Nobel Prize in Physics, along with Frank Wilczek and David Politzer of Caltech.

The expert, whose work led to the discovery of the forces that act within the atomic nucleus, explained that basic questions such as: what was there before our Universe or how it will end, remain unanswered.

He said he was surprised by what humanity has learned in the last 50 years: in Physics the basic building blocks that make up matter and the way in which they act among them have been discovered and understood; the Universe has been mapped and its history reconstructed; you have an understanding and control of matter in its phases on the nanometric scale of atoms.

In his view, the most important driver of knowledge is ignorance, which prompts you to ask questions that can be answered with observation and experimentation. What is known is little, and science is to offer answers.

There are many problems that still generate numerous frontier questions in Physics, such as cosmology, black holes, quantum matter, quantum computation or string theory about space-time, commented who has been director of the Kavli Institute of Theoretical Physics.

As an example, Gross questioned how far back we can go in time; In its origins, the cosmos was so homogeneous, it was that gas and from what or how stars, dust and what makes up the Universe begin to develop, how galaxies evolve, and so on.

“More importantly, we have no idea how that started. bang. Answering that question is the most difficult of all, be it science, Philosophy or whatever you like. Physics for a long time has taken up the challenge of explaining the beginning, it has tried to know how far back in time we can see, we do not know what was the original condition that gave rise to the Universe, but we treat it ”, highlighted the researcher.

In theory, he added, the cosmology model works to know how much mass there is, how much we can see, but it has discovered that there is a large amount of matter that is invisible and is called dark matter.

In addition, astronomers have worked on the expansion and acceleration levels of the cosmos, especially with Einstein’s theory of the cosmological constant, added the researcher from the University of California at Santa Barbara.

Gross reflected: “Computers are extraordinary, but until now I have not known that anyone gets curiosity from a computer, they follow orders. There is no idea how to motivate a computer to explore, but we can do it. Computers have enabled important simulations for theoretical sciences, or ways to do a real experiment, we can make better computers to revolutionize the way people do science. ”