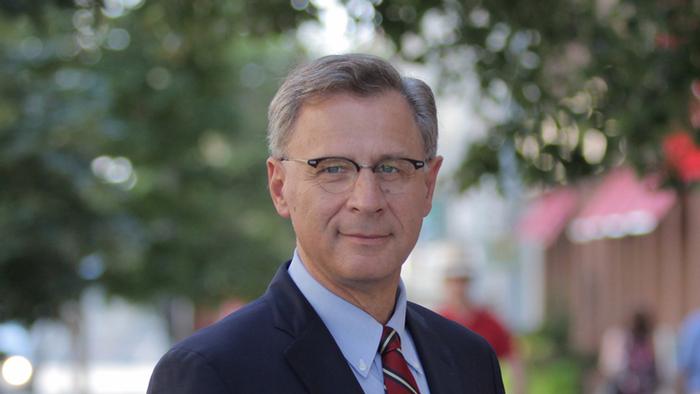 With the decision of the 2022 Nobel Peace Prize, a message is sent to public opinion in Russia, Belarus and Ukraine; moreover, to the whole world: we distinguish those who, in Eastern Europe, have the courage to name by name the monstrous crimes of the Vladimir Putin regime. We distinguish those who are willing to suffer for the truth, to risk their lives, to be imprisoned.

The prestigious award will hurt Putin, because it will go down in the history books. The tyrant of Russia and his state propaganda will be able to hide it, argue against it and criticize it as much as they want. However, they will not be able to erase this good and wise decision of the Nobel Peace Prize Committee.

The crimes perpetrated by Putin did not fall from the sky: neither the invasion war in Ukraine nor the persecution of the opposition in Russia and Belarus. Putin has systematically prepared them for years.

In Belarus, Ales Bialiatski, one of the three Nobel Peace Prize laureates, started calling them by name long ago. For example, Moscow’s attempt to destroy Belarusian sovereignty. For decades he has been fighting in defense of the Belarusian language and culture, something that provokes the outrage of Moscow.

Several times the self-appointed President Lukashenko had him imprisoned, allegedly for tax crimes. The accusations had always been fabricated. In reality, Bialiatski was punished for documenting how his country’s security forces torture and imprison opponents. He interceded on behalf of protesters who spoke out against the rigged elections, and in 2021, he was once again sentenced to prison. The Nobel Peace Prize will be responsible for drawing attention to the fate of him and his homeland.

The Center for Civil Liberties in Ukraine is also dedicated to documenting crimes. In recent times, the organization has been noted for documenting the crimes of the invading Russian troops in Ukraine. He hopes that the abuses will not go unpunished. For this, it is necessary to secure evidence, name the victims. Already in the past, the Center had advocated for kyiv to become Europe-oriented and for strengthening Ukrainian civil society.

“Memorial”, an example for many NGOs

Of the three laureates, the human rights organization Memorial is the best known. Already in the 80s of the last century, he began to tackle the darkest chapters of Soviet history. One of his best-known collaborators was Andrei Sakharov. For a long time, President Putin persecuted this organization, which served as an example for many NGOs worldwide.

As early as 2003, during his first presidential term, he demanded that history books arouse the pride of students. Memorial, which documented in detail the millions of crimes committed by the communist regime, foiled his plans.

Likewise, as in the times of the Soviet Union, the NGO again began to intercede in favor of free elections and persecuted opponents. At the end of last year, Putin banned Memorial.

In the early 1990s, Memorial’s work had a real impact on Duma legislation at the time. After the fall of the Soviet Union, the NGO wanted to prevent an authoritarian leader from ever ruling the country again. Hence, he proposed, following the example of the Nuremberg Trials, to bring the perpetrators of the crimes, both from the Communist Party and from the security forces, to court.

This initiative unfortunately failed, because, at that time, the communists had already distanced themselves from crimes in Soviet times. Had Memorial prevailed back then, Putin might never have come to power.

'' We are going to win the battle for the truth '': Nobel Peace Prize
Luck does not exist: we must learn to decide
Star Wars or why galaxies collide
Tweet
Share
Share
Pin
Other links: https://awardworld.net/resources/