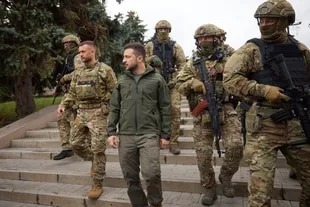 The Nobel prize season This year’s award kicked off as Russia’s invasion of Ukraine shattered decades of nearly uninterrupted peace in Europe and heightened the risks of nuclear disaster, a context that may determine who will receive the award in the category of peace.

The secretive Nobel Prize committees never hint at who will win prizes in medicine, physics, chemistry, literature, economics, or peace. However, there is no shortage of pressing causes that deserve the attention that comes with winning the world’s most prestigious award: the wars in Ukraine and Ethiopia, the interruptions in energy and food supplies, the increase in inequality, the climate crisis, the consequences of the Covid-19 pandemic.

Members of the European Parliament called for Ukrainian President Volodimir Zelensky and the people of Ukraine to be recognized this year by the Nobel Peace Prize committee for his resistance to the Russian invasion.

Although that desire is understandable, that option is unlikely because the Nobel committee has a history of honoring figures who end conflicts, not war leaderssaid Dan Smith, director of the Stockholm International Peace Research Institute.

The Ethiopian Prime Minister, Abey Ahmed, won in 2019 for achieving peace with neighboring Eritrea. A year later, a largely ethnic conflict broke out in the Tigray region of the country. Some accuse Abiy of stoking tensions, which have led to widespread atrocities. Critics have called for his Nobel Prize to be revoked, and the Nobel committee has issued a rare warning against him.

Myanmar activist Aung San Suu Kyi he won in 1991 because of his opposition to the military regime, but decades later he is considered to have failed to oppose the atrocities committed against the largely Muslim Rohingya minority.

In some years no peace prize has been awarded. He put them on hiatus during World War I, except to honor the International Committee of the Red Cross in 1917. He did not deliver any from 1939 to 1943 due to World War II. In 1948, the year Gandhi died, the Norwegian Nobel Committee did not award a prize, citing the lack of a suitable living candidate.

The peace prize also does not always confer protection. Last year, journalists Maria Resafrom the Philippines, and Dmitry Muratov, from Russia, were awarded “for their courageous fight for freedom of expression” against authoritarian governments. Following the invasion of Ukraine, the Kremlin has further cracked down on independent media, including Novaya Gazetathe best-known independent newspaper in Russia. Muratov himself was assaulted on a Russian train by an assailant who sprayed him with red paint, injuring his eyes..

Pope Francis, climate activist Greta Thunberg, British presenter David Attenborough, the World Health Organization (WHO) and Belarusian dissident Sviatlana Tsikhanouskayaare another of this year’s Nobel Peace Prize nominees, after receiving the backing of Norwegian lawmakers, who have a history of picking the winner.

Among the candidates for the award are also: the Government of National Unity of Myanmar -formed by opponents of last year’s coup-, and the Minister of Foreign Affairs of Tuvalu, Simon Kofe.

Norwegian lawmakers have nominated a prospective Peace laureate every year since 2014 (with the exception of 2019), including one of last year’s two laureates, Maria Ressa.

The literature award, meanwhile, has been notoriously unpredictable. Few had bet on last year’s winner, the Zanzibar-born, UK-based writer Abdulrazak Gurnah, whose books explore the personal and social impact of colonialism and migration.

Gurnah is only the sixth Nobel Prize winner for literature born in Africa, and the award has long been criticized for being too focused on European and North American writers. It is also dominated by men, as there are only 16 women among its 118 laureates.

A clear contender is Salman Rushdiethe Indian-born writer and free speech advocate who spent years in hiding after Iran’s clerical rulers called for his death over his 1988 novel Satanic Verses. Rushdie, 75, was stabbed and seriously injured in August at a festival in upstate New York.

The list of potential winners includes literary giants from around the world: The Kenyan writer Ngugi Wa Thiong’o, the Japanese Haruki Murakami, the Norwegian Jon Fosse, the Antioquian Jamaica Kincaid and the French Annie Ernaux.

The awards to Gurnah, in 2021, and to the American poet Louise Glück, in 2020, have helped the literature prize overcome years of controversy and scandal.

In 2018, the award was postponed after allegations of sexual abuse rocked the Swedish Academy, which appoints the committee for the Nobel Prize for Literature, and caused an exodus of members. The academy was renovated but faced further criticism for giving the 2019 literature award to the Austrian Peter Handke, who has been described as an apologist for Serbian war crimes.

The Nobel announcements began Monday with the prize for physiology or medicine, followed by physics on Tuesday, chemistry on Wednesday and literature on Thursday. The 2022 Nobel Peace Prize will be announced on October 7 at 11 (6 from Argentina) and the Economy on October 10.

The prizes are endowed with 10 million Swedish kronor (nearly $900,000) and will be delivered on December 10.

Nobel Peace Prize: the main candidates for this year’s delivery