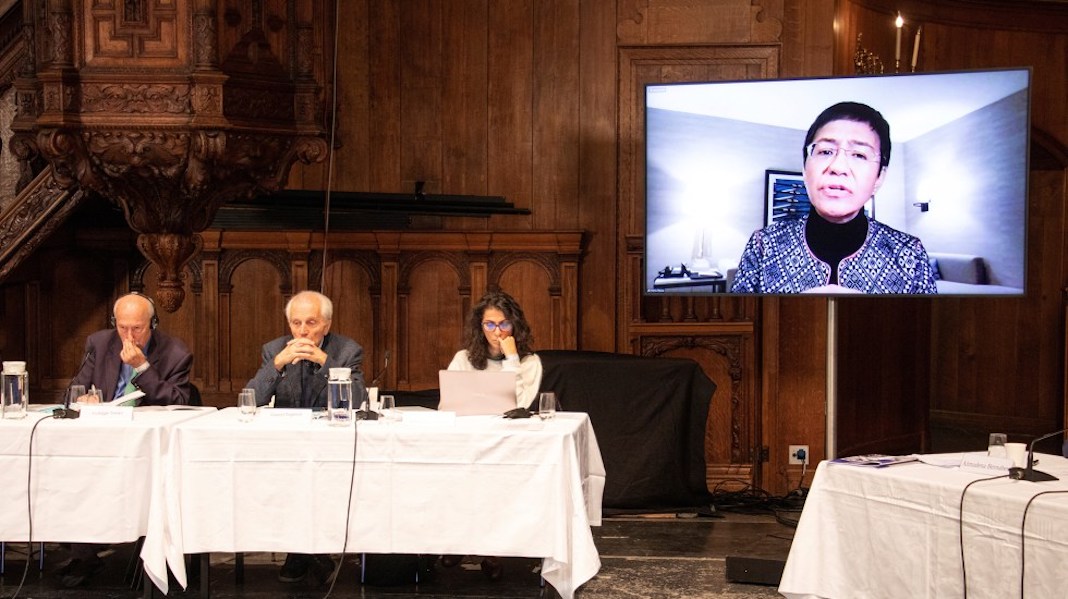 The People’s Court for Murdered Journalists (TPPA) was inaugurated with the testimony of the Philippine Maria Ressa, winner of the 2021 Nobel Peace Prize, who warned of the radicalization caused by the algorithms of social networks.

“Social networks have become a behavior modification system and users are treated in these online experiments like Pavlov’s dogs,” said Ressa, who participated in the TPPA by videoconference.

The Nobel Peace Prize winner assured that the “friends of friends” system, used in networks such as Facebook or Twitter to recommend accounts, is in line “with the polarizing leadership style of ‘us against them’”, used by figures such as the President of the Philippines, Rodrigo Duterte, or the former President of the United States, Donald Trump.

Other elements that cause the radicalization of society are the news channels of those same social networks, said the journalist.

“They destroy the public sphere and allow these bubbles to create their, as a White House spokeswoman put it, alternative facts. When you have that micro-targeting system, it is exploited by power to insidiously manipulate people in a democracy, ”Ressa said.

The Nobel Peace Prize winner responded in this way to the questions of the Spanish lawyer Almudena Bernabéu, who served as attorney general of the TPPA, a symbolic court created to raise awareness about violence against journalists.

It may interest you: Microsoft becomes the most valuable company in the world

The Filipino reporter explained how, after an online campaign against her in which she received “about 90 hate messages an hour,” she received a summons for her first case. Since 2018, she has received more than ten arrest warrants for critical information against the Government, published on its Rappler information portal, and was convicted in 2020 for defamation, in a sentence that has been appealed.

“The ultimate goal of all these acts is not only to hit the target and silence him, but also to create a drag effect” to “make everyone believe a narrative that, in my case, was ‘a journalist equals a criminal'”.

The opening session of the TPPA was held in front of more than 150 people at the “Nieuwe Kerk” in the center of The Hague, in an initiative promoted by the organizations Free Press Unlimited (FPU), Reporters Without Borders (RSF) and the Committee for the Protection of Journalists (CPJ), who asked the Permanent Peoples’ Court (TPP) to establish a court of the same name.

The general secretary of the TPP, Gianni Tognoni, said that the killings against journalists for doing their work should be treated in a special way by international law because they represent “the right of people to express themselves freely.”

Tognoni spoke of the “responsibility of the State” in many of the crimes against reporters, a point on which the coordinator of Defense and Attention to Journalists of the Foundation for Freedom of the Press (FLIP), Raissa Carrillo, insisted when she spoke of the murder of journalists in Colombia.

“There is often reluctance to move forward during the proceedings due to the possibility that the State’s responsibility will be discovered,” said Carrillo, because in those cases the investigators “lose a lot of time, one, two or even three years, without collecting evidence.”

Another TPPA witness was Karinna Moskalenko, a lawyer who got the European Court of Human Rights (ECHR) in Strasbourg to condemn Russia for not sufficiently investigating the 2006 murder of journalist Anna Politkovskaya.

“Many journalists in Russia are silenced, they stop being critical out of fear. They don’t necessarily have to be killed, ”Moskalenko said.

After the inaugural session, the TPPA will hold four hearings between January and May 2022 in which the governments of Sri Lanka, Mexico and Syria will be indicted for the deaths of journalists Lasantha Wickrematunge (2009), Miguel Ángel López Velasco (2011) and Nabil Al-Sharbaji (2015).