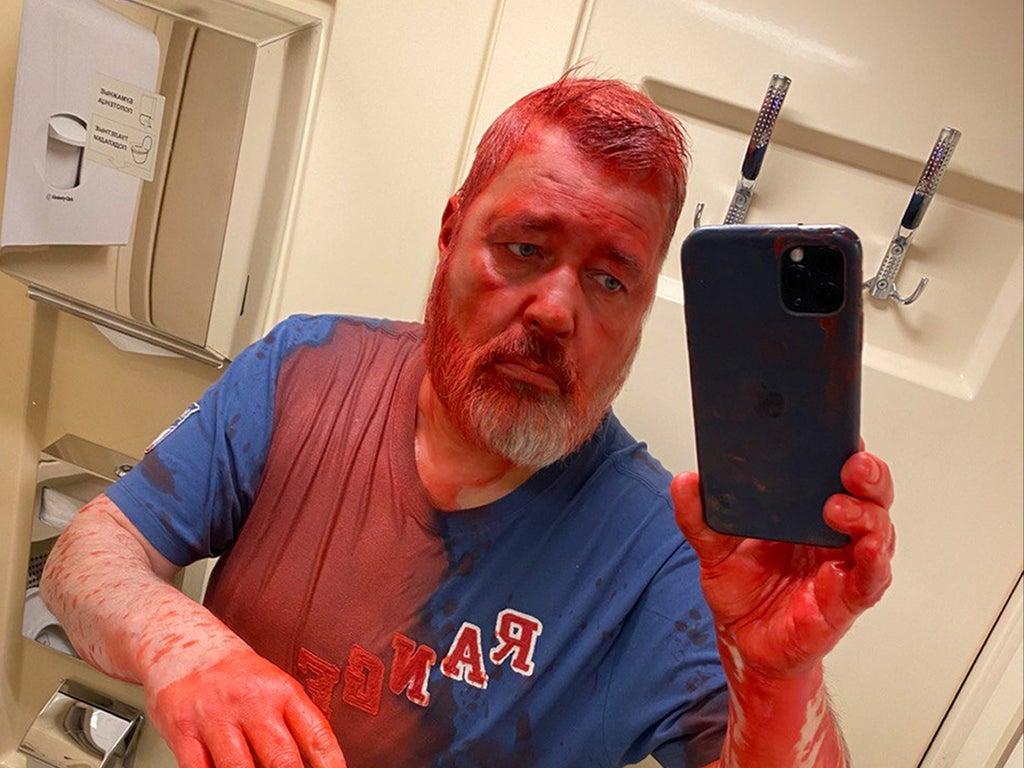 Nobel Peace Prize-winning publisher Dmitry Muratov was attacked with red oil paint and acetone on a train for his criticism of President Vladimir Putin and his media coverage of the war in Ukraine.

Muratov, editor-in-chief of the newspaper Novaya Gazetasaid the attacker spilled the acetone paint on his sleeping compartment on the train traveling from Moscow to the city of Samara on Thursday.

The editor is covered in red paint in images the newspaper shared on social media.

“My eyes are burning terribly,” Muratov said after the incident, adding that the attacker yelled at him “Muratov, this is for our guys,” according to a Telegram post by the newspaper.

A face of Russian investigative journalism since the 1990sKnown for being an active critic of the Kremlin, Muratov received the Nobel Peace Prize last year along with Filipino journalist Maria Ressa for fighting for press freedom under difficult conditions.

Several activists have reported that they have received threatening messages painted on the doors of their apartments in the wake of the Russian invasion of Ukraine.

Novaya Gazetaan independent investigative newspaper, had announced last week that would suspend its print and online activities to the end of what Russia calls his “special operation” in Ukraine, after mounting pressure from the state communications regulator.

The newspaper is no stranger to attacks. In 2018, a ram’s head was sent to the newspaper’s headquarters, addressed to a journalist writing about Kremlin-linked mercenary groups.

In 2020, an attacker sprayed a chemical on the doors of the newspaper’s offices.

Since the war began on February 24, Moscow has cracked down on liberal Russian media. Most state-controlled organizations stick to the language used by the Kremlin to report on the invasion.

In early March, Russian lawmakers passed a law that threatens to punish journalists with up to 15 years in prison for publishing “fake news” about the invasion. The fierce censorship forced several Western media outlets, including the BBC and Bloomberg, to suspend their operations in Russia.

In retaliation, the UK and its Western allies sanctioned state-controlled outlets Sputnik News, Russia Today and other major media entities for spreading “disinformation.”

The Independent is proud of its rich history of campaigning for the rights of the most vulnerable, and we first launched our Refugees Welcome campaign during the war in Syria in 2015. Now, as we renew our campaign and launch this petition in the wake of the current Ukrainian crisis , we call on the government to take more action and with greater speed to ensure that aid is provided. For more information about our Refugees Welcome campaign, Click here. To sign the petition, Click here. If you want to make a donation, Click here to access our GoFundMe page.