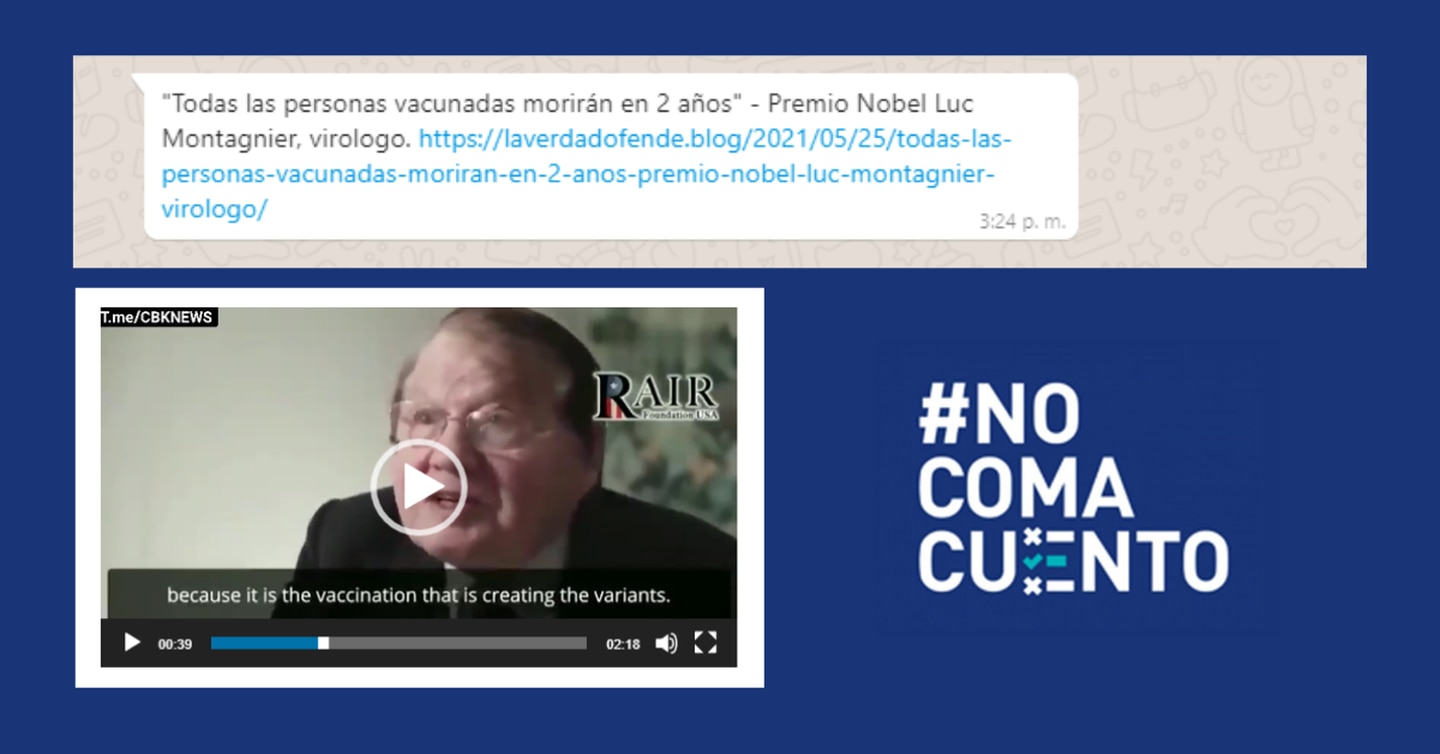 It is not true that a virologist who won the 2008 Nobel Prize in Medicine has predicted that people vaccinated against covid-19 will die within two years.

Messages circulating on social networks and WhatsApp groups attribute this statement to the French scientist Luc Montagnier, but it is false.

Disinformation is spread from multiple websites, both in Spanish and English.

“All vaccinated people will die within two years. Nobel Prize laureate Luc Montaignier confirmed that there is no chance of survival for people who have taken the vaccine,” reads the start of a blog on the Bridgenit web portal.

According to this publication, Montagnier said in an interview that the world “must be prepared to cremate the bodies.”

However, the French scientist has never said such a thing.

Bridgenit allegedly bases her article on video of an interview in which Montagnier speaks out against vaccinations. But nevertheless, The scientist at no point in the recording says that the immunized will die.

Luc Montagnier was the co-winner of the Nobel Prize in Medicine in 2008 for discovering the human immunodeficiency virus (HIV).

However, for months, the 88-year-old virologist has been spreading misinformation related to the covid-19 pandemic.

For example, in the video excerpt used by Bridgenit, he claims that vaccines are responsible for the appearance of variants of the SARS-CoV-2 virus, which is false.

In addition, he claims that the antibodies developed from the injections cause the disease to be more severe, which is also not true.

The American media PolitiFactwhich investigated whether Montagnier has said that those vaccinated against covid-19 will die in two years, found no trace of the alleged statements.

the news network Reuters did not find the alleged claims.

In the video excerpt, what Montagnier did say was that the vaccines create the variants of the virus. However, such an assertion is wrong.

On the contrary, in nature it is normal and expected that, over time, viruses transform into different versions of themselves.

To survive, any virus requires human cells to replicate and continue to spread. Therefore, every time it replicates, it develops changes. That is, it mutates, and that is how variants arise.

Sometimes the changes are minimal and do not alter the way the pathogen behaves; but in other cases, the virus can become more transmissible. This is what has been observed in some of the SARS-CoV-2 variants.

The mutations could also make the vaccines less effective in some people.

However, the evidence shows that vaccination drastically reduces the possibility that people will become seriously ill and die from covid-19.

For example, last November, people over the age of 65 represented 80% of those who died each day from this disease. Seven months later and hand in hand with the inoculation campaign, that percentage dropped to 32%.

What’s more, as pointed out by the means of verification newthral, Variants of covid-19 have existed since before vaccination campaigns began in the world.

“So far what has been seen is that new variants arise with low levels of vaccination and not the other way around and that vaccines slow down its appearance”, he told newthral the immunologist Matilde Cañelles, from the Higher Center for Scientific Research (CSIC) in Spain.

Reuters It also confirmed that it is not true that vaccines trigger the phenomenon of antibody-dependent facilitation (ADE). In other words, instead of reducing the severity of the disease, vaccines increase it.

In a post on your websiteThe Children’s Hospital of Philadelphia explains that this phenomenon has been observed with the dengue virus, which has different variants.

If a person is infected with one of these variants, their symptoms may be mild and they may mount a protective immune response.

But if the same patient later contracts a second variant, antibodies from the previous infection may facilitate the pathogen’s attack.

However, this is not the case with covid-19, nor with the vaccines that combat it.

“Neither the covid-19 disease nor the vaccines have generated evidence of causing ADE. People infected with SARS-CoV-2 have not been likely to develop ADE in the event of a second exposure, ”says the Children’s Hospital of Philadelphia.

–PolicyFact: No, the French virologist Luc Montagnier did not say that those who receive the covid-19 vaccine will die soon.

–Reuters: There is no evidence to suggest that covid-19 vaccines will kill people via antibody-dependent facilitation, the evidence is to the contrary

–Newtral: Luc Montagnier’s claims without proof about vaccines and the origin of the new variants

This information is part of the #NoComaCuento project, an initiative of La Nación that seeks to analyze the veracity of the information circulating on social networks. You can be part of this project by sending us information that seems false or unreliable to WhatsApp 6420-7160 or to the email nocomacuento@nacion.com.

You can also receive our publications directly on your cell phone by joining this group of WhatsApp or to Telegram-bot.

#NoComaCuento: Nobel Prize winner did not say that those vaccinated against covid-19 will die in two years