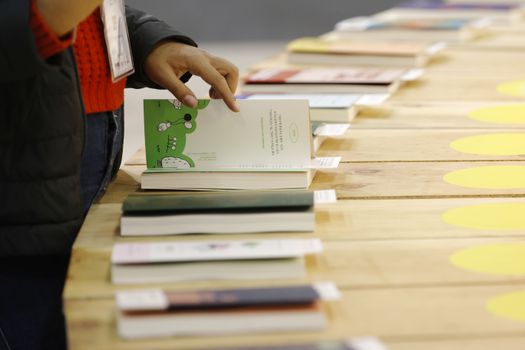 Visitors visit the pavilion of South Korea, guest of honor at the XXXIV Bogotá International Book Fair (FILBo), in Bogotá.

These are hectic times for the publishing industry in Europe. In Paris, the first version of the renewed Hall du Livrenow baptized in its post-pandemic revival as the Paris Book Festival, while in Madrid the Book Fair warms up, a month after its inauguration, with the presentation of its official poster. These two literary festivals, along with the Frankfurter Buchmesse German, are the maximum referents of this type of celebrations in the Old Continent and, for the same reason, they are an interesting comparison against which to evaluate the Bogota Book Fair. An acid test which, I anticipate, comes out quite well.

First, the magnitude. Here Bogotá and Madrid tie for a mere issue of visual perception that is difficult to decant: while in Corferias everything is concentrated in a large block, the people of Madrid unravel their fair in a kilometric row of kiosks that covers the entire length of Paseo de Fernán Núñez in the colossal El Retiro Park. Far behind is Paris, which this year experimented with the central Grand Palais Ephemere behind the Eiffel Tower, gaining in majesty and staging, but sacrificing the capacity provided, until then, by the immovable Gate of Versailles.

We recommend: Narrate the remnants of childhood (Fair Letters)

Second, access. Here Bogotá finds one of its greatest shortcomings, because while Madrid and Paris open their doors free of charge to anyone who wants to come by to browse, in Corferias the barrier of $10,000 to which the visitor is subjected, however justified it may be for logistical expenses , constitutes a competitive disadvantage that conditions many families to a single visit or to look without buying, which directly affects bookstores and publishers, true protagonists of the event. Perhaps, you have to think of an alternative version of the FILBo that is cheaper and more affordable for any pocket.

Third, signings. Here there is a triple tie, since FILBo’s effort to bring Colombians closer to the great stars of the literary firmament is simply titanic. Watching the winners of the Nobel Prize for Literature parade through Corferias, with assiduous frequency, is a luxury that is accompanied by the unmissable presence of our Creole authors. A source of pride that puts us at the level of what Madrid does with the Alfaguara Prize and its prolific harvest of local pens or Paris with the winners of the Goncourt Prize and its countless minor literary awards.

We suggest: Carlos Castillo: “Being Colombian is an odyssey” (Fair lyrics)

Lastly, style. Here everyone is respected. While Madrid is betting heavily on long and multiple book signing marathons that demystify authors to the point of landing them a foot away from their readers, and Paris gives the spotlight to the new and bombastic launches of powerful Francophone publishers, Bogotá opts for an agenda with a high content of social and political debate that seeks not to leave anyone indifferent. Three approaches as heterogeneous as valuable.

(Not so) odious comparisons that allow us to appreciate the considerable literary power of our FILBo, very much on a par with the best European shows.

(Not So) Hateful Comparisons