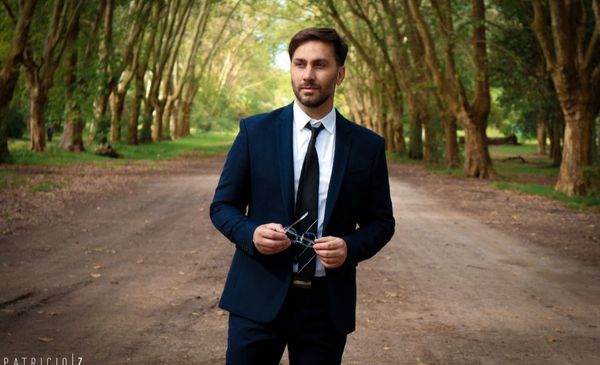 The Italo-Argentine singer and a reference for Peace in the world for his music, Odino Faccia is nominated for the Nobel Peace Prize by the Gorbachev Foundation for his more than 20 years contributing to the culture of peace through his songs and actions .

Odino Faccia, is an Italian-Argentine singer born in Ensenada, Buenos Aires, on August 21, 1974, he is the youngest of 4 siblings, son of Pascual Faccia and Maria Garritano, both Italians. Maria Garritano and Pascual Faccia, are Italian immigrants, who arrived in Argentina between 1948 and 1960, in the largest immigration currents, during and after World War II.

MESSAGES OF PEACE THROUGH MUSIC

In 1998, he began his career as a soloist, and embarked for Italy, the country that adopted him, where he began his studies and began to develop his artistic career, determined to generate social change through music. For 10 years he shares his life between Italy and Argentina, where he develops from music, social activities supporting humanitarian causes.

His beginnings in music were not easy, being far from his country, his affections, and what it meant on many occasions to sing to eat, sleep in train stations for several months, achieving little by little, the arrival of artistic recognition and social, which led him to tour many stages and places, recording musical singles, which mark him during those 10 years between 1998 and 2008.

THE “VOICE FOR PEACE” IN THE WORLD

On March 22, 2009, he received the “Voice for Peace in the World” Award from Adolfo Pérez Esquivel, Nobel Peace Prize winner along with 23 national and international organizations, for his contribution to the dissemination of humanitarian causes, along with the title Honoris Causa of the Autonomous Region of Sardinia, Italy.

Recognition delivered for his journey and for countless activities that Odino has developed; his remarkable work for improvements in socio-culture, they have had a high impact for the common good of many people; a firm path of hard work on awareness through music together with different solidarity activities and developments that were already beginning to frame it as a humanitarian reference, aimed at reinforcing, among other problems to be solved, the values ​​of coexistence.

MUSIC WITH LYRICS FROM WORLD LEADERS

In 2011, he is chosen (without being a religious singer) to interpret and compose with lyrics of unpublished prose and poetry of the Pontiff John Paul II, (today Saint John Paul II)

On April 27, 2014, he sings the song “Look for Peace” at the gates of the Vatican, on the historic day of the Canonization of John Paul II and John XXIII, before Pope Francis and Pope Emeritus Benedict XXIII, in front of 1 million of people present and 2 billion homes that followed it on television, becoming the most listened to song in history simultaneously, reaching a third of the world population with a message of Peace.

On March 29, 2015, at the request of Pope Francis, Odino sings to the entire world, the New Hymn for Peace with lyrics by Pope Francis, entitled “So that all may be one” song that will be reissued in 2022.

His endless sociocultural activities to generate a change in awareness through values ​​led him to the formation of a Foundation, the RED VOICE FOR PEACE FOUNDATION, which he chairs, it is made up of people with a humanitarian profile, from diverse cultures. and countries, in interreligious diversity; dedicated to strengthening the 3 axes that stand out:

Socio-cultural activities: such as concerts for Peace and values, and motivational and awareness conferences;

Solidarity activities: they have a strong focus on collaboration to support needs and solve global problems;

educational activities: Understanding the great importance of strengthening (from childhood to individuals already trained) awareness of the values ​​of coexistence, equity, inclusion and the urgent cessation of violence in all areas, educational activities are developed through training , seminars and workshops to different educational institutions, teachers and professionals from all areas.

The Red Voz por la Paz foundation works to strengthen values ​​in different cultures, having as its motto that “to love is to think of the other”, with the faithful optimism that it is possible if it is done from the heart.

THE ONLY ONE TO SING WITH LYRICS BY TWO POPES

Odino is the only artist in history to share authorship with two Popes, Saint John Paul II and Pope Francis. He was also chosen to develop an album entitled “A new beginning” where the lyrics of the most relevant Nobel Peace Prize winners in history such as Dalai Lama, Desmond Tutu, Barack Obama, Adolfo Pérez Esquivel, Rigoberta Menchu ​​Tum, Shirin Ebadi were sent to him. , Leymah Gbowee and Jodie Williams, among others, placing it in a historic project, where the words of the Nobel Prize winners will be heard in songs, continuing its purpose: to raise awareness through music, for Peace, Values ​​and equality.

20 YEARS CARRYING A MESSAGE OF PEACE AND VALUES

Odino Faccia has been carrying out tireless work for 20 years, promoting the importance of awareness through music, traveling through different cultures, strengthening the value of coexistence, social inclusion and equity, being identified as a global benchmark by Peace and values ​​in the world, restructuring armed consciences, ensuring the Union of peoples.

His history, his journey and permanence, made Odino, through the Gorbachev Foundation of Italy, an Official Candidate for the 2022 Nobel Peace Prize, being the first Italian-Argentine singer in history to achieve said candidacy.