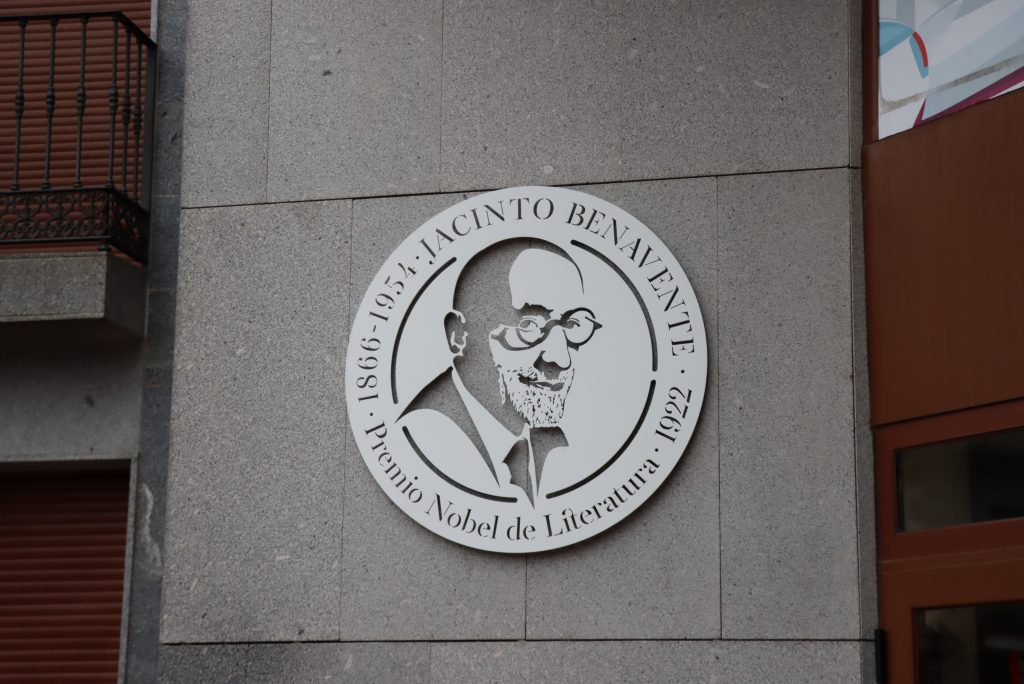 Commemorative medallions of the figure of Jacinto Benavente have been installed in the Ricardo León Library, the Galapagar City Hall and in the “La Pocilla” Cultural Center

12/12/2022: The Galapagar City Council has celebrated today, Monday December 12, the official commemorative act on the occasion of the first centenary of the awarding of the Nobel Prize for Literature to Jacinto Benavente, a tribute to the figure of the playwright organized by the Department of Culture, the Library Ricardo León and the NGO Acervo Intergeneracional.

The official act in honor of our neighbor and Adoptive Son of Galapagar has been inaugurated by the Mayor of Galapagar, Alberto Gómez, and the Councilor for Culture, Rosa María Encuentra; Mª Luisa Fornies, president of the NGO Acervo Intergeneracional; and two volunteer couples who have paid homage to the work of Jacinto Benavente through a shared reading of two fragments of his dramatic work by representatives of the face-to-face shared reading volunteer programs and LeerTe quiero a distance, specifically a fragment of “Beyond Death” (1922) and another of “Holy Russia” (1932).

In addition, the act has had the musical performance of the guitarist Julio Alonso who has interpreted a careful selection of pieces related to the playwright, specifically he has reproduced pieces by authors such as: Erik Satie, a French composer who was a precursor of impressionism born the same year as Jacinto Benavente 1866; Federico Moreno Torroba, prolific Spanish composer who put music to Jacinto Benavente’s “La ciudad alegre y confiada”; and Heitor Villa-Lobos, influenced by Brazilian folklore and European classical music, was a contemporary of Jacinto Benavente.

Likewise, he has been present during the emotional tribute to our Adoptive Son Julián de Castro, sponsor of the campaign; as well as part of the Municipal Corporation and the Government team of the Galapagar City Council.

To end the commemoration of the 100th anniversary of the awarding of the Nobel Prize in Literature to Jacinto Benavente, all the people who attended the event at the Ricardo León Library this morning have been invited to an agape

It should be noted that, as planned within the dissemination campaign “Discover the people’s Nobel”, three commemorative monoliths of the figure of Jacinto de Benavente have been installed on the façade of three municipal buildings: in the Ricardo León Library, the City Hall Galapagar and in the Cultural Center “La Pocilla”.

We remember that the Nobel Prize for Literature was awarded on December 10, 1922. The news of his election as the winner of the prize, as well as the award ceremony, found Jacinto Benavente working on a theatrical tour of Argentina. Far from his homelands, the big one and the small one: our town in Galapagar where he liked to spend time living in the place we know as “El Torreón”

In Galapagar we put the finishing touch with the celebration of this commemorative act, a new tribute to the many that our writer and neighbor already has in this town, a cultural and human exponent that transcends generations and that, from the City Hall, we intend to maintain and disseminate over time

“Today we have put the finishing touch to the first centenary of the award of the Nobel Prize in Literature to Jacinto Benavente with the celebration of an act at the Ricardo León Municipal Library. It has been a very emotional act, in which we have achieved our objective: to promote the figure of our neighbor and Adoptive Son” declared the mayor of Galapagar, Alberto Gómez.

Program of the official commemorative act.