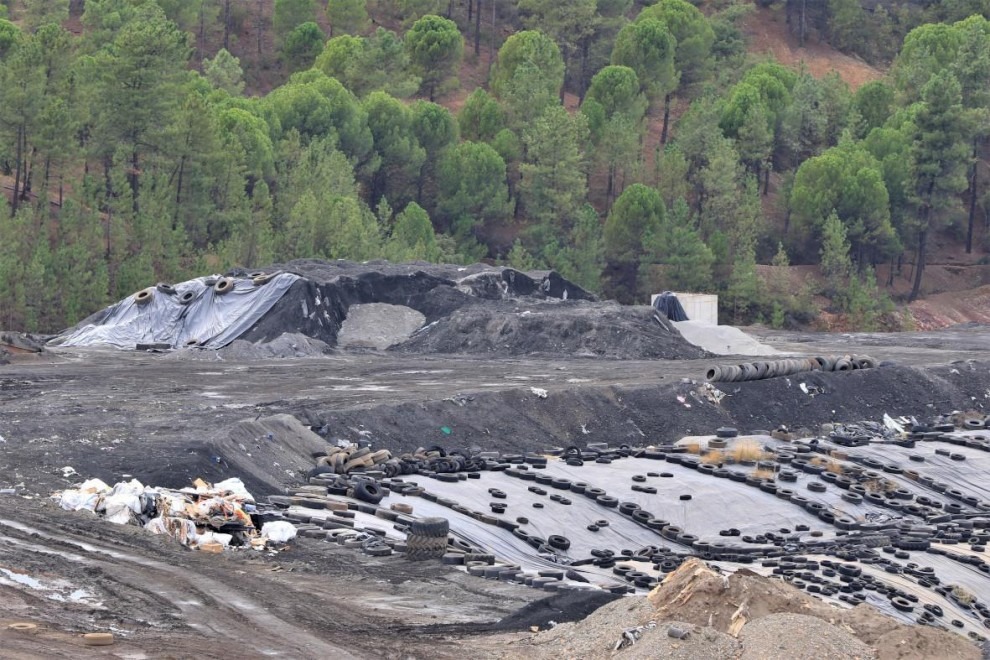 José Manuel Alfaro/ Fiction section ‘Muleman’s Notebook’. Since the doors of the largest landfill in southern Europe were opened on July 30, 1998, many things have happened during more than thirty years of life, but nothing more disturbing than what only the citizens of Nerva know. Years in which all kinds of events have taken place, which began with the breaking of the city’s social cohesion and which, once opened, were joined by the arrival of waste from all over the country and also from neighboring countries, such as Portugal. , United Kingdom, Italy, constant spills on the roads during transport, the construction of a deposit of asbestos, and other highly dangerous and carcinogenic materials, numerous fires, smoke, large dust storms, leaks and even direct discharges into the Tinto riverbed.

Years of activity that have caused the landfill to be currently overwhelmed and clogged, on which it plans to expand both the volume of toxic waste that can continue to be buried, and the operating time of the facility, in addition to the creation of four new lines of business: a plant for the manufacture of solid replacement fuels from solvents, disused vehicle fragmentation parts and other waste, a treatment plant for external liquid waste from any type of industry and a techno-floor plant , which could make Nerva the most important residual city in the world.

New and exciting line of business

But to all this new operation could be added a new and disturbing line of business, which could contribute not only to the expansion and consolidation of the landfill until the year 2100, but could also generate huge amounts of profit for the management company, which could convert Nerva in one of the most dangerous places in the world to live. Although nothing is publicly known about this mysterious activity, which is known only to the citizens of Nerva, 12,000 tons of toxic and dangerous waste from Montenegro are entering through the door of the landfill to stay forever under its subsoil, as he tells us in the following interview, a village elder, who we have randomly selected to answer all our questions.

How many years have you been living in Nerva?

You could say that I have been here since copper was discovered, well not that many years, although we are going to say that when this machine for swallowing hazardous waste opened, I was already passing through life and although people thought that I already I had nothing to lose, I thought quite the opposite, that now more than ever I had to fight not to leave my children, something they did not deserve, so 1000 demonstrations and thirty years later my children have an old man to take care of and a landfill where they can safely take my ashes to be buried as if it were hazardous waste.

A turning point in all these years?

For me there is a very clear and decisive one, July 30, 1998, the day they decided that we should stop extracting more copper from the mines, to bury the most dangerous waste in it. I think that that day something broke in the entire region, but especially in Nerva, where we helplessly witness the birth of that vortex in which they wanted to rewrite the future of our town and that has ended up becoming the symbol of condemnation for the town forever.

At that time, the social pressure exerted by the citizens day after day with more than 1,000 demonstrations, rallies and acts against something that only the citizens and citizens of Nerva knew, that the landfill was for us alone and that that stigma It would not only mark our present, but also the future of some children, who are now the same age as the landfill and who wonder where their grandparents and parents were the day they opened it.

Could you tell us something positive about the landfill?

Nothing, forgive the simplicity of the answer

Everything, forgive again the simplicity of the answer

Will the land on which the landfill is located one day be developable?

I had never thought about it, but it would be nice, to convert the land that is now full of hazardous waste and that shows off that black plastic cover, into developable land with a 50 cm layer of topsoil, on which an urbanization could be built luxury townhouse, soccer and paddle courts, private schools, even a prestigious university from which a Nobel Prize could come out.

An urbanization that could be filled with hundreds of luxury houses, in which retirees who worked in the companies that have their waste buried there could live, so that they could take their grandchildren to and from school every day, while their sons and daughters, the fathers and mothers of these boys and girls were working in luxurious office buildings designing a new landfill extension, doing the weekly shopping or playing paddle tennis in the most exclusive private club in the region.

Is it true that they say there are buried alien remains?

I am nobody to confirm and deny that, what I can tell you is that with all the waste that is buried in that landfill, it would not be strange if one day it were known that the remains of a spacecraft that impacted are buried there. against the earth, generating a mountain of highly dangerous waste of alien origin that nobody knew what to do with, until someone thought that the best solution might be to bury it in Nerva, because there would be no one at the door asking questions, about the hundreds of bodies of extraterrestrials that perished after the impact of the ship against the soil of Montenegro.

Before finishing, could you tell us that only the people of Nerva know about the landfill?

What happens in town, stays in town. However, I have to tell you that if you want you can come and live in Nerva for a while and if you can be as close to the landfill as you can, you will surely end up knowing the disturbing truth that lies under the Nerva landfill.