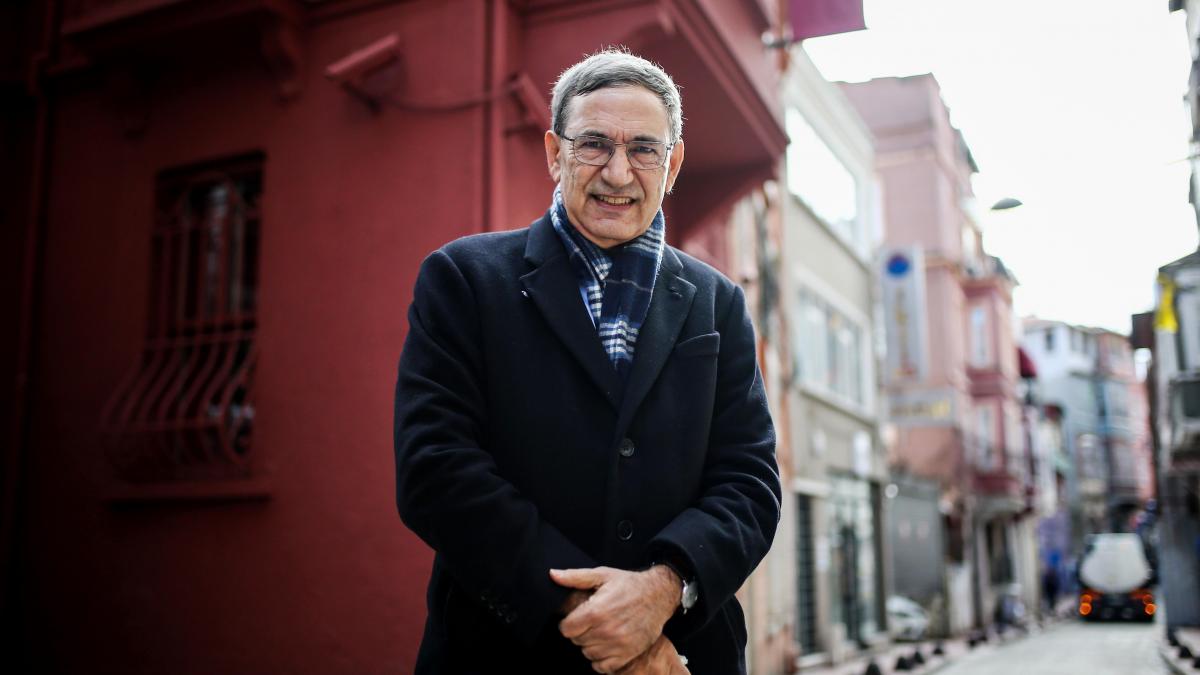 You may not know the small island of Minguer, also called ‘the pearl of the Eastern Mediterranean’. In this province of the Ottoman Empire, in 1901, a deadly plague epidemic spread, causing a prominent expert in epidemics to travel to it by order of Sultan Abdülhamit II, with the mission of bringing to justice a population that little wants to know about lockdowns and health restrictions. Well, surely they don’t know anything about Minguer because it is the imaginary island on which the new novel by the Turkish Orhan Pamuk (Istanbul, 1952), Nobel Prize for Literature, takes place. the nights of the plague (Random House/Més Llibres), which will go on sale next Thursday the 7th. Because of its content, Pamuk has been sued in court for insulting the Turkish homeland and is therefore facing a request for a three-year sentence from jail The writer answers the questions of The vanguard via videoconference, from his apartment in Istanbul with impressive views of the Bosphorus Strait, which he shows, proudly, moving the laptop.

“I was writing about a pandemic in 1901 and suddenly Covid came, I felt guilty”

Come on, you see the boats go by…

Yes. And that building over there is where Russia and Ukraine negotiate, I spy on them from my balcony, I see their entrances and exits.

We have been following him since, in 2001, he was a finalist for the Llibreter award with The house of silence. the nights of the plague It seems to us –excuse the cliché– his most ambitious novel, and we are not saying this because of its size (732 pages).

It is. It explores the rise of nations in the modern world after the fall of empires, packed with colorful characters and themes. It took me five years to write it and forty years to come up with it.

On the house of silence (1983) mention a historian who investigates a work of the Ottoman empire, in the white castle (1985) I deal with the plague of the seventeenth century in Istanbul… I started writing this because in each epidemic, historically, governments become authoritarian to apply quarantines… and I have an authoritarian government here permanently.

The novel is somewhat reminiscent of Snow (2001), since Minguer is also an isolated place where strangers arrive.

Isolation is a great literary invention. A plane crashes in the Amazon, what will the survivors do? That arouses great curiosity. García Márquez or Daniel Defoe have written about castaways because, in isolation, the essence of what is human becomes very visible.

At first, we all look for the island of Minguer on the map of our phone, but…

It is imaginary. Literature has many islands in its geography, beginning with Thomas More’s Utopia. Why didn’t I set it in Crete, where I have lived? Because my place had to be an allegory for something else.

It shows how nations are born…

We see the fall of empires and what rises after their ashes. The king, sultan, shah, kaiser, warlord, whatever you want to call him, disappears, and when he dies, the shadow of God over humanity dies, religion loses weight and a secular nation emerges. To sacrifice yourself for the nation, you need to have some kind of sacred mythology. If God is no longer important enough for people to die for him in war, a secular mythology must be invented. Together with the new nations, we invent great myths, as strong as the old ones.

You are writing this novel and the pandemic breaks out. Does it have shamanic powers? Does what you write happen?

It is pure coincidence. At first I felt a little guilty, although some friends congratulated me. My novel had absolutely nothing to do with current affairs and, all of a sudden, it became a reality. It seemed that this virus had jumped from my pages to the world.

The plague affects some neighborhoods more than others…

It is true that in my novel it is the Muslims who resist the quarantine, much more than the Christians. But the reason is not religion but education. In the Ottoman Empire, Muslims were poorer and less educated than Christians. In general, we are now very educated compared to the year 1901. Only 5% of people were literate and could understand what a microbe was.

The female characters have enormous strength.

He loved opera, crime novels, western culture. He invited Conan Doyle to Istanbul and awarded him a medal. And Conan Doyle mentions him in a Sherlock Holmes story.

There are a lot of tragedies, but we read them with a permanent smile.

I had my doubts. I constantly asked my wife as she wrote: ‘A lot of people die, is it morally acceptable that they make people laugh? You think I’m crazy?’ She told me: ‘Go ahead, Orhan.’

Listen to your wife.

I always listen to him! I read to her what I write every day and she encourages me to continue. What more could you want?

Let’s get serious: for writing this novel they ask him for three years in prison for insulting the Turkish nation. But you are ironic about nations in general, not against one.

I agree but such is life in this part of the world, I am always accused of horrible crimes. I don’t answer, I try to survive and navigate between accusations. The prosecutor says that I am ironic with Ataturk, which is false. Ironic about the generation of new national myths and legends, but that is not something exclusive to the Turks, all nations have done it, you also have your founding fathers and your myths and your hymns and flags, right?

What happens to him is as Kafkaesque as what he narrates in the novel.

The prosecutor questioned me in his office in Istanbul. He informed me of the accusations against me. I answered: ‘On what page did I commit that crime?’ And he was unable to tell me a specific number. Kafka or Beckett would be imprisoned in today’s Turkey. I trust my lawyer, ten years older than me, a man of great experience and wisdom, a founding member of all the ‘communist’ parties that have been banned, who told me: ‘Don’t worry, Mr Pamuk, the complaint will be lost in the intricate judicial mechanisms of this country’.

What does it tell us about the narrator?

She is the great-granddaughter of the Ottoman sultan. In 1982, at the age of 30, I met the heiress to the throne of the empire. She would be our queen today, or her children. She was with her husband, they spoke a different Turkish, very aristocratic and elegant, with many nuances. I will never forget that conversation, which shocked me. They talk like my characters about Dr. Nuri and his wife, Princess Pakize Sultan, referring to you instead of you.

The characters are falling like flies from the plague, but those who remain, suddenly, all change positions in the new regime.

I show the fleetingness of the ambition of power. And the charm of those small countries where, for example, like in Montenegro, the prime minister has been a waiter in New York, or the finance minister of Bangladesh is a former taxi driver. These things fascinate me, they happen in places like Albania, where there is a lot of mobility between classes, you talk to a guy one night in the bar and the next day he is the king or queen of the country. This gives the patina of a fairy tale to a realistic fiction, like the oral histories that some characters tell.

People don’t see him as an action writer, but here there are shootings, a prison riot…

How I like those scenes! They are things that I would like to read, I love riots, prison environments. Unfortunately, many Turkish writers have been in prison and when they got out they wrote about it. I’m lucky because so far I haven’t experienced it.

Not you, but there are 25 writers imprisoned in Turkey in a single year.

Yes, I know them, and I feel very guilty to be free. I have a responsibility to raise my voice but, compared to those brave journalists who have exposed corruption, I am not in real danger and I am ashamed to be compared to them. The other day, I met a friend who had been in prison for two years on the street, I hugged him very tightly and do you know what he said?: ‘Orhan, thanks to prison I have been able to read all your novels!’ . I don’t know whether to be happy…

Erdogan said the Nobel Prize for Literature had been awarded to “a Turkish terrorist.” Then the government spokesman came out saying that he was not referring to me. Sure, sure, he was surely referring to any other Turkish Nobel laureate in Literature! There are so many…”

Did you ever think of leaving Istanbul?

In 2019, Erdogan lost patience, which happens frequently, and in a university he was asked about the newly awarded Nobel Prize to Peter Handke. He doesn’t care about his precious novels, but only that he supported Milosevic, an ally of Russia, so he showed his anger with Handke, the Swedish Academy and declared: ‘They also gave that same award to a terrorist in Turkey ‘. At that time I was at the New York airport, waiting to board for Istanbul, and I suffered thinking about what my reception would be like in a country where the president calls me a terrorist. Then the government spokesman came out saying that Erdogan was not referring to me. Of course, of course, he was surely referring to any other Turkish Nobel laureate in Literature! There are so many… Which of them would he be referring to? This is how you live in Turkey, friend.

What do you think of the Ukraine war?

I hope peace comes soon. I will tell you, first, that they are not all equally responsible, but that it is Putin who provokes it. As Russia was our oldest enemy, Erdogan has aligned himself with NATO and the anti-Western Islamists and the nationalists now agree with the left because they have seen that NATO was not such a bad thing, that is the only positive of all this great horror.

At the end of his book, Minguer negotiates his entry into the European Union. Do we expect the Turks one day?

I was actively involved in the negotiations for Turkey to join the EU between 2001 and 2008. I am sad that it did not happen. With Erdogan we have distanced ourselves even further. I am pro-Western, a pro-European Turk and I say it out loud: I do not like the anti-Western populism that is so fashionable now.

What do you see when you go outside?

People are very angry. Only in the last year, or in six months, my goodness, what inflation! The price of many things has doubled. People are getting poorer and they are starting to get angry with Erdogan. If the elections that are coming soon are really free and fair, Erdogan will lose, I am sure.

How’s your Museum of Innocence going?

We are still open, we have recovered the numbers of visitors prior to the pandemic, we may be the only museum in the world that has returned to the way it was before. Now our audience is Turkish, instead of tourists, because in lockdown my fellow citizens have found time to read my books. They are welcome!

Orhan Pamuk: “Kafka and Beckett would be imprisoned in today’s Turkey”