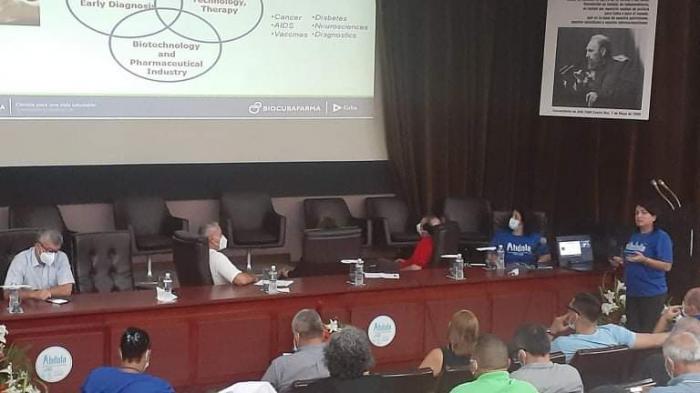 A group of 89 delegates attending the International Meeting of Solidarity with Cuba visited this Saturday, April 30, the Center for Genetic Engineering and Biotechnology (CIGB), in Havanawhere they were able to learn about the process of creating the Abdala immunogen and the Mambisa vaccine candidate.

trade unionists They were received by Dr. Marta Ayala Ávila Ayala, Labor Heroine and General Director of the CIGBwho explained the details of the process of creating immunizing drugs, despite the US blockade that tried to prevent the acquisition of supplies and payment transfers.

The also member of the Political Bureau of the Party explained that thanks to the scientific potential created by the Revolution, the boost given by the Commander in Chief to biotechnology and the decision of the country’s highest leadership to create our own immunogens, it was possible to create in a short period of time five vaccine candidates, of which three are already certified as vaccines.

Dr. Ayala also recounted the CIGB’s contribution to Public Health since its foundation on the 1st. July 1986, through its preventive and therapeutic vaccines, and other products aimed at food sovereignty and care for the environment.

The exchange with the visitors continued with the speech of the executive secretary of the Sao Paulo Forum, Mónica Valente, who thanked on behalf of the workers of the world for Cuba’s solidarity work which was expressed in the 4,000 doctors on the Island who faced COVID-19 in 40 countries, making them worthy of the campaign for their nomination for the Nobel Peace Prize.

You have shown the world how what you have can be distributed fairly, how a country with few resources can become a medical power, thanks to the will of its leaders and its people, she expressed with emotion.

In the same way, a group of Latin American delegates expressed themselves, who contrasted the harsh reality they face in their countries in terms of rights and precariousness of life, with the privileged situation of Cuban workers, true owners of their destiny, who enjoy all their rights. and they are protagonists of the revolutionary epic that began on the 1st. January 1959.

Deputy Prime Minister Jorge Luis Perdomo Di-Lella thanked the members of the First of May International Brigade for their support, and all those in the world who stand in solidarity with the Cuban people and their Revolution.

In his speech, Perdomo denounced the media campaign against Cuba and its socialist system as part of the intensification of the US blockade, and concluded by reaffirming that the Revolution will resist and continue with its development plans.

Also present was the Hero of the Republic and president of the Cuban Institute of Friendship with the Peoples (ICAP), Fernando González Llort.

After concluding the exchange, the delegates toured the scientific center, and later moved to the La Corbata neighborhood to appreciate the integral transformations of that community, located in the municipality of Playa.

I will be in the square

Participants in the International Meeting of Solidarity visit the CIGB