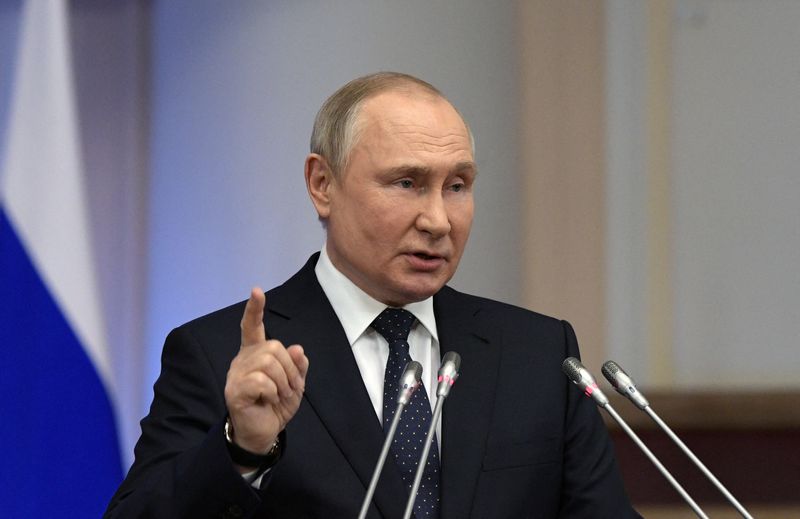 There should be no doubt that Putin is a psychopath, because only then will we understand that he takes pleasure in bombing residential buildings, schools, medical centers and hostels. Cutting off water, electricity and the entry of food or medicine to the towns. The pleasure must be greater when his troops rape women and girls or kill defenseless Ukrainian civilians and then throw them in mass graves. And, without a doubt, he will have reached a paroxysm observing that his planes launch missiles over kyiv at a time when the Secretary General of the United Nations, Antonio Guterres, was in that city conferring with President Zelensky.

Producing fear and pain is, without a doubt, pleasurable for a tyrant who reaches ecstasy at the sight of thousands of contrite human beings walking into exile through authorized humanitarian corridors, which his army bombs from time to time to terrorize them.

Paroxysm also causes Putin to cut off the gas supply to millions of Europeans in the dead of winter with sub-zero temperatures and to intimidate humanity by launching nuclear missiles.

This energy strength means, paradoxically, income of 200 million euros a day for Moscow in the sale of gas to Germany, money that Putin uses to continue destroying and killing.

Relying on the famous work by Sigmund Freud, Introduction to Narcissism, written in 1941, the Spanish psychiatrist Javier La Cruz stated that Putin coincides with the typical traits of a psychopath, such as “narcissism, the omnipotence of thought and sadism. He lacks empathy, presents a false pride, despises the other and seeks power at all times. Then he adds: “it is the maximum expression of the hatred that leads it, inevitably, towards destruction”.

For his part, Vicente Garrido, professor of Criminal Psychology, considered one of the world’s leading researchers on serial killers and the insane, said he had no doubt that Putin: “He is a perfect example of the narcissism, lack of empathy, capacity for deception, manipulation and criminal will typical of the integrated psychopath, who is “discovered” when he finally becomes a mass murderer. The already tangible sufferings for his people do not bother him in the least. He wants to feel the power that is his only reason for existing.”

It is not surprising, therefore, that the Russian Nobel Peace Prize winner, Dmitry Muratov, warns that Putin could use nuclear weapons.

In this context, on February 23 of this year, one day before the invasion and one month before he died, Madeleine Albright, the admirable US Secretary of State, described it in the newspaper New York Times as “a small, pale fellow, so cold it is almost reptilian”, adding that “instead of paving Russia’s path to greatness, invading Ukraine would ensure Putin’s ignominy by leaving his country diplomatically isolated, economically constrained, and strategically vulnerable in the face of a stronger, more united Western alliance. Massive sanctions will not only devastate his country’s economy but also his narrow circle of corrupt accomplices who may challenge his leadership. What is sure to be a bloody and catastrophic war will deplete Russian resources and cost Russian lives, while creating an urgent incentive for Europe to reduce its dangerous reliance on Russian energy.”

75 days after the invasion of Ukraine, we wonder why the Russian government maintains its status as a permanent member of the United Nations Security Council when all the principles of the world body have been shattered. Or we ask, equally, why the democratic countries of the hemisphere do not adopt a united response to these events. Withdrawing the military attachés and summoning their accredited ambassadors to the Kremlin would be an honorable response; in the Peruvian case, more broadly, not to buy Russian weapons, but also not to maintain a deplorable silence in the face of totalitarian barbarism, which is only supported by the dictatorial governments of Venezuela, Nicaragua and Cuba.

Nikolai Patrushev, the main ideologue of Vladimir Putin’s new Cold War
Why Russia could be included in the list of countries promoting terrorism and what implications it would have
Putin raises the threat: is he seriously ready to go to a nuclear war?

Putin, a psychopath at the UN